Resurrection Bay: A story of loss, hope and the love of a father and a son

If I’m going to be perfectly honest, I didn’t like fishing much growing up. That will come as a surprise to many people who have been forced to look at photos of fish I've caught on vacation, or to longtime friends who know I used to be a commercial crab fisherman. 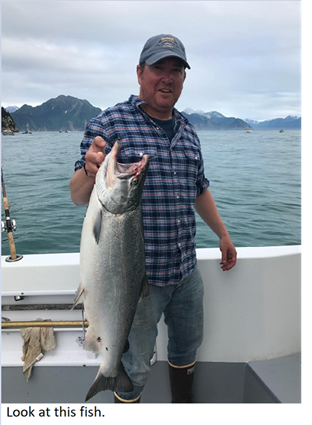 The lack of passion for fishing came to me as a young boy growing up in Alaska, where my larger-than-life father would take me on long, arduous, uncomfortable fishing trips. I remember spending 16 miserable hours sitting on a cold, drizzly riverbank in the interior with nothing to eat except soggy baloney sandwiches and warm Diet Coke. We often caught nothing at all. I also remember taking long trips out to the deep water off the coast of Alaska to fish for salmon and halibut. I’d hold on to the side of the boat and puke out what felt like my stomach lining.

I remember sitting in a boat on the Deshka River with my dad during a trip in my late teens or early 20s. It was deep into the evening and, as is often the case in Alaska, cold and wet. My father and I had spent the past several hours catching literally nothing. I heard a call out from the bank: “Mike! Why are you still out there? Tie up your boat and have a beer!” There was a big, warm fire on the beach. All the other fishermen who had long given up were crowded around the fire, eating and drinking. My father looked up, then waved his hand dismissively. “Bah,” he said, and went back to fishing. That’s when I realized that my father was not a normal person. That he was sort of crazy.

I would not change one single miserable moment I spent with my father on those fishing trips. They are part of my story and I cherish the identity I’ve created for myself around them in my head. And I cherish the time I spent with my father, who was, as I was growing up, the coolest human being ever to exist in history. Being a slight, bookish boy, mismatched with my giant, outdoorsman father, partly made me who I am today. Or at least that’s what I tell myself in my story. 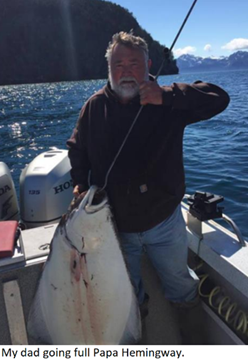 Alaskan summers, short though they are, are glorious, bright and beautiful. The sun barely ever sets. My father spends his entire summer in Seward, Alaska, living in a small RV and fishing most days. My dad has buddies who also share the same campground. They look out for each other on the fishing grounds, check up on each other over the radio, and often spend their evenings together, eating dinner and drinking Miller Lite at the RV camp. They talk about the next day’s weather and debate whether it’ll be safe to go out.

Every summer I join my father and his merry band of buddies for long, marathon fishing trips on my father’s boat – the Caitie C, named after his granddaughter, who lives near him in Anchorage. We motor out in the Caitie C an hour or two to the fishing grounds, and motor back with fish to clean and vacuum seal. I’ve come to enjoy the trips now that I’m an adult. I’ve managed to get a handle on the seasickness, and the hours aren’t dreary like they were when I was a child. The best part is, I get to spend time with my dad.

Winters in Alaska, unmercifully long, can be as miserable as the summers are glorious. They are cold, dark and stifling. The lack of sun and warmth and the difficulty getting anywhere weigh heavily on every Alaskan. It is a time to fight cabin fever, fight depression, fight sickness and fight the other sinister demons that creep in as the sun recedes. It’s a slog to make it to April, when the sun fights its way back into the sky and the snow (partly) melts. For my father, it means unwrapping his boat and preparing for the first outing of the year – shrimp season. It is literally what he lives for.

This past dark winter was harder than the others. It began with a call from my father letting me know that his wife of 30 years had been diagnosed with Stage 4 renal cancer. They prepared themselves for a long, drawn-out fight, but the fight wasn’t long. After just five weeks, she passed away on the day before Thanksgiving, leaving my father to endure the winter alone in his house for the very first time.

After flying to Alaska to be with him in those first days, I was able to convince him to come down and spend the holidays with me. My father is always happiest, strongest and at his best in the summer in Seward. My goal in helping him deal with this extraordinary loss was to get him through the winter and spring, and then into his RV surrounded by his best friends. If I could do that, I could help him get past the debilitating grief that almost certainly was going to be magnified by the harsh Alaskan winter. So, I concocted a plan.

I looked for short-term markers — events that would allow him to have something to look forward to in the immediate future. First, it would be a December stay with my family in Seattle. We'd make tons of food, and we'd party. He agreed. Then, when he was here, I tried to talk him into staying for the whole winter. He balked. I asked him to stay for five weeks or a month. He balked again. I got three weeks. Then I dangled a combination in February of the Seattle Boat Show and a HUGE Super Bowl party throw-down, and he bit and came back down for that.

Another goal I had was to get him to buy a new, bigger, nicer boat. If I could get him to buy a new boat, something he’s wanted to do for a long time, he’d really have something to look forward to for the summer. The strategy worked, and it turned out better than I ever could have imagined. Not only did he buy a boat at the Seattle Boat Show, but he bought a boat that would be built exactly to his specifications here in Washington. He’d have to come down to Washington a few times over the winter and spring months, and I’d go up there between those trips. I would manage the boat-building project from here, which meant I’d have lots of stuff to talk about with my dad. The boat would be finished in June, just in time for the summer season. And, finally, we would drag the boat to Alaska on a road trip over the Alcan to Seward. The plan was perfect. It. Was. Perfect. The only problem that could thwart my efforts was this coronavirus that was emerging in the news as a potential threat. 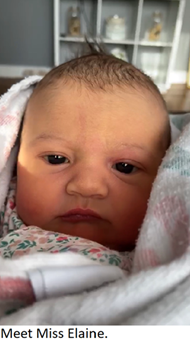 I talk to my dad every day now. I’ll call him after I run; I walk a few extra blocks with my dog while we chat. There’s not a lot to talk about, especially now that work on the boat has stopped. We talk about the mundane aspects of our day, what projects he’s working on, a rod and reel he’s rehabilitating, what he’s making for dinner. It’s not tedious. I really look forward to the conversations, and they’ve become a way to help me cope with the anxiety and boredom the pandemic has brought. I’m worried about my father, but not too worried anymore. He’s been hanging in there, and he took the shelter-in-place order – or “hunker down” order, as they say in Alaska – very seriously. That is huge relief to me because it could have easily gone in the other direction with him. He took it seriously, though, for a special reason: He wanted to meet his new great-grandchild. That happened on April 9.

After my niece Caitie gave birth, she called my father on FaceTime, held up her newborn baby and said, “Hi Grandpa, I want to introduce you to your great-granddaughter, Elaine.” He had kept himself in the dark on her gender because he wanted it to be a surprise, so it also was a surprise to him that she was named after my late stepmother. And damn if that baby doesn’t look like her.

We’ve made it to June, and everything is OK. Nothing is truly canceled, just postponed. We’ll still work together to get that boat built. And he’ll still come down to pick it up – maybe later this summer, maybe next – and we’ll both drive to Alaska together. We’ll lash a cooler of beer to the deck and sleep in the cabin on the way up. We’ll play cribbage in the evenings. There might be a bottle of whiskey. And when we get to Seward, we’ll launch his new boat, the Miss Elaine, into Resurrection Bay and catch some fish.

I’ll end this here so I can go call my dad. He made a beef Stroganoff last night and I want to hear how that went. 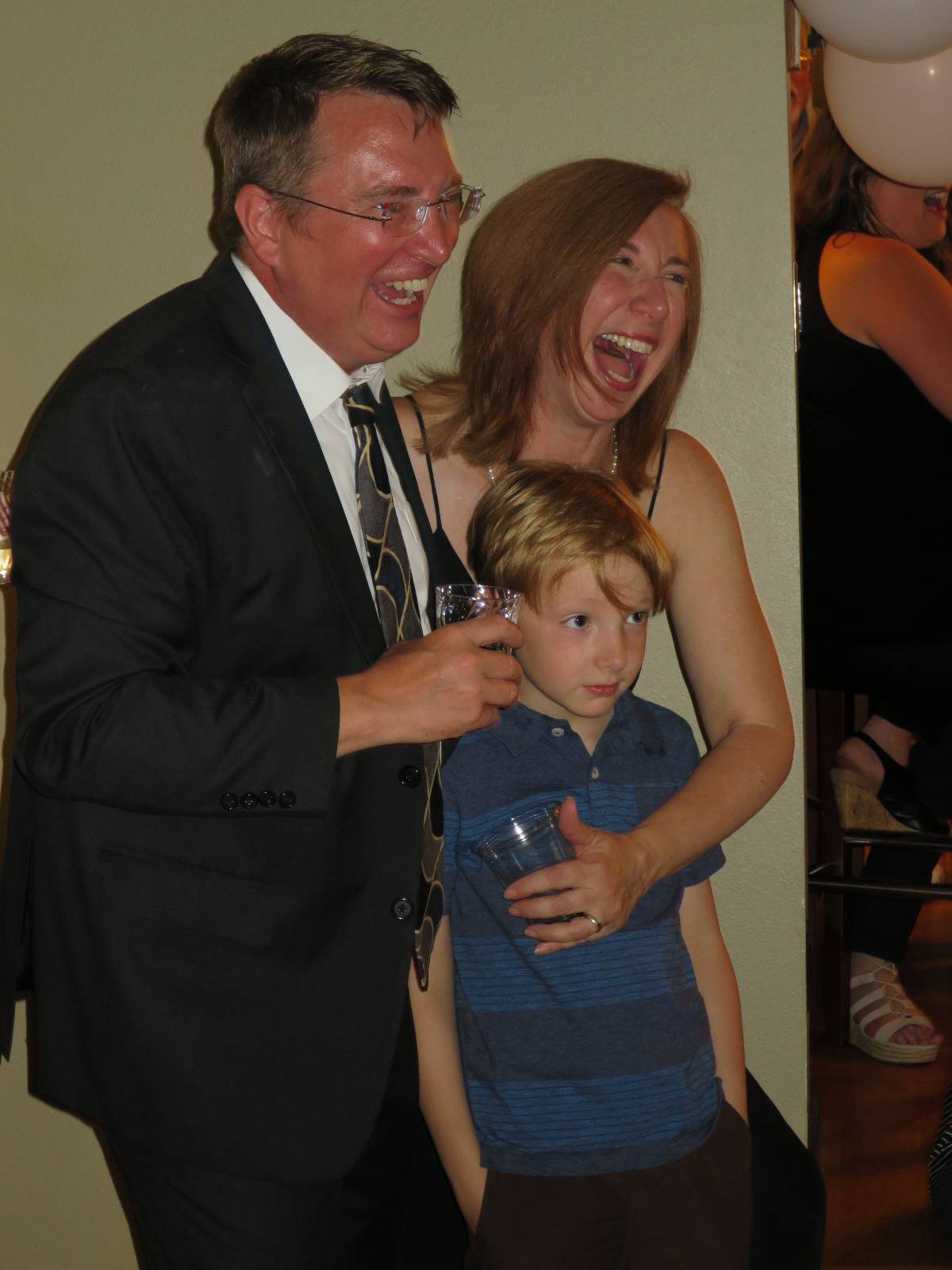 Michael Wann is a fun-loving husband and dad who works as Director of Microsoft Stories. He’s the former Managing Editor of NBCNews.com.

My Husband's Passion For Fishing Has Our Family Hooked
When you can't celebrate you dad on Father's Day
I didn't have a dad, but my son does
advertisement

My Husband's Passion For Fishing Has Our Family Hooked
When you can't celebrate you dad on Father's Day
I didn't have a dad, but my son does