Published by Britt LeBoeuf on September 5, 2019

I think it started sometime even before this photo was taken. The anxiety I know started when I found out he was breech and would be born via a planned c-section in a middle of a snowstorm, only to be told that the cord had been wrapped twice around his little neck upon the doctor pulling him out of my body. Nobody spoke the words that we all though, but I thought them over and over in my head, "he could've died."

I puked on the operating table. While some of my friends that had pushed out their babies had shit out the other end, I had the anesthesiologist holding a urine basin next to my face as I wretched violently into it while the doctor put my insides back inside, where they belonged, and my husband followed his new son down the hospital hallway because that had always been the plan, for him to follow him and not worry about me.

As they placed him in my shaking arms, with my lip quivering from some unknown force, maybe from all of the meds and maybe a little bit of shock, I looked at my son for the first time and though I knew I loved him I had a hard time showing it the way I wanted to.

By the time they got us set up in a room the pain hit me like a MAC truck and Kevin needed to hunt a nurse down to give me something to ease it even just a little bit. I watched as my mother-in-law held my son and though I was grateful to have her there, I felt it deep in my heart that this wasn't the way it was supposed to be. Not how I had pictured those first few moments with my long awaited baby.

In the days following, I pulled myself out of that hospital bed and held my insides as the three of us took our first walk as a family down the hospital corridor together. I felt outside of myself in those early days.

As we went home the crying intensified, both from the baby and from me. It was more or less determined that my son was going to follow in my footsteps and be a colicky baby his first few months of life. I'd cry in the kitchen because I didn't know how to ease his pain but also didn't know why I was so terribly sad during what should have been the happiest time of my life.

The thoughts came swiftly and they seemed totally normal at the time. My mind hatched ideas of running away in the middle of the night and starting a new life in some town nobody knew my name or face. Then I'd find myself imagining different ways I'd do it, would it be with pills, in the claw foot bathtub upstairs or maybe I'd just run my car into a telephone pole when it was just me in the car? I look back now and realize how lucky I was to not want to harm my son the way I wanted to harm myself and in reality came very close so many days in a row.

I'd look at him for the longest time when he slept in his swing or on my chest in the middle of the night. Those were the peaceful moments between the crying and the exhaustion when I could almost feel myself trying to crawl out of the massive hole I'd fallen into. I felt like I was yelling at the top of my lungs deep in that hole, but nobody could hear me. And at the top of it was that sweet little boy I knew needed me to get out so he could meet his real mama.

The fighting between two new parents is perhaps the most tragic. He knew something was wrong, but this was the first time he'd walked this path too and he was fighting his own demons that he couldn't talk about at the time.

It took two months for me to get help with my postpartum depression. 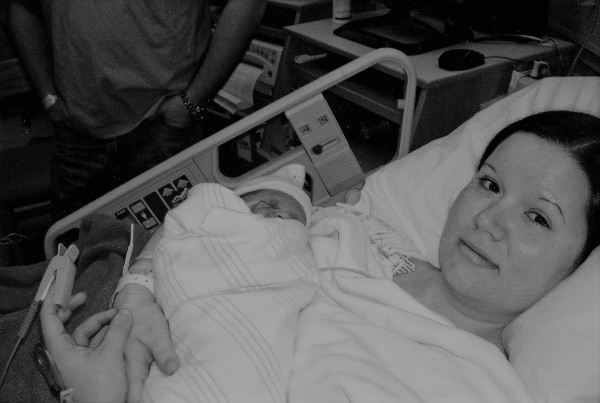 Me trying to smile through the pain after the birth of the boy that made me a mama.

Postpartum had tossed a plastic bag over my head and I was fighting to breathe and break free from it even before I gave birth to my son.

Postpartum made me feel like I didn't truly love that new little person I'd waited my whole life for, and with that brought feelings of shame like I'd never known.

Postpartum made me feel like a less adequate mother, wife, friend and daughter. It stole away any joy I could have experienced in those early days with my son.

Postpartum nearly took my life. I think it might have had I waited any longer or hadn't had the people in my life speak up about the importance of getting help.

Postpartum is like a thief in the night, it comes up fast behind you, grabs a hold and for as much as you try to fight it off, sometimes you can't before it's all over. Then you are down in the abyss and there's no way to climb out without some sort of lifeline.

So new mama, take that lifeline. Please, for the love of all things holy and sacred, grab onto that fucking rope and pull yourself out of that hole with everything you've got! It'll be the hardest fight you'll ever be in, but my God, you and that sweet little baby you dreamed of, longed for, and finally got needs you more than you know. So does everyone else that calls you theirs.

Postpartum would grab a hold of me one more time before I was done, but thankfully not as bad because I knew what to look for. Just know that you are not alone! You never really were, despite what PPD told you. Help is always there, you just have to ask for it!

Disclaimer: Any statements made here were from when I suffered from Postpartum Depression nearly 7 years ago. I in noway have any self harm intentions or intentions of hurting anyone at this time! I share this story so that other new mamas or not new mamas going through this, feel less alone.