Please Stop Telling Me How Fast it Goes 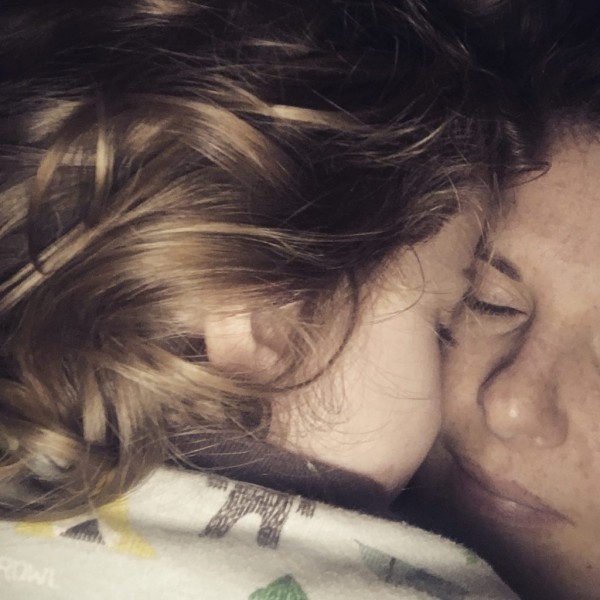 I stood in front of the mirror in my bathroom wondering if what I saw in the reflection was real, a trick of the light, or just a by-product of a hallucination brought on by severe sleep deprivation.

It was early evening and I was trying to figure out a way to get that morning’s eye makeup back onto my eyes instead of pooled down around my cheekbones, and what I saw under my eyes made me stop, blink hard, and catch my breath.

And I don’t mean those little creases around your eyes that are a pretty reminder of how much time you’ve spent laughing at the sweetness of your lovely life.

No, I mean actual bags, fleshy coin purses that resemble turkey skin–after it’s been plucked of its feathers but before you’ve roasted it to a golden crispy brown and then eaten it all with your fingers while your family waits for you to serve them Thanksgiving dinner.

I met some friends for dinner later that night–the very reasons I was trying to fix my eyeliner at a time of day when normally I would be hurriedly exchanging my bra and my buttons for fleece and elastic–and they made the mistake of asking me how I was.

“Wrinkly.” I replied, showing them my eyes.

“Have you been sleeping?” one asked me. These were two of my very favorite kind of women- meaning they enough older than me and put together enough that sometimes I can trick them into mothering me.

“Funny you should ask,” I answered, and went on to tell them both in way too much detail how the night before I had been in that magical in-between place right before you fall all of the way asleep; where one second you are lying there having rational thoughts about all of the things you set out to do that day but failed at and the next you are floating along a Venetian Canal with Marky Mark; and Luca rolled over and pressed his mouth up to my ear hole and screamed “MOMMMY” directly into it with more force than a three-year old should ever be able to muster.

I had immediately tossed MM overboard and swam up to consciousness, my heart pounding in my ears and my adrenaline flowing, fully expecting to open my eyes to a child in the process of being kidnapped from my bed or at least dangling from the mouth of a large jungle cat. What I saw instead was that he was already back asleep, his face a peaceful lie that showed no sign that he had just brought his mother as close to a heart attack as one should be brought without a defibrillator secured somewhere on premises.

“Wrong? Oh, nothing. He does that a few times a night.”

And since I was on a roll and had their attention I went on to tell them how this is inevitably followed an hour or two later by a visit from his older sister, who is more subtle in her waking style. Instead of screaming into my ear hole she will just stand next to my bed and bore holes into my skull with her eyeballs–creepy ax murderer psychopath style–until I wake up.

I sat back and waited for the rush of sympathy, the knowing hand patting my arm, the look that says “I’ve been there and I know how hard this is,” but instead this is what I got:

I hear this a lot. I imagine anyone with small children does. In the interest of full disclosure, I think I’ve even said it myself, or scrawled it on a baby shower card, some lovely wordsmith version of this crap like “enjoy every moment, it will be over before you know it…” or the always tasteful “the days might feel long but the years are fast.”

There’s a problem with this though, and it’s not just that it makes me panicky and sweaty and does little to satisfy my immediate and insatiable need for consolation.

I know it goes by fast. I can feel it ticking by at an ever increasing rate, like sand falling out of my fist even as I clench my hand tighter around it.

I have actually wasted whole lunch hours at work looking up Wikipedia articles on physics trying to understand if there is actual science behind why as I age, the years seem to fly by so much faster. There were years when I was a child–age six was a particularly long one–that just dragged on forever, one lazy long day of too much idle time bleeding seamlessly into the next.

But ever since I had kids or turned 30 (or stopped sleeping) there are whole stretches of time I can’t even remember having occurred, like how you can recall getting into your car in the morning and the next thing you know you’ve arrived at work but you have no memory of the actual driving itself. I’m fairly certain if things keep increasing at this rate whole years will fly by like that, blurred scenes in my memory of rushing to and fro and the endless buying and consuming and laundering and waking in the night again and again until one day I finally sleep through the night only to see I’m 84 and under my eyes are skin bags large enough to house a whole Christmas village.

And every time someone tells me how its goes by so fast with that sad look of lost nostalgia on their face I feel like a total and complete asshat for whatever it was I just complained about, which is extra crappy because then I have the double whammy of (a) being a complainypants and (b) hating myself for it.

Because here’s the thing: there are things I am not going to miss. I don’t care what anyone says, I will not miss night terrors- Luca’s or mine. I will not miss the diapers that overflowed and leaked toxic things out the corners onto every upholstered seat in my house before someone noticed. I will not miss scraping puke out of the edges of car seats with my fingernails or potty training or being WOKEN UP EVERY HOUR OF EVERY NIGHT BECAUSE THIS IS WHAT THEY ACTUALLY DO TO TORTURE PRISONERS IN SOME COUNTRIES.

I won’t miss these things and I know this and so when they are happening and I am laying there thinking “I can’t wait for this part to end,” I can’t help but think of these sweet friends who remind me in their honesty that when these parts end, so do other things. Like how when I pick up Luca he throws his arms around my neck and clings to me like a little monkey to a tree, or how when I walk in the door from work he runs to me and his head presses right into the soft spot in my belly where he came from. Or how after I recover from the midnight shock of opening my eyes to see Gabby’s wide-eyed outline in the dark only inches from my face, I move over and she climbs into my bed and falls instantly asleep and I can align my breath with the soft sweet rhythm of her thumb-sucking.

And more even than all of that I KNOW I will miss the magic of all of my babies being asleep at the same time in the same house.

I know that so hard that it makes me want to not even waste my time with a silly thing like sleep.

“So what you’re saying,” I blurt out excitedly to my friends after running this convoluted logic around through my head, “is that really they are doing me a favor by keeping me awake?”

And of course they had no idea what I even meant, but they loved me enough to nod their heads and flag the waitress over so I could order another glass of wine, and possibly a blanket and pillow, because that is how your friends mother you when they can tell you need it most.

To Mothers Sending Their Sons Off to College
Dear Moms of Teens, The True Magic of Christmas Wasn’t When our Kids Were Young. It’s Now.
Why I'm Still Selfish Even After All These Kids
advertisement

To Mothers Sending Their Sons Off to College
Dear Moms of Teens, The True Magic of Christmas Wasn’t When our Kids Were Young. It’s Now.
Why I'm Still Selfish Even After All These Kids