An edited version of our family’s story about international plane travel, was shared on the TODAY Show media channels over the past few days. The unedited version can be found here.

In true internet fashion, the opinions were abundant, both positive and negative. Many had been in a similar experience, but many clearly had not and felt the need to call me "selfish” for traveling with my youngest, that I obviously did not know how to parent and my favorite "I needed to set clear expectations for him." After 3 boys, I practically have a PhD in setting expectations and handing out punishments.

What they did not know was this trip had been planned for months, before the first flight. We were traveling for my children to meet my husband's family and see where their father had grown up as a child. Fortunately, I was born with thick Irish skin toughened by years of victories and failures. It still may be unable to withstand sunlight without being lathered in SPF 70, but after 15 years of being a mom, it has become a shield for parenting opinions and criticism to roll off of.

The irony is the original article had two paragraphs which discussed not passing judgment on fellow parents and maybe choosing to replace it by offering grace instead. It costs absolutely nothing to extend grace to another person and at the same time, may mean everything to the person it is being offered to. It is certainly something that we could use a lot more of in the world.

Imagine if we approached racers running a marathon the same way mothers are approached and sometimes attacked concerning their parenting abilities. If the spectators spread along the race course offered criticism, judgment and opinions to the struggling runners ready to quit. "YOU ALREADY HAVE A CRAMP!?! YOU MUST NOT BE RUNNING RIGHT!!"... "YOU NEED A WATER BREAK ALREADY!?! I NEVER NEEDED A WATER BREAK THIS EARLY!! YOU OBVIOUSLY DIDN'T SET CLEAR HYDRATING EXPECTATIONS!!"..."WHY ARE YOU RUNNING SO SLOW!?! YOUR SELFISH RUNNING IS INTERFERING WITH THE PACE OF THE OTHER RUNNERS!!... YOU CLEARLY NEED NEW SHOES! KNEES TO CHEST, MARY!"

Unfortunately, many continue to assume that a willful child who may take a little longer to understand their emotions and boundaries is a direct result of a lack of parenting. However, in many cases those parents are working twice as hard. Believe me, I have been on each side. I am lucky enough to have had the opportunity to parent two children with fairly easy going personalities first. I am also lucky enough to be humbled by a head strong, independent little wild card, so when I see another mom struggling I will never hesitate to say "I know it's hard, I have been there. Keep pushing, you are almost done running uphill. Let me tie those laces for you. Better yet hop on, let me help you to the finish line.”

Two years later he was the mayor of the plane and was sure to fist pump the pilots as a thank you and tell them they were doing a great job. 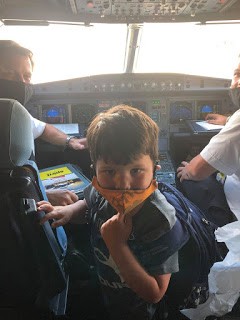