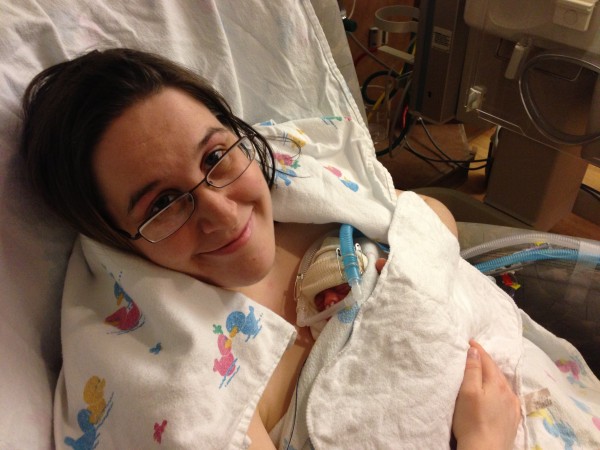 it took us years to get pregnant with our first, so in Oct of 2012 when we found out I was pregnant we were overjoyed. The pregnancy was uneventful until March of 2013 when I unexpectedly lost my father on Good Friday, by the following Monday morning I woke up bleeding. We rushed to the local hospital where we found out I was already 4 cm dilated, at only 26 weeks along my pregnancy. They rushed me to a hospital with the highest level NICU. I was put on bed rest and given magnesium, this stopped my labor for 2 days. I awoke again on Wednesday, they had just taken me off of bedrest, I had bleeding again. They came in and I was 8 cm dilated, her positioning was checked and she was breech, so they took me away to deliver via C-Section. At birth she was 26 weeks and 6 days, 2lbs 2 oz and 14 in long, The attached picture is the first time I could hold her at 3 days old. she needed help breathing with a CPAP she was jaundiced and needed the bili lights, and was unable to eat or maintain body temperature. The doctors feared a blockage in her intestines so sent her to the local children's hospital, or thankfully didn't see anything of concern. One of the scariest times of my life, following an ambulance with my tiny baby, driving down the highway. During her 107 day stay we battled MRSA and a yeast infection in her blood stream, slowly moved from CPAP to nasal canula, increased her tube feeds until she could eat on her own, had skin to skin contact nearly every day. We finally got to dress her for our first Mother's day. My mom got diagnosed with stage 3 cancer while on vacation. We celebrated our due date passing. When we finally got to take her home she was still on the lowest oxygen setting for her nasal cannula. They said her fiestyness helped her conquer the NICU, that fiestyness hasn't changed, When we were home for about 6 weeks her medical team took her off the oxygen and we haven't looked back since. She is now a strong independent 4 year old!