Our Summer Mantra: Is It Worse Than Cholera?

Published by Kelly Suellentrop on July 8, 2015

"They just don't know how good they really have it."

That was the consensus among my friends at the pool the other day, as we waded in the shallow end, keeping an eye on our swimming children while chatting. The conversation was one that happens between parents who have hit the wall when it comes to surviving June, July, and August...and whose children may or may not have just made the comment that swimming at the neighborhood pool was boring because it doesn't have a slide.

We have come to that point in the summer when things start to wear. The novelty of being out of school is over. We've already taken our vacation. A moratorium was called on scheduling camps and activities every week when both the family minivan and wallet each made motions that they also get a summer respite. And with me working from home more hours than before, well, things have been a little slow for the children around our house.

When things are slow, my kids seem to fill their free time with finding things to complain about. Like pools with no slides. Really?

Don't get me wrong, I think that sounds fabulous. I mean, that's pretty much the way I spent all of my childhood summers (except for the Tang. I lived on Hi-C Ecto Cooler, because I was an 80's kid). And it has pretty much been my general modus operandi as a parent as well (even before it was trendy). But let's face it, trying to convince my children of how cushy their lives are by starting a sentence with, "When I was a kid..." is futile. Because things were awesome when I was a kid...and still quite cushy.

No, I needed to really drive home the "first-world-problem-ness" of their first world problems if I was going to make it to the start of a new school year with any shred of sanity. Something that would shut down their whining about Disney Channel never running new episodes of their shows, or that I don't run to the store to immediately restock the bag of chips they just finished a day after I bought them

Then the heavens opened, and God gave me one of those winks like, "I get it. My son complains every time I ask him to die for the redemption for humanity. Kids are selfish a-holes sometimes."

I was discussing one of my daughter's summer reading books with her, and the answer became clear (as did another reason why I wholeheartedly support mandatory summer reading assignments for students). My saving grace came in a book titled, The Great Trouble: A Mystery of London, The Blue Death, and a Boy Called Eel by Deborah Hopkinson.

"Mom, did you know there was this thing called cholera and it killed like everyone? Even babies. Even kids."

"I know. We are sure lucky to live in a time with things like vaccinations, good health care, and better sanitation. It's crazy that kids like you had to worry about dying. It kind of makes being asked to put away your laundry seem like not such a big deal, huh?"

"By the way...go put away your laundry."

And just like that, our summer mantra was born: Is it worse than cholera? 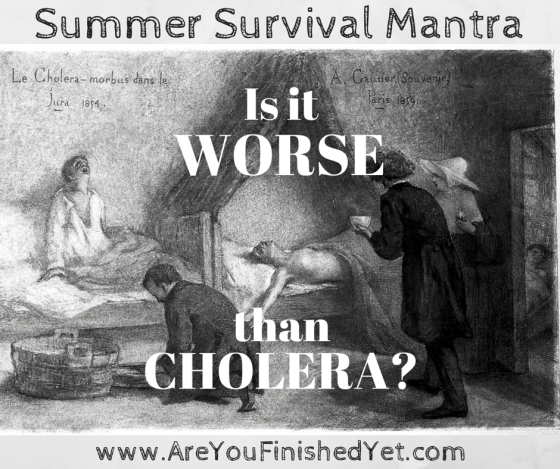 I don't want to go outside and play. It's too hot...Is it worse than cholera?

I don't want to stay at the pool. None of my friends are here. And I don't care that yours are, and you just poured yourself a nice little cocktail...Is it worse than cholera?

There's a fly on my hot dog, the sun is too bright, and I'm getting mosquito bites everywhere...Is it worse than cholera?

What do you mean we're just staying home today?...Is it worse than cholera?

The beauty of this mantra is that whatever they are complaining about is NEVER WORSE THAN CHOLERA. Ever. These five little words may not really convince my kids to appreciate how good they have it as much as I would like. But at least I don't have to hear them complaining further about all the things they shouldn't be taking for granted.

And THAT is enough to make me hopeful I will indeed survive the summer...and not die of cholera.