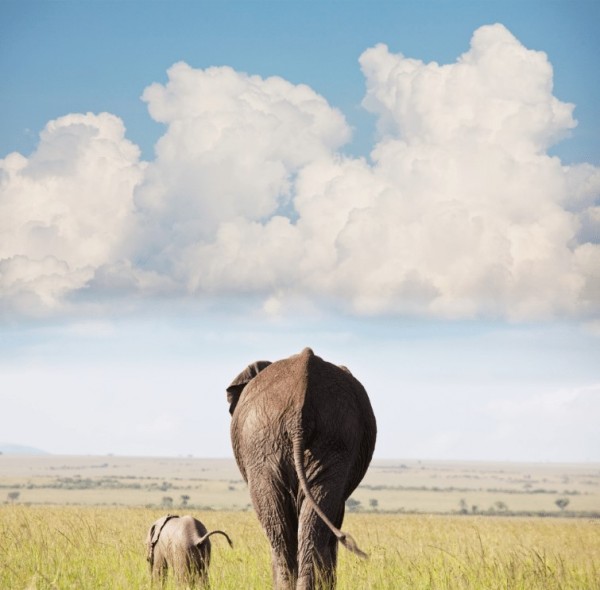 It has been over 20 years since I was in medical school and heard about the research of Gus van Dyk at the Pilanesberg National Reserve in South Africa. It has stayed with me through the years, and while I’m not a psychologist and am not sure you can exactly extrapolate the behavior of elephants to humans, it still fascinates me.

The story went something like this. To help with overpopulation of elephants at one nature preserve, a group of young elephants, ages five to eight years old, had been moved from the nature preserve of their birth to another. Fast forward a decade or so, and the transplanted, now-teenaged elephants began to experience heightened aggression and stir up trouble in their new home. They were fighting amongst themselves, acting unruly, and killing white rhinos who lived on the preserve. They were a gang of adolescent elephant troublemakers.

Mr. van Dyk traced the killing of the rhinos back to the elephants, but not to all of them. It was specifically the adolescent male elephants who were causing the destruction. His solution was to transplant adult bull males to the Pilanesberg reserve. Once the bull elephants were around, very quickly, the teenagers recognized the dominance of the alpha males and their behavior changed. Once the adult males were around, the teenaged elephants fell into line. No more white rhinos were killed.

When my son was about 4 years old, he had a royal blue balloon from Chick-fil-A. He carried that balloon around until the helium went out, and it finally popped. My son was sad about the balloon, which he had named Marshmallow. His older sister and her friend orchestrated a backyard funeral for Marshmallow, in which they buried the balloon, put a white popsicle-stick cross in the yard, said a prayer, and posted “Here lies Marshmallow. He was a good balloon.”

At dinner that night, my son was still intermittently crying over the balloon. My husband came home from work and gently asked what the tears were for, thinking there had been a serious grief-inducing incident. On hearing about the death of Marshmallow, he laughed and said, “Boy, we don’t cry over popped balloons. Balloons are 99 cents at the store.” My son told him he was mean and he wanted mom, not dad, to read with him that night. My husband said, “Your mom is helping you grieve a balloon. I’m helping you not get your butt kicked on the playground. Who will you thank?”

At the time, I found my husband’s words to be harsh, and I tried to explain the importance of learning to love, learning to grieve and feel emotions, learning to let go. But that night, when it came time to read before bed, my son went to his dad and told him he wanted him to read with him after all.

Another time, my daughter was faced with riding her bike without training wheels for the first time. She hated -- and I mean hated -- the thought or experience of falling, and at five years old, we like to say she felt her emotions passionately. There were tears, “I can’t do its,” attempts at refusal. I would’ve totally succumbed to the fear and drama. I would’ve said we can just learn tomorrow, or the next day, or the next year, if it’s too hard right now.

Her dad went to the store and bought knee pads, elbow pads, and gloves, and came home. And then he said one of the most important things he has taught her: “I know you’re afraid. But today is the day you will face that fear.”

Through the years, I have realized how my own style of parenting would have created much different behavior and traits in my children. Thank God their dad is around. Though I am a strong and independent parent, I have found myself saying “wait until your dad gets home” through the years. I would avoid having them feel unpleasant emotions. I am grateful to have his strength around when I am weak. I am grateful for my own father’s strength through the years, steady as an oak tree.

Fathering is kind of like that. It’s knowing when to say “we don’t cry over balloons” and knowing when to say “I know you’re afraid” and I will be beside you as you face your fear. It’s stepping in to show an adolescent how to behave and, sometimes more importantly, how not to behave. It’s putting boundaries in place for that behavior. It’s protection from life’s inevitable storms. Just knowing that a father or father figure present is the security of knowing someone has your back and will be there if you get into trouble.

But my wish is that every child would have a bull elephant in his or her life. And we can all work to be father figures for children and adolescents and adults, for that matter, who need that guidance. My kids have benefitted so much from their own tribe and have needed every bit of interaction from their dad, uncles, grandfathers, cousins, aunts, grandmothers, and family friends to become who they are.

So thanks to all the fathers and father figures out there. Thanks for being the bull elephant. And no matter what your relationship is to the child, just keep fathering.

Happy Father’s Day to all!

'How many children do you have?': How I deal with questions that don’t have easy answers
Labeled and Loved: A Lifeline for Special Needs Mommas
The Blue Balloon
advertisement

'How many children do you have?': How I deal with questions that don’t have easy answers
Labeled and Loved: A Lifeline for Special Needs Mommas
The Blue Balloon