‘No children allowed’: Parenting in a pandemic is breaking moms

Published by Lindsey Henke on November 21, 2020 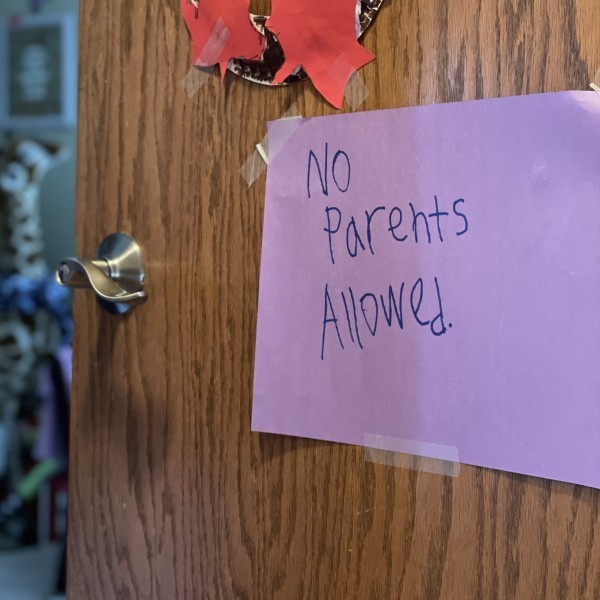 “Mom, look! Watch this!” My four-year-old screams at me as I move around the house trying to put away a month’s worth of unfolded laundry because between working from home, distance learning, daycare at home, and never leaving home, I’m spent. My cup is empty. It doesn’t matter if I put my oxygen mask on first, because there’s no more air left in this crashing plane of parenting in a pandemic.

“Give me a minute!” But my boy with a botched at home haircut won’t. He can’t even give me one second because he’s lonely.

“Mom, look!” he insists. Being deprived of social interaction, beside that of his older sister, for almost a year is wearing on him. He attempted to FaceTime a friend today and became defiant. Refusing to look or talk to his fellow four-year-old buddy on the screen. His sudden obstinance was out of character for him. I assume his reaction was a defense against his sadness over missing his friends since this past spring.

Pushing open the door to their room I disobey the sign written in school age scribble that reads, “No parents allowed,” before stopping to attend to my son. “What is it honey?” I ask as two towers of folded clothes teeter between my arms.

“Watch this!” He holds up a freshly unpacked nutcracker in one hand, plucked from Christmas boxes opened up too soon after Halloween. Having zero ounces of willpower left in me and nothing better to do, I broke my long standing family rule of no green and red decor before Turkey day.

Moving the toy soldier through the air he makes ear-splitting vroom noises and my muscles tighten at the loudness he adds to my already overwhelmed nervous system. Everything about my beautiful boy is loud and has only been made louder by never being able to escape his sounds. Nonstop noise of his talking, vrooming, and banging deafen me. I don’t even get a moment of silence while I sleep because, since quarantine began, he has been crawling into bed with us late at night for comfort from bad dreams, where he snores.

I muster out, “Wow! That’s cool!” as my chin rests atop the pile of clothes between my hands. Acknowledged, my son scurries away while singing, and I’m grateful for his exit.

Attempting to put the children’s clothes away uninterrupted, I hear, “Mom, I’m waiting! What are you doing?” My six-year-old daughter is now in need of something. It seems as if there is never a moment where I’m not required for a task, entertainment, or answers since the virus started its spread. And as the outside temperature drops and COVID infections rise, our family becomes more and more isolated from others, leaving only my husband and I to attend to our children's many wants and needs.

I reply to my daughter with a typical sarcastic mom saying, “What does it look like I’m doing?” But nothing is typical or satirical about the last year.

“When are you going to be done? I want to decorate the Christmas tree.”

“Give me a minute,” I say gently, because I feel badly for her. She’s had to give up so much because of COVID. Her birthday party was scheduled for the weekend the world shut down, and since that initial sacrifice back in March she has been forced to give up sleepovers, school, sports, and friends. Though she can’t comprehend how lucky she really is that the virus hasn’t yet made her give up more.

“One. Two. Three,” she starts counting to sixty. Only willing to give me a literal minute. A thumping starts to beat against my forehead in time with each number she recites. Is this tension over my brow just stress or is it a symptom suggesting I’ve contracted COVID?

I close the dresser drawer and feel my forehead for heat that thankfully is not there before focusing my attention on my daughter with her arms crossed in frustration. “Please, honey,” I beg, “I need some space. I’ll come get you when I’m done.”

Ignoring my request she stays seated on the bottom bunk and watches me as I collapse onto the floor next to the remaining laundry. Feeling beaten down and trapped, I sprawl out on the carpet when I hear my son’s incessant humming coming from the next room. I rub both palms against the backs of my eyelids for a moment of relief.

My head continues to pound as I ponder what this pandemic is doing to our children. Their only access to the outside world has been through the internet and news stations that my husband and I watch sparingly to keep up on the never ending cycle of breaking stories. Will the civil unrest on the streets of our country, the killing of black bodies by police officers in our neighboring suburb of Minneapolis, and the quarantining, social distancing and death they see streaming through our devices scar them? Will some mark of these traumas linger into their adulthood, like how my grandparents who were born into the Great Depression and lived through WWII still washed and saved used tinfoil decades later?

I poke at the place on my face that feels as thick as a rubber tire stretched over my jaw joint and listen to my children start to argue. Realizing that my daughter must have left her post perched over me when I decided to lay defeated on her bedroom floor.

Letting the bickering in the other room build, I consider what the pandemic is doing to us as parents. I haven’t left my kids side in nine months. I sometimes forget words or what I was doing. My mind goes blank from their constant interruptions. My body is exhausted from attempting to attend to their never ending needs while trying to still work from home. I haven’t felt this kind of tiredness since my son was a newborn and only slept for forty-five minutes stretches each night. Opening my eyes, I stare at the popcorn ceiling. I don’t think parenting is supposed to be this intense. My right eye twitches. Or this stressful.

“No! I had it first!” I hear their argument escalate.

Reluctantly, I pull myself up off the floor. Walking into the living room I look past my red-faced and screaming children to see that the organized and clean room from fifteen minutes ago is now, like our country, in a state of disaster. Puzzle pieces are strewn across the width of the carpeted room. Legos lay scattered next to soggy cheerios. Blankets stretch over couch cushions pulled out and placed into what looks like an attempt at a pillow fort. The room tore apart as if one of the recent gulf hurricanes had blown through.

Surrendering, I turn my back on the chaos. I don’t intervene in my children’s verbal brawl. I don’t consider putting our living room back together. Everything is falling apart inside our home, and I’m tired of trying to keep it together. Which is a reflection, a microcosm of sorts, of the larger world and how we are all tired of trying to keep it together, as everything around us falls apart. Latching the door to my bedroom from the inside, I imagine a scotch taped sign on the other side that reads, “No Children Allowed.” If only it were that easy.

The working mom’s survival guide: Pandemic edition
My son is in the hospital with COVID-19. This is our story.
COVID kids: When disappointment is the new norm
advertisement

The working mom’s survival guide: Pandemic edition
My son is in the hospital with COVID-19. This is our story.
COVID kids: When disappointment is the new norm