My heart aches for the photo we'll never have and the goodbyes we never said.

Published by Team Bfsquared on November 19, 2017 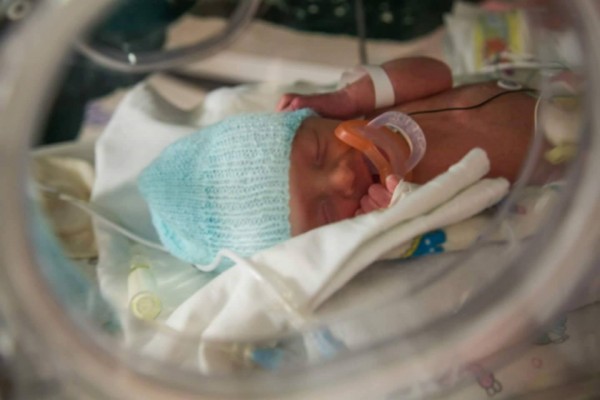 We arrived at the hospital with the clothes on our backs. Surely this was all a bad dream. Even the doctors couldn't believe it was true. Contractions, five minutes apart with no build up? We must be wrong. But one look and our world changed. The doctors started to rush in, each one contradicted the next. We'll stop your labor, we can't stop your labor, we'll give you a shot to speed up lung development, we are going to take our chances. I was 34 weeks and a day. Our son was born seven hours after our arrival into a room full of women and his father. He cried shortly after his birth and the sound filled the room with joy. I was allowed to hold him in the OR and for that, I will be forever grateful. I am one of the lucky NICU parents. I know that now.

But after I was settled into my room and the quiet set in, I realized what I had lost. In the panic of our 4 am race to the hospital, I never got to say goodbye to my daughter. We were not given a chance to acknowledge that life as a family of three had come to an end and a new era was beginning. She was not allowed in the NICU and so we would never have that first family picture everyone posts on social media. The one with the mother looking exhausted and the older child holding the newborn baby while the father looks concerned she'll drop him. Prematurity took that from us and for that, a piece of me will always ache. I have a hard time looking at other people's first day pictures. I think I will always carry that sadness. Unlike the excited me in their pictures, my room was so quiet the day I gave birth. The silence was deafening and such a contrast to the noise of the NICU. It gave me too much time to think, was my sore back the day before contractions? Why had this happened? What did I do wrong?

In the end, we have different pictures from our experience. We have pictures that marked his milestones every day. We have a picture of the first day he was stable enough to wear clothes and one where I have him snuggled under my shirt. And we have a picture of his nurse feeding him a 10 cc bottle that is half the size of his body. When we look at that picture today, we laugh. He is a big child now and thankfully we don't see traces of his early start. It's hard to believe he was once that little. We don't know why he came early and never will. But we are grateful for how strong he was and how lucky we were in comparison to the many other NICU families we know. But, in the quiet moments, sometimes, I still wish that in my frantic dash, I had kissed my daughter goodbye before I left that morning. That I had closed out one experience before starting a new one. It is just one missing piece of a puzzle, I thought would be completed when we became pregnant with our son. But as every preemie parent knows, no matter how much joy we experience, we will always have regrets.

My Preemie Baby
My Preemie Story
Hunter, One Ounce at a Time
advertisement

My Preemie Baby
My Preemie Story
Hunter, One Ounce at a Time