My Daughter Taught Me That I'm Beautiful

I never thought I was pretty. Growing up as a tomboy and being six inches taller than the boys in my class during grade school made me feel like the ugly duckling that was never intended to be a swan. In fourth grade, I was two inches shorter than my current height of 5'6” with a nose that my face had yet to grow into. I just wasn’t what one would consider your all-American beauty girl.

When freshman year of high school rolled around, I found myself learning how to be “pretty.” Flare jeans and baggy tees of my 90's middle school youth gave way to skirts and makeup as my tomboyish figure shed and my young womanly hourglass-shaped physique appeared. Even when the teenage boys began flirting with me and commenting on what I was told was an appealing body, my face was just “okay” in comparison with the prettier girls in my circle of friends. I was known as the funny girl during my younger years, not the pretty one everyone wanted to date. 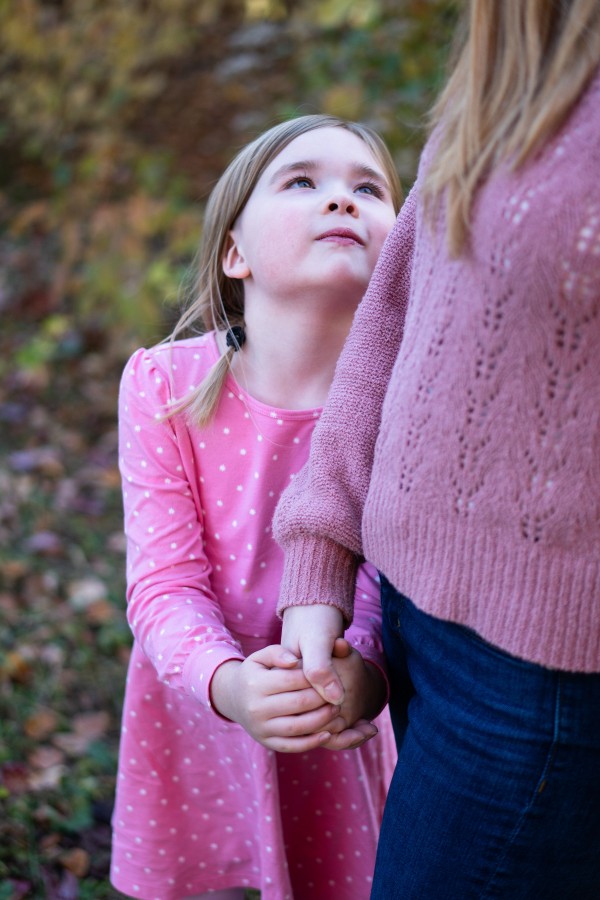 Through my twenties, I saw myself as mildly attractive, because it was often my youth, cerebral nature, and playful personality that usually drew in the compliments and dates, not my stunning beauty. As my thirties drew near, a man with boyish good looks that only got better with age agreed to marry me. Needless to say, I got lucky in that department. But, even with landing a great catch like him, I've never considered myself beautiful. Not until she came along.

“She” being my daughter, who to my chagrin looks just like me. During my pregnancy with her, I hoped she would look more like her father than me, when in actuality she turned out to be my mini-me. I mean, she is my spitting image. Our baby pictures are practically the same.

It's not what I had dreamed for her, because I know what is ahead. Years of feeling awkward and less than others in the physical attractiveness game. A youth of being teased about her appearance and hours of seeking reassurance from friends and her mother that she is at least “okay” looking. That's what I remember it being like for me. I hope it won't be like that for her.

Lately, however, there has been a shift in the way I see myself in the mirror each morning, and I believe it's all due to her. Yes, the physical demands of her pregnancy have imprinted not so pretty marks and scars on my body, and the stress of sleepless nights and demanding days that come with caring for a child has left me weary. But, even as I have slowly noticed the flawless skin of the child-free days of my twenties turn into wrinkles from parenting worries in my thirties, I have begun to see my beauty and not just within but on the outside too.

The marks of motherhood, both the seen and unseen, have carved beauty into my body that I had never noticed before, not until she arrived. There is something in her sparkling eyes and pale round face that I recognize in my own. I remember bringing her home from the hospital and being able to see the universe in her deep baby-blue eyes and just be in awe of all she was and is.

Now her youthful face that replicates mine has shown me for the first time in over thirty years that I too had always been as beautiful as she is today. Her strawberry blond hair sparkles in the sunlight while her green eyes, like mine, twinkle when she smiles. The crinkled-style ears we share make her unique in nature, while her light skin brings out her rosy cheeks that I so often use foundation to cover up on my own. Seeing my features in her helped me see the beauty on the inside and outside of me.

Maybe it's not our resemblance alone that has taught me to love my own looks, but it is the way that she unconditionally loves me. She sees no flaws in my physique. As a toddler, she saw my long fine hair, that I used to tickle her cheeks, entrancing and my big nose that I nozzled to hers as playful and cute. She doesn't judge my appearance, even now at age six, where she looks to me to see if I too find myself as beautiful as she finds me. Each day I choose to give her the same respect by not criticizing or critiquing my own body anymore because she does look so much like me and she looks to my lead on how to see her own body.

In order for her to bypass those years of questioning her beauty as I did, I need to embrace my own. Now I believe I can do that because of her beauty, both what’s on the inside and out, because she has shown me mine.

My Daughter Taught Me That I Am Beautiful
This Is Why Getting Older Is Worth Every Ache, Wrinkle, And Chin Hair
Dear daughter: I pray you always see the beauty in your reflection
advertisement

My Daughter Taught Me That I Am Beautiful
This Is Why Getting Older Is Worth Every Ache, Wrinkle, And Chin Hair
Dear daughter: I pray you always see the beauty in your reflection