My daughter licked the walls of the Subway...time to lighten up in the New Year

I remember when I first had my daughter...everything was a big deal. She has a cough. Her fever is high. She dropped her paci on the floor and put it back in her mouth. She has a little attitude. And while all of those things were true, were they really that big of a deal?

I was on the subway a few weeks ago and now that she is almost two, I like to think of myself as a laid back cool mom. Until that day. That Tuesday on the Subway when she screamed the entire time, took a bottle of water from a passenger AND DRANK FROM IT and then proceeded to lick the side and hand railing OF THE freakin' SUBWAY. For someone who used to freak out because she ate a goldfish off the floor, this was a lot for me. It was after that incident-the subway incident of 2015- that I realized...does any of it matter that much?

Sure I try to teach her the proper way to act in public and that she should wash her hands before she eats and be kind and share her toys. But at the end of the day- she is a toddler. She is going to throw tantrums and get sick and get fresh. Why am I making myself crazy when it's all part of the process? So moms, this is my resolution...RELAX. Maybe you can do it with me. Grab a chai latte and try to realize that it will all be ok. Promise. Maybe add a little Baileys and go about your day. They will most likely grow into beautiful and kind human beings and licking the subway will be a moment in time. A BAD ONE...but just a moment. 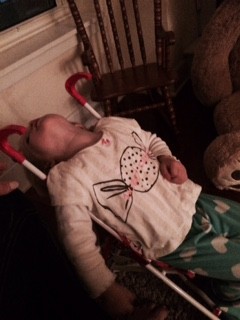 I Laughed, She Cried, and We Both Learned a Lesson
Can I Be Kind When It Counts?
Learning Kindness
advertisement

I Laughed, She Cried, and We Both Learned a Lesson
Can I Be Kind When It Counts?
Learning Kindness