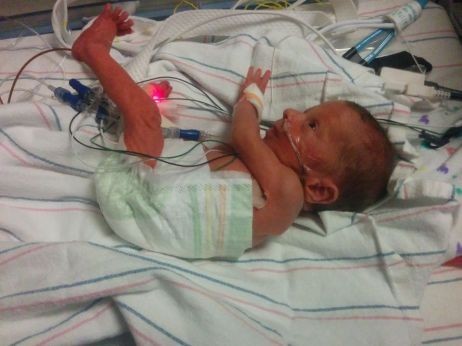 That’s a preemie diaper up to his armpits

If you are anything like me, you have likely read about a kazillion birth stories since the moment you found out you were pregnant for the first time. I have read everything from accidental unassisted homebirths to hospital horror stories. From beautiful water births to straightforward c-sections. I don’t know that I have ready many details about preterm c-sections.

You see, when you have a preemie the birth itself is usually a secondary story. It’s about you, when the real story is about the baby. Truthfully, my c-section was not that much different than a full term surgery, only the outcome carried more uncertainty than normal.

It is freaking cold in here.

“So, you see how there is curvature in the spine? You will want to adjust for that,” the anesthesiologist was standing behind me while she instructed the person actually holding the needle. I have no recollection of what the less-experienced doctor looked like, so I imagine a female Dougie Houser standing on a stack of magazines.

While I support teaching hospitals in theory, I was feeling less charitable as two sets of hands traced my vertebrae looking for the sweet spot on my curved and complicated spine.

I thought about labor with my five-year-old daughter, Lorelei.

After hours of Pitocin-induced contractions I begged for an epidural. As we checked into Labor and Delivery a nurse had looked at my paperwork that declared me a transfer from the local freestanding birth center and said pleasantly, “you probably don’t even need anesthesia to come give you their spiel, right?”

“Oh — no,” I had said breezily, with the air of someone who had never experienced an actual contraction. I was sure that if I should completely fail at childbirth and need an epidural there would be plenty of time for consent forms.

When I finally ruined my child’s sparkly future by requesting an epidural I was in serious, constant pain. They told me it would be about an hour before they could get the epidural going, and I thought, I have no idea how long an hour is. Time has no meaning. But I do know that an hour is not now, and I need drugs now.

The doctor finally arrived and droned on between – and sometimes during – contractions. I was not paying attention, because labor. I have no idea if he noticed any arches in my spine.

Five years later, as I sat on the cold surgical steel table with two women narrating their movements, I could hear nothing but the muffled sound of their voices. My brain had shut down as we entered the bright operating room, flooded with information I was not prepared to process.

I was 31 weeks pregnant and had been in the hospital for more than two weeks with severe Preeclampsia.

The magnesium drips to prevent seizures had set me on fire from the inside and this operating room was putting out that fire with what I assumed was some sort of airborne liquid nitrogen.

My arms hurt from the hatchet job IV placement. After so much time in the hospital my veins were shot. When I blew the most recent IV the evening of the surgery the nurses ended up calling phlebotomy to come help because after multiple sticks they could not get it placed. She found a vein in my right arm and worried it might blow. So she decided to put one in my left arm, too. Wasn’t I the lucky girl?! While digging around to find a vein in my left wrist she hit a nerve and I shrieked and jumped. It felt like a bolt of electricity going into my knuckles, and it would end up hurting for weeks.

I had already signed forms acknowledging the unlikely potential for death or dental injury.

A few minutes earlier a doctor had me open my mouth so she could compare the cavern of my throat to her selection of intubation tubes. I appreciated the attention to detail.

The sides of my vision blurred and dimmed as a seasick feeling overtook my head and stomach. “I think I’m going to pass out,” I said.

A nurse quickly turned, braced herself against me, and helped me breathe. The next half hour is a blur of surgical prep. They washed and shaved me as nurses patted my shoulder. There is a lot of shoulder patting during a c-section.

I was shaking so violently I wondered about their ability to trim my neglected bikini line, even less slice me open with the precision necessary to extract Rowan without injury to either of us.

A surgeon peaked around the drape and smiled, “You’re definitely good and numb. I just poked you hard enough you would have jumped off the table otherwise.”

Various medical staff buzzed around the crowded room, cleaning, shaving, and sterilizing. Occasionally, someone would fill me in on the progress, and let me know what to expect next. It was awkward, having no idea how exposed I was from the waist down, and talking to everyone from a supine position.

“I am hoping we can make a low horizontal incision, but we won’t know until we get in there. With a breech baby of this size, we may have to make a classical incision.”

I nodded, though the surgeon might as well have been an adult from Charlie Brown for the number of her words that actually sunk in at that moment.

The door to the room opened and my husband was escorted in, keeping his eyes focused as far away from my abdomen as possible. Some women have their arms tied down during c-sections, but mine were free to move about the cabin, and my left hand found Zach’s and held on.

I was aware that not everyone in the room was there for me.

There was a team of doctors and nurses from the Intensive Care Nursery standing by — warming table, suction, and resuscitation accouterment at the ready.

It was a strange mix of routine and seriousness in the room. Duke is a major hospital with the highest level NICU, so my 31-week baby was nothing extraordinary. There was not a huge amount of concern in the air, only urgent business.

That’s what a preterm c-section is like — as ordinary as it is terrifying. For me, it was a life-changing moment as we waited to see how much help my son would need to simply be alive and in the world. For the doctors and nurses it was just a day in the office.

I’m not sure I was scared, so much as in utter shock. When you spend two weeks in the hospital, the day everything goes to hell is something of a surprise, even if you knew it had to happen eventually. My brain was absorbing the sights and sounds of the room to deal with later, but in that moment I was not having many complete thoughts. I remember a surgeon discussing the house he was about to buy, and thinking it was probably a good sign. If things were going poorly I guessed they wouldn’t be discussing interest rates.

I feel guilty admitting to this next part, but I was not thinking much about Rowan right then.

I knew he may need to be intubated, and would likely need breathing support of some sort, but I had no reason to believe he would not make it. People always assume I was thinking only of my beautiful baby boy at that moment, but it was such a surreal and out-of-body experience that I could not quite understand that it was actually happening. It felt like a bad dream, and my brain couldn’t grasp it as reality.

The surgeons and nurses continued saying very impressive medical words, and I kept lying there focusing on my body, which felt like it was going to shimmy itself off of the table. More and more warm blankets arrived. My insides felt like ice.

“Whoa! He wanted to make sure we know he’s a boy!” exclaimed the surgeon. These, folks, are the first words ever spoken in the presence of my son, followed quickly by, “he’s having a bowel movement!”

Rowan was not going to be one-upped by his sister on any front. My pregnancy was more difficult, the birth far more traumatic, and now he had pooped inside me. The best Lorelei could muster was peeing on me before they could even get her up to my chest.

They shouted, “He’s here!” over the curtain to me.

I was still not mentally in the room, but I must have understood because my shaking changed to that of adrenaline, relief, and fear. Now my son was here, and I had no idea what was happening.

There was a lot of low talking and commotion on the other side of the room, and I couldn’t decipher it over the sound of my teeth chattering. Nobody sounded panicked, at least.

Words flew at me, though my only firm point in time is 8:51 — the moment he was born. Soon, Zach went over to see him, someone informed me that he was breathing on his own, and I heard shouts of, “Apgars 8 and 9!”

Those are great scores for any baby, but for a 31-week preemie it is fantastic. 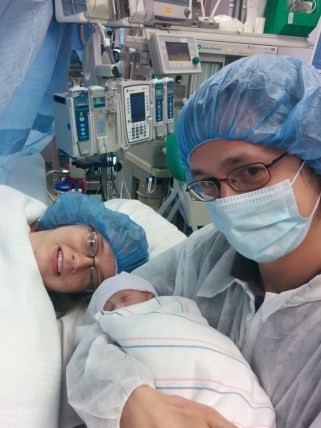 The only thing he lost points on was color, and it really wasn’t a fair quiz. He was hanging out cozy in his uterine home and suddenly someone opened a locked window, yanked him out, and literally scared the crap out of him. He didn’t even have time to study.

Zach took photos on his phone while they stabilized him. Then they wrapped him like a three-pound burrito and carried him to my side. The photo of that moment does not speak to even a fraction of the emotions I was having. I look tired, and nothing more.

I remember thinking he didn’t look that small, really. In retrospect, I realize that was just layers of blankets swaddling him that gave him a bulk he did not have. After a minute they took him away again as they put me back together. I’d put myself back together many times in the coming months.

It may not be the story I wanted, but it’s the story we have.

It would be 24 more hours before I would get to see him again.

It would be nearly six weeks before he came home.

My blood pressure stayed high for close to a year.

His immune system still needs to catch up, and he is sick a lot.

He has a million watt smile, and can throw shade like a boss.