Love One Another: It’s a Simple Commandment. It doesn’t say “love one another only if they’re like you.” 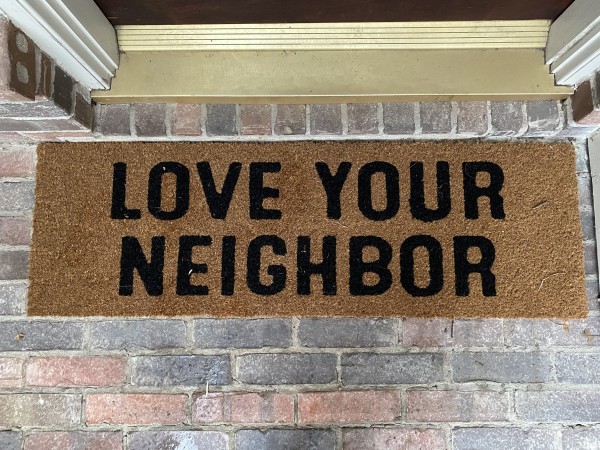 I remember the moment I realized that the teens I was treating had been kicked out of their homes and were living on the streets because they were gay. And I remember the first time I asked a 4-year-old girl if she had a princess party for her birthday and she looked at me and said, “Why would I have a princess party? I’m a boy.”

All of these moments were remarkable because they changed my perspective in so many ways. I remember, in particular, what I learned from them, that we are more alike than different despite the labels we carry.

Before medical school, I lived the first 24 years of my life surrounded by people who were like me. Growing up a preacher’s kid in West Texas, I mostly knew white people and mostly knew Protestants. I did have friends who were Black or Latino at my high school. And maybe someone was Catholic instead of Baptist, but I don’t remember knowing any Jews, Muslims or Hindus.

I would not change anything about my upbringing. It made me who I am today. But over the next 23 years of my life, I have met, looked into the eyes of, and heard the stories of people from all different backgrounds. From them I have learned important lessons about the way I want to treat people, and be treated.

Now — despite the largest humanitarian crisis since World War II occurring across the globe, and despite people just miles from my own home suffering from food insecurity, homelessness, lack of education and access to health care –- transgender children and families have been thrust into the political spotlight. And I think it is wrong.

Decades ago, a mother sought advice for her child who was 5 at the time. This mother, knowing her child was not presenting as a traditional male, wanted him seen by a psychologist. I’ll never forget her words. “I don’t know what’s going on with him, but whatever it is, I want him to feel loved and supported.”

Patients come to me in extremely vulnerable states, with children or teens who are depressed, anxious, bullied, and, sometimes, suicidal.

I ask you to consider these children and their families and what they are going through. Until you have sat with a transgender teen with his head in his hands, sobbing “no one would choose to live like this,“ you cannot fathom what it is like to be him or his parents.

What I have learned is that we really do share a common humanity. We are all confident and insecure, kind and petty, whole and broken. At any given moment, I might feel broken. At any given moment, my children might feel broken. In those moments, I would do anything in my power to help them feel respected and whole again. After all, we all want our kids to find their way to happiness and success.

For the love of God, it’s hard enough to be a parent. Why would we not support each other in the journey, whatever path we are on? Why would anyone choose to vilify children and their parents without regard to their inner turmoil? Why does the presenting gender of another person affect them at all? When children and parents are used as pawns in political games, it is a slippery slope.

My children are not transgender, and there are not people in my family who identify as transgender. But if there were, I would want a safe place for them to seek help and guidance.

I know it’s hard for people to accept things that are foreign to them or difficult to understand. Many of you will never even know a transgender person. But regardless of whether you do or not, I would point to the book of John 13:34. “A new commandment I give to you: that you love one another. Just as I have loved you, you also are to love one another.”

That sounds pretty simple to me.