Published by MrsMuffinTop on June 1, 2015 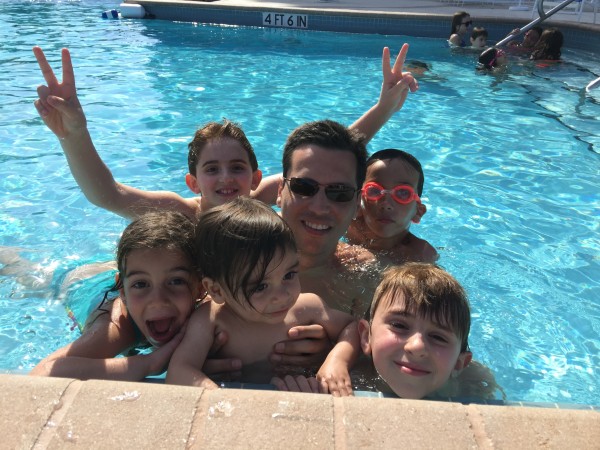 When I was growing up, I always knew I would get married and have kids. My parents got divorced before I hit double digits, so I didn't have a home example of what family was. But, I had watched so many TV shows that my idea of what a husband was seemed a bit...skewed. When I did get married at 29 years old, I realized that even though my new spouse and growing family didn't exactly look like the ones from the sitcoms of the 80's and early 90's, I had really hit the jackpot. Even with my husband's habit of acting like a total baby when he's sick, or leaving dirty laundry around the house for me to find like a scavenger hunt, he's a great guy. And I'm proud to call him the father of my children. Here's why:

1. He supports the kids emotionally. He doesn't judge their hobbies or try to persuade them to do something else. He always encourages them, and doesn't let them give up. He also gives them the courage to push past their self-imposed limitations, which is something so invaluable in a dad!

2. He makes time for them. I know that when I call him to FaceTime with the baby, he'll always answer the phone and make funny faces. He also takes them to practice riding their scooter/bike/throw a ball/whatever they want to do. Sure, a lot of dads do that, and I'm glad that my kids have one that does!

3. He makes them feel safe. Monsters? Not in our house. Separation anxiety? Nope. My husband will go to the kids when they cry at night, just to make them feel safe. Even when they're just joking around and testing to make sure he's still there.

4. He's imaginative. My electrical engineer husband has constantly said that he's not creative. But when bedtime rolls around, he's a story telling master. Dinosaurs that are in space, fighting Darth Vader with a double-sided light saber, because he was contracted by Elsa and Anna on their space-castle, to save the prisoner Olaf? Yep, he told that story. My kids think he's a genius. And so do I.

5. He has so many little moments. My family doesn't need any "big moments" to know that we have a #1 dad/husband in our life. It's the little moments that we love so much that prove to us that he's always going to be there, no matter what. And to me, that's all that matters.

My Husband's Most Important Job: Teaching Our Sons How to Treat Women
The Power of Touch
This Thanksgiving, I'm Thankful Because my Husband is Selfish
advertisement

My Husband's Most Important Job: Teaching Our Sons How to Treat Women
The Power of Touch
This Thanksgiving, I'm Thankful Because my Husband is Selfish