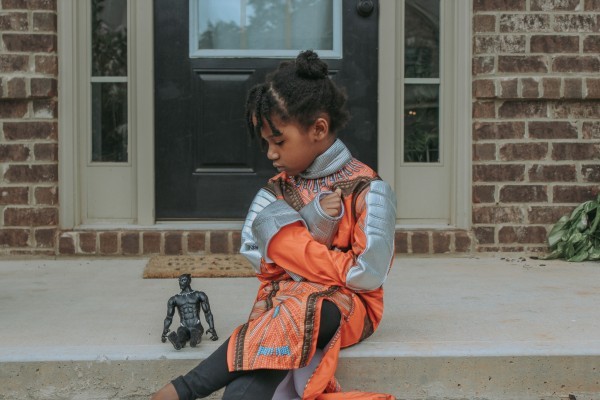 While still fresh, by now we have all heard about the tragic passing of Chadwick Boseman.

At the age of 43, he passed away from Stage IV colon cancer. What is even more shocking for most of us to hear, is that Boseman was diagnosed in 2016 when it had already progressed to Stage III.

Boseman gave us James Brown, Jackie Robinson, King T’challa - not once, but twice after being diagnosed; in addition to countless other films that he starred in over the last four years.

Boseman was not just a superhero on the silver screen, but he was a real-life superhero.

The one we didn’t deserve.

As a 36, almost 37-year-old woman, Iron Man’s death in End Game hit me hard. However, Boseman’s death feels like a real-life portrayal of that to not just myself, but to my children as well.

I have seen many parents posting countless photos of their children in tears upon learning the news of Boseman’s death. Black boys going to bed dressed as Black Panther, little black girls dressed as the Dora, protecting their Black Panther action figures.

For any parent, it is tough to see their children hurting. There are many people who do not believe in crying over the death of a celebrity. So naturally many parents who posted photos of their children were met with backlash.

To anyone who does not understand why any child (or even adult) would be upset overhearing the news that their favorite superhero, and for many of us-their favorite black superhero has passed, keep reading.

Death is natural, but so is grief.

When it comes to death, many of us have a difficult time talking about it. Things become even more difficult when we have to deal with questions about death from our children. Most parents have the best intentions when ignoring or covering up death. They want to protect their children from the pain but consider this: few, if any, human beings are spared the death of a loved one so while parents may think they’re protecting their kids from pain, they may really be teaching them to be emotionally repressed and that their feelings don‘t matter.

Keep in mind that young children learn how to cope with nearly all life circumstances by watching and imitating adults or older children. If the only time a child sees an adult address the issue of grief is during the immediate emotional crisis of death, then the child may learn to be afraid of death based upon the adults. If the subject of death is dodged by adults when they’re confronted with it, then children will only learn to ignore their own feelings and the feelings of others when death affects their lives. This, by ceasing to address the concerns that children have about death, is contributing to their ignorance of the subject.

Parents should talk to their kids about death, just like they talk to them (or should talk to them) about sex and drugs. The point of talking about death with children would be to bring up the subject before a tragic event occurs (if it hasn‘t already) and to prepare them for it, as best one can prepare for what is often unexpected.

Let’s give children the knowledge, skills, and understanding required to live an emotionally secure and healthy life. Let them share their feelings about death and help them identify and express their emotions. They will learn to recognize the various feelings and changes brought about by death and will learn how to adapt to the changes in circumstances.

Tell them the truth about what happened (in a way they can understand, of course) and answer any questions they have. Let them know it’s okay to cry, feel angry, or guilty and help them find healthy ways to express these emotions: draw a picture, write a poem, throw rocks in a pond, etc.

Children who can talk about death outside of an immediate crisis situation will be better prepared to cope with death and its emotional effects, as they will have already learned how to identify and express their feelings.

As a side note, here are a few life lessons from superheroes that my 12-year-old said he and other kids should remember.

Two heads are better than one and even though three might be a crowd, three hundred is an army. In the Avengers, working together is particularly important because each character possesses unique skills and weaknesses and by working together, they don’t just become stronger, they also become less vulnerable. This same lesson applies to the real world. Everybody has different skills, and you never know when one may come in handy. Sometimes it’s not what you know that’s important, but who you know.

Hawkeye may be a slightly weaker character from the outside looking in, but he’s still an extremely valuable member of the team that has saved their skin more than once. Perhaps the best evidence of this is the amount of damage he’s able to do to the Avengers when he falls under Loki’s control, even without any exceptional super-human abilities. Black Widow may seem a little meek next to the other powerhouse Heroes in the Avengers, but her ability to get information from people, or trickster gods, is extremely valuable to the team.

3. Hope for the best, but prepare for the worst.

Tony Stark is constantly upgrading not only his armor but the technology and defenses that impact the entire team. Captain America is comically known for training to stay in tip-top shape physically when he’s not figuring out all the things he’s missed in the last half a decade! Nick Fury’s entire job is staying one step ahead of the bad guys, and Bruce Banner does a pretty good job of making sure he doesn’t become the worst-case scenario that the team is constantly preparing for.

Boseman was a hometown hero for us South Carolinians. He told the stories on the screen of legendary African Americans who may have been flawed but were so important to our history in this country as African Americans.

While he may not have been the first black superhero on screen, he was the one that gave millions of little boys and girls hope. He showed them on screen and off, that hard work, integrity, and passion are not things that they should take for granted. Being a good person can make your light shine brighter than any actions or words ever will.

Chadwick was a hero to my son and my daughters. He collectively rallied black people around the world to see themselves portrayed as something more on-screen than what we were used to seeing.

He is a legend. He is a hero. Rest in Power.

Does your child have a back to school anxiety? Watch him play
How to talk to your kids about death and dying during the pandemic
How To Talk To Your Child About Grief
advertisement

Does your child have a back to school anxiety? Watch him play
How to talk to your kids about death and dying during the pandemic
How To Talk To Your Child About Grief