I Did My Best, But My Son Still Wound Up in the ER 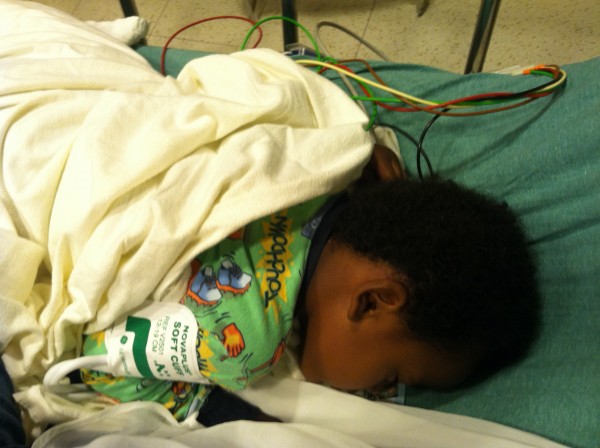 A few years ago I had a one-year old and an almost three-year old. I was busy, chronically sleep deprived, and taking it day by day (sometimes hour by hour.) One July evening it was I was home alone with the kids while my husband, John, was giving the invocation and benediction at an Eagle Scout ceremony for one of our Youth Group teens. I was used to putting both children to bed on my own so it wasn’t a big deal. We started the same routine I had done so many nights before.

I gave my almost three-year old son, Mareto, his two bedtime medications and then settled in on the couch to rock my one-year old daughter, Arsema, while Mareto watched a show. But he was a bit wired this particular evening and while I was rocking and feeding Arsema, Mareto somehow got to his tricycle and began riding it around the house. I glanced at my daughter and saw her droopy eyes - it wasn't bothering her a bit.

So I decided to let him ride around until I got Arsema to sleep. I started getting irritated when I heard Mareto pull a kitchen stool up to the counter. Arsema was almost asleep — I just needed another minute and then I could help Mareto with whatever he needed. I kept rocking her hoping he wouldn’t make too big a mess. The worst I expected was flour spread over the counter or fruit all over the floor. But then I heard an unfamiliar sound.

I stood up, and as I looked into the kitchen my blood ran cold. Rounding the corner I screamed, "noooo!!!" as I found Mareto standing on the stool, head thrown back, chugging a huge bottle of Benadryl. The unfamiliar sound had been the cap hitting the floor.

My eyes were wide with shock and my heart was pounding as I grabbed the bottle from him and found it empty. It had been full - I'd just bought it. Mareto dissolved into tears, feeding off my own fear. I was shaking as I grabbed my phone and searched for the poison control number on the back of the bottle.

The operator was kind and calm (the opposite of me) and asked how much he’d had. “How many mL’s?” Ummmmm. How many mL's are in an entire bottle? I mentioned that he had taken his other meds just 30 minutes earlier. She put it into the computer and said, “Okay you need to take him to the ER now – how far is the closest hospital?” It was ten minutes and she said to run to the car and if I couldn’t get there in exactly ten minutes I needed to call 911. I grabbed my pajama clad kids, the diaper bag, and ran out the front door to find an empty driveway. Oh that’s right. John had the car and the car seats.

I sat down on the front porch and dialed 911 through blurred vision. I hadn't realized I was crying. Mareto played with a stick, totally normal, and Arsema thought it was great fun to be outside when she should be in bed. We went back inside and within five minutes two police cars, two ambulances, and a rescue squad car were clogging up our culdesac. As a dozen different people filled our living room I started answering the same questions over and over and over again to different people in various uniforms.

How much did he drink?

How did he get to it?

What were you doing at the time?

Where is it located?

When did you find him?

What were you doing again?

Where were you when he went to the kitchen?

With each question my already guilt ridden mother heart sank deeper and deeper. This was all my fault. I wasn’t watching him well enough. I didn’t have the medicine secure enough. I could have prevented this. I felt like the worst mother on earth.

The thing is that I really thought I had the medicines secure - they were up on the top shelf of the upper cabinet and they all had child safety tops. It didn't matter, he still got to them quickly and got the cap off easily.

I watched Mareto's face fill with fear as we rode in the back of the ambulance. When they wheeled him through the hospital doors his eyes darted back and forth and his hands clutched at mine. He was terrified. My heart broke as I told myself this was all my fault. All this fear he was experiencing could have been prevented if I had done a better job. This didn’t need to happen.

Inside the ER I had to answer the same questions again to nurses, technicians, and doctors. I apologized over and over and as I allowed shame to wash over me. Mareto passed out about two minutes after ripping off all the wires and such monitoring his vitals. So we re-attached them all while he slept. The nurse came back in and we tried to wake him. We shouted his name, shook his shoulders, sat him upright, pried open his eye lids and shined a light on his pupils. Nothing. He was out. I stared at the monitor and found comfort in the normal vital signs.

We waited for hours to be sure it was safe to go home. I stared at my son and prayed that he wouldn't hold onto the trauma of the evening for too long. For an autistic little boy with an anxiety disorder this was a bit much. I thought back through the minutes before he got into the cabinet and wished I could go back in time. Why didn't I get up as soon as I heard that stool?

As he slept I snuggled in next to his warm body and texted my mom and a few friends. Their responses and encouragement eased my guilt and shame. My friend Lovelyn could tell I was pretty upset and sent me this message:

“So sorry, Lauren. Glad he’s doing well. Hope you aren’t beating yourself up about it — try to give yourself the same grace you would give your best friend who was beating herself up over it. xoxo”

So that’s what I did. I took a deep breath and gave myself a little grace. Because I know I didn’t want his to happen, and I know how fast and smart Mareto is. I know I was trying my best for a peaceful night and could have never guessed he would get into the medicine. I was afraid of judgement and scolding but instead when I shared the experience my mom and my friends shared their own stories of quick kids and "mommy fails."

Maybe instead of "mommy fails" we should just call it real life. Because don't we all have similar stories? My mom had to call poison control when I was a toddler and my brother once ate a grasshopper. My daughter has gotten into my make up more times than I want to count and I watched a baby boy dive head first into the pool while his mom sat right next to him. We're all doing the best that we can but we can't be everywhere all the time. Sometimes things happen and all we can do it try to fix it, learn from it, and do our best again the next day.

A version of this post first appeared on laurencasper.com.