How My Kids Inspired Me to Learn a New Skill 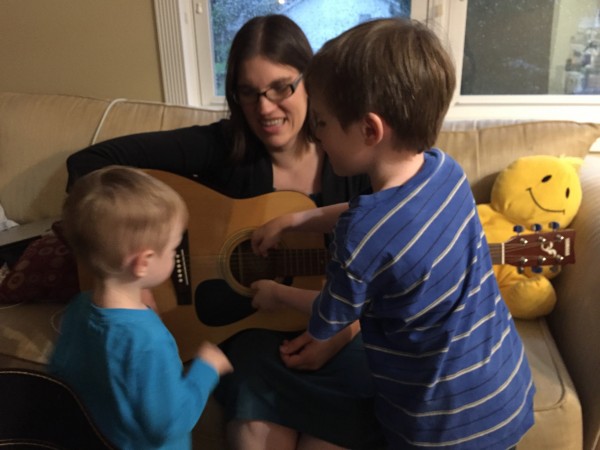 “That is a noise a guitar should never make.” I wince as my five-year-old scratches the strings of my acoustic guitar again. “Seriously, knock it off.”

He switches to strumming. The out-of-tune notes combine together in a way that’s the opposite of harmonic.

“It sounds beautiful!” he proclaims.

My two-year-old squeaks, “Tune!” and grabs the knobs on the top of the guitar’s neck, twisting them wildly. So much for getting it more, rather than less, in tune.

As much as this process pains me, I keep getting the guitar out. Part of it is the fact that my two-year-old now begs for it every day, pretend strumming and pointing to pictures of guitars. It’s a convincing combination of annoying and adorable. Part of it is that I simply love music and love that my children do too. And part of it is the hope that one day that love will motivate me to finally learn how to play the guitar.

My initial foray into playing guitar was motivated by a boy. Unlike most stories involving “a boy,” it wasn’t my (now) husband. Instead, it was my tenth grade boyfriend, who thought he was a badass because he wore a leather jacket and listened to Black Sabbath. Along with buying a Best of Tom Petty tape, I thought learning to play guitar might impress him. I also genuinely wanted to learn - I had played saxophone for five years and thought guitar might be a bit more practical. Unfortunately, a summer’s worth of lessons was not enough for me to sustain my practice routine. It quickly fell by the wayside.

Since then, I always wanted to pick it back up. As a college student, I dreamt of strumming and singing to my future children. I watched my friends playing guitar with longing.

But instead of me learning, it sat in the closet waiting to be played. Until now. Now, there’s a little voice requesting me to get it out every day. While I try to keep my kids from banging on my instrument, I’m trying to figure out chord charts. As I tell my younger son not to stand on the case, I’m stretching my fingers to reach the right strings. As I discuss potential music lessons with my older son, I imagine playing along with him.

I will never be good at guitar. Even after practicing saxophone for years, my innate lack of rhythm doomed me to mediocrity. But with the help of my kids, I may get around to learning the basics. If for no other reason, I’d love to show them that adults can learn new things. I also want to live out the truth that it’s worth trying things just because they’re fun, even if you aren’t actually good at them.

When you have kids, people tell you that you’ll give up so much - hobbies, free time, sleep. And they’re totally right.

But what they don’t tell you is that sometimes that relationship will open up new opportunities that are outside of the traditional bounds of parenthood. Whether it’s because your kids' passion sparks yours or you want to be an example to them, their presence makes things possible that seemed out of reach before. For many women, it’s writing, especially personal essays. For others, it may be learning a new language, learning how to cook, or taking on outdoor adventures.

For me, it looks like it may be learning guitar. That is, as long as I can maintain my patience long enough to actually tune it.