How I Found My Happiness in the Toilet 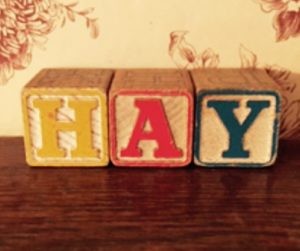 A while back I decided that we'd all had more than enough of this grief and cynicism and sarcasm and pretty much everything else that makes me the charmer that I am, please and thank you very much.

It was time to get happy.

So I started where anyone seeking true inner happiness would start: by shopping. Specifically, kitsch shopping. I wanted to fill my house with visual reminders of this new life goal, and I set out to find the perfect inspirational handmade art. And ended up with baby blocks that spelled out the word "happy". Whatever. Directness is a virtue and I hate shopping and they were cute and there's no worry about a possible copyright violation when and if I needed to write about them.

Anyway, I wanted to see them often and especially when I was in a mental space that left me vulnerable and open to suggestion, so I put them on a shelf directly in front of the toilet. This is perfect for so many reasons, not the least of which is I think placing inspirational art in front of where you go to the bathroom is an upscale European decorating trend I'm coining dung shui. But also I spend a lot of time there, considering (a) my bladder is like a deflated wrinkly walnut thanks to a hundred pregnancies and (b) the bathroom is like the only place in the house where I stand a chance of being able to spend some time apart from these sweet little blessings that are supposed to be making me happy.

Except it didn't really work that way. I found that in actual practice the blocks served as less of a whimsical echo of my new life-zest and more of a snarky, passive-aggressive reminder that said "seriously, it's been months, can we get happy already? I mean, girl, shit or get off the pot!" and then chuckled at its own potty humor in that annoying self-satisfied way of people who laugh at their penny jokes. And while no--of course--the blocks did not have a voice because that would be crazy, if they did it would be somewhere in between Fran Drescher's and my mother's. It was enough to give you (me) performance anxiety.

Then a few weeks ago I went out with my friends to celebrate my birthday. It was one of the lovelier evenings I have ever had, despite some increasingly frantic texts from Nick about something to do with the toilet that I found easy to ignore because there was 90s hip hop on and mom-dancing to do. Thankfully by the time I came home everyone had fallen asleep and there was a sign in front of the bathroom door advising me not to enter, which I assumed was because they were storing my REALLY big birthday presents in there. I was happy to oblige because who doesn't love a good birthday surprise, right?

The next morning I realized that the surprise was shit. And I don't mean that in a "gee, thanks again for the Kenny G Christmas album" kind of way. I mean that there was shit all over the bathroom, running down the walls and pooled on the floor and soaked up by the one and only Pottery Barn towel that we own because the previous owners mistakenly left it here when they moved out.

It seems all those texts the night before about "the toilet" and "WE NEED A PLUMBER FOR REAL LIZ I'M NOT KIDDING STOP IGNORING ME" were not metaphoric declarations of love and were--in fact--actually about the toilet. It was hopelessly clogged.

"What the hell even happened here last night?" I asked, mustering all the righteous indignation someone can who herself spent the night in question singing along to Total Eclipse of the Heart while drinking draft beer.

Nick's answer was only one word long, yet not only did it answer my question, it also answered my 14 follow-up questions that I hadn't thought to ask yet, one of which could have been "who likes to flush random shit down the toilet when no one is looking?"

My mind scanned through all of my valuables, which didn't take long because I don't have any because instead of having money and nice stuff I have children. I looked around the terribleness that was the bathroom and fought the urge to puke, but the reality was there wasn't a lot in there to lose because I don't like clutter unless it is of the motivational variety.

I looked up. There, facing the scene of crime, was one word still spelled out whimsically in baby blocks:

"LUCA," I yelled, and his golden curls peeked innocently around the bathroom door. "Where's the PP?"

"PP GOES IN THE POTTY" he yelled enthusiastically, clapping and echoing the past six months of failed potty training attempts.

I put my head in my hands and stepped out over the defiled towel to call a plumber, who got the toilet working relatively quickly and to his credit did not stare too long at me open-mouthed when I asked if he had been able to retrieve the PP because it had sentimental value. After he left I spent a few hours humming the happy birthday song to myself while cleaning the bathroom walls, and when it was all said and done and I could see my haggard and moderately terrifying reflection in the toilet lid again, I walked over to the three remaining blocks and started to throw them into the garbage. Clearly there was no room for happy in here.

Except... this wasn't happy anymore. This was hay, which sounded just like "hey" when you said it out loud and didn't come out in any harsh voice at all but sounded something more like Ryan Gosling. Like:

"Hay girl, way to (literally) clean the shit out of this place. You're a queen. Come take a load off and claim your throne." Or:

"Hay girl, don't listen to them. I think you smell just fine." Or just:

"Hay," which is maybe the best of all because in my head it's like a gentle children's block fist bump every time I sit down. It's a reminder that sometimes true happiness might feel unattainable-- like when you spend six months of your life that you will never get back sitting in this little room with your youngest, both of you crying because for some reason he can't seem to get that the PP goes in the potty.

When really, he got it all along. Haaaaaay.

I Need the Potty Whisperer
Potty Training: A How to Guide to Failure
To The Mom In The Bathroom Stall Next To Me: Thank You
advertisement

I Need the Potty Whisperer
Potty Training: A How to Guide to Failure
To The Mom In The Bathroom Stall Next To Me: Thank You