How do I get my 5-year-old to STOP YELLING?

He yells when he's happy. He yells when he's sad. But mostly, he yells when he's mad. Apparently he was listening all those times I told him to "use his words," but unfortunately I didn't think to install a volume setting. He's a boisterous kid, and I'm OK with that, but it's the angry yelling that worries me. There's a lot of demanding yelling like "BRING ME A CUP OF WATER NOW!!!"

I always stop and tell him firmly that he's not allowed to talk like that; that's not how you get what you want; and to ask me politely. And he does. But it's not reducing the yelling demands. It's really unpleasant and I don't know how I should react to make it stop. (I've tried just ignoring, by the way, and that just leads to louder and louder yelling. Sigh.) 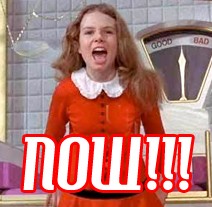 Yeah... this is pretty much the situation. Not good.