Kids, Put Down Your Phones While Dad Texts 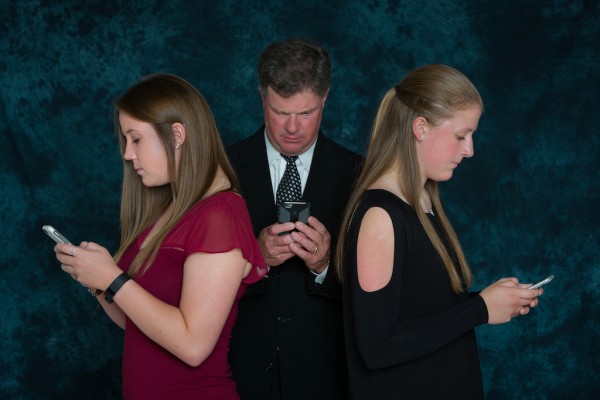 From the day my children became capable of conversing in full, meaningful sentences, I have grown to loathe a simple, four-word response they continue to fire at me whenever I’m conducting a parental teaching moment:

OK, I suppose there are worse four-word phrases for a parent to hear — “I’m eloping to Vegas,” “I got another F” and “I voted for Trump” come to mind — but my daughters never seem to grow tired of “You do it too,” forcing me to justify my own behavior while not condoning theirs.

“GET YOUR ELBOWS OFF THE TABLE!”

“Yes, but I have shoulder inflammation. This is the only way I can eat pain-free.”

“Only when I’m on my way to drop you off somewhere so your mother and I can have some peace.”

When it comes to their technology addictions, I thought I had them cold. Watching my daughters continuously Snapchat, Instagram and selfie their way through their teen years, I find myself regurgitating my disdain for their habit almost daily.

“GET OFF YOUR PHONE! YOU’RE ON THAT THING ALL THE TIME!

“Don’t even go there, missy. There is absolutely no way someone like me spends as much time on my phone as you.”

Kids’ addictions are worse, the study concluded, but not by much.

After reading the findings, I considered emailing Common Sense Media and requesting they live up to their name by gathering all their data in a box and hurling it off the Golden Gate Bridge. Common sense would seem to dictate such a move.

Instead, I can only hope my teen girls never stumble across the study on their cell phones, tablets, laptops or PCs. Doing so would result in the ultimate “you do it too” moment. And, to be honest, I’d have no comeback.

How could I yell at them to turn off the TV when the study concluded someone of my income level and educational background averages more than two and a half hours per day watching that flat screen in the family room? Or the bedroom? Or the basement? OK, perhaps my TV-watching time would decrease if I’d eliminate a few televisions from my house; but that’s another story.

It’s much easier to curse Netflix for its inability to invent a blocking device that prevents me from binge watching more than two episodes of House of Cards and Louie. Are you listening Netflix? On behalf of all parents seeking the upper hand in the technology war with their kids, I’m begging you to atone for my lazy lifestyle.

Ditto for social media usage. Yes, I threaten to bury my girls’ phones in a snowbank when I hear those annoying pings during dinner. But I still spend upward of an hour per day scrolling Twitter, particularly if I want to read who made our president-elect’s ever-escalating poop list.

The Common Sense study concluded 60 minutes of social media usage was about average for someone like myself. Yes, I’ve decreased my Facebook usage post-election; but I’ve discovered that LinkedIn can be wildly entertaining, even for those not currently in the job market. Exactly what IS an Off Platform Mobile Experiences Product Manager and why is the Hearst Corporation so desperately seeking one?

Yes, I’m a poor example. I’ll admit it, particularly now that there is data to back up my confession. I guess I’ll just have to give both girls a taste of their own medicine. I’m already rehearsing the “you do it too” retort when they accuse of me of loudly slamming kitchen cabinets, thus interrupting their slumber.

Better yet, I’ll text them that very response.