Kindergarten stresses me out. I don’t think it is supposed to do that. But as I pull paper after crumpled paper from Lorelei’s bookbag I can feel myself wanting to shove it all under the couch and run far, far away. 100 days projects. Boxtops. A million pieces of school work. Worksheets. Books for her to read. Newsletters. Fliers for programs and meetings and groups. Snack calendars. Fundraisers. -a-thons. Drives. As my brain is trying to prioritize this, it spirals into fear that I did not remember to do that thing. Some thing. I don’t know what thing. But there’s always a thing.

My pre-parenthood M.O. was to avoid the stuff that overwhelmed me. Unfortunately, that usually meant school work. Because math. If I could only handle five tasks, and had ten to do, why would I do the five that sounded like torture? Did I mention I’m a hopeless procrastinator? So, I would put off doing the assignment. And then eventually I would get to the point where it was the most pressing issue on my plate, so I would attempt to write the paper the night before it was due. The problem came when this overwhelmed me to the point that I did a half-assed job and went to bed. The situation had to be extremely dire for stuff I didn’t enjoy to get top priority.

Multitasking is not on my resume.

As an adult and a parent many of the less enjoyable undertakings are requirements to keep my kids alive. I can’t walk away from them, so my brain goes into the red no matter how I order my list. I don’t have decaying Halloween pumpkins on my front stoop (oh how I wish I could end this sentence right there) because I’m lazy. I have decaying Halloween pumpkins on my front stoop because taking them to the worm bin is just one more task breaking that poor camel in half. Also, I think I killed the worms. I don’t hate putting up a Christmas tree because I’m a Grinch. I hate putting up a Christmas tree because taking it down will be another thing to do. Extraneous responsibilities are a burden and a liability. If Lorelei goes to school with tangled hair, you can probably blame Christmas. Or dishes. Or laundry. Or or or.

The background chaos of a full life echos.

Maybe echo isn’t the right word, since that evokes images of empty, cavernous spaces. And the problem is definitely not that my brain is lacking in artifacts and stalactites. Reverberates maybe? I think inside my head looks more like a scene from Hoarders. A thousand cats, boxes of things I probably don’t need, and narrow passages. Mental clutter. It fills those spaces until I can’t get through, until I am pressed between a stack of dishes and a year’s worth of crossword puzzles.

If you get lost, just stay right where you are.

If I move I might start an avalanche; the work that needs doing is a leaning tower of Hell’s Jenga. Better to just leave it alone. I ever so carefully clear away the pile of life-sustaining requirements to get to the open space of things I enjoy. But looming overhead is that spire of responsibility. It leans farther and farther, until I sit with my hands over my head, waiting for the crash. Even the idea of making a to-do list seems like putting the top floor on a falling skyscraper. 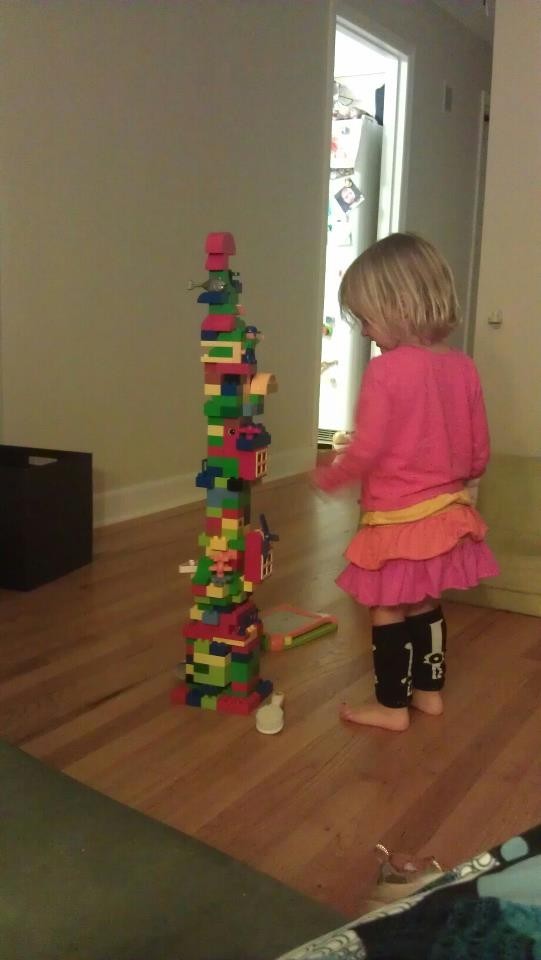 I wonder if I paid the water bill.

What are we going to have for dinner?

This place is a mess. I need to clean.

But, I really wanted to…

When the hell do I get to…?

I think they are still talking.

I see at least ten things that need doing. The dust bunnies and furmbleweeds are taking over. There are toys everywhere. I want to clean, but I can’t clean when my head is so cluttered, and I can’t clear my head when everything’s so chaotic. I want to sell our belongings. All of them. It’s cold outside. I’m trapped.

I wonder if they can see my skin buzzing?

I blink slowly, focusing on the backs of my eyelids. Don’t scream. The silence is deafening, and I can’t hear myself think. I go get in a scalding hot bath and stare at my feet until the vibration in my brain calms. I sink down until my face is underwater, because that requires a deep breath.

We’re going to kick everyone out of this house, and get our sh!t back together. Starting with a to-do list.

“Can we listen to loud music and drink a beer?”

In Defense of Unusual Baby Names
Sometimes fear is a part of bravery: A lesson from my daughter's first day of school
Open Letter to the Lazy Mother in the Grocery Store
advertisement

In Defense of Unusual Baby Names
Sometimes fear is a part of bravery: A lesson from my daughter's first day of school
Open Letter to the Lazy Mother in the Grocery Store