Eveything right down to the cut up onions and added rosemary, just like my dad did growing up. I used to love getting off the bus at 4:00 and see them sitting on the stove with some chicken nuggets and green beans because he knew we'd be hungry teenagers before mom got home on the days he was off from his job as a State Corrections Officer in New York's toughtest prison. 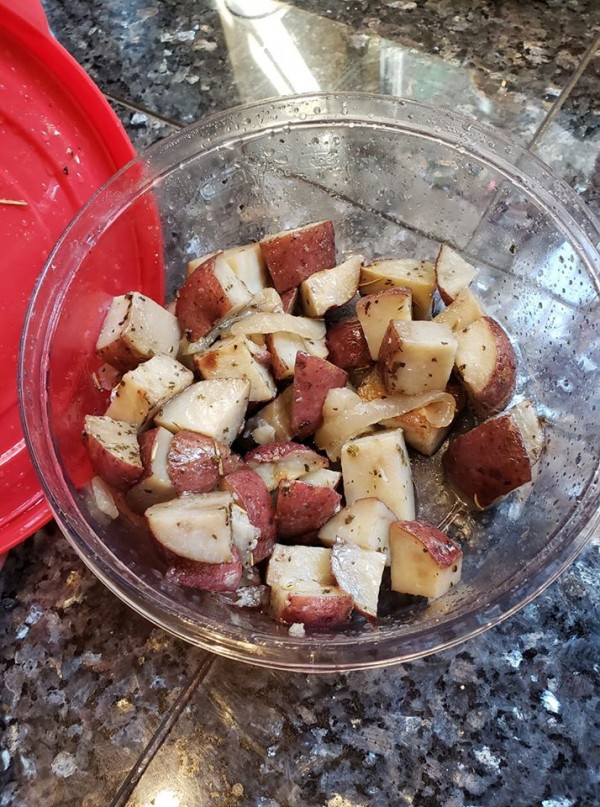 I watch my oldest son and then baby bro as they climb up into the recliner with my husband, settling into his arm nooks. They watch a hunting show as the love of my life rubs the backs of both of my reasons for living. Daddy's boys - so very much like their mama at that age, who'd snuggle up next her own dad to watch an episode of Star Trek while he played with my hair or scratched my back.

He shows them how to do stuff just like my dad.

He points things out to him as he fixes the 4-wheeler, with my smallest son watching him so intently, so eager to learn whatever his father has to show him. Two days later, he does the same thing at my parent's house, out in the garden working with Papa, just like us kids used to do.

He is the man his kids need just like my dad.

He is soft when he needs to be - wiping away tears and giving the best bear hugs. Yet, he is firm when a lesson must be learned that they will appreciate years down the line when they must teach their own children responsibility, character or grace.

He loves me just like my dad loves my mom.

The way we hug in the kitchen each day as our kids watch us with wide eyes and puzzled looks, just like they used to and still do to this day. He texts me silly things throughout the day, reminding me how much he appreciates me, the same way dad left mom notes on the kitchen counter before leaving for work each morning.

I used to think it was weird when people would say a woman seeks qualities in her future husband that remind her of her father. But, here I am on the eve of Father's day weekend, and am reminded of how much he reminds me of him. Not in a weird Freudian way, but in a way that a daughter recognizes the great man her dad is enough to look for some of those attributes in the man she chooses to spend her life with. They are both caring, smart, brave and will both be remembered as the sort of men that could be counted on.

I already see it in my two sons, too. The way the older one blinks rapidly and has the same silly laugh as his Papa. And the little, oh the sun rises and sets with his Papa. They both have so much of him in them because of the influence he had on me.

It's My Dad
Dad, This Is For You
Jenna Bush Hager: I never doubted my dad's love
advertisement

It's My Dad
Dad, This Is For You
Jenna Bush Hager: I never doubted my dad's love