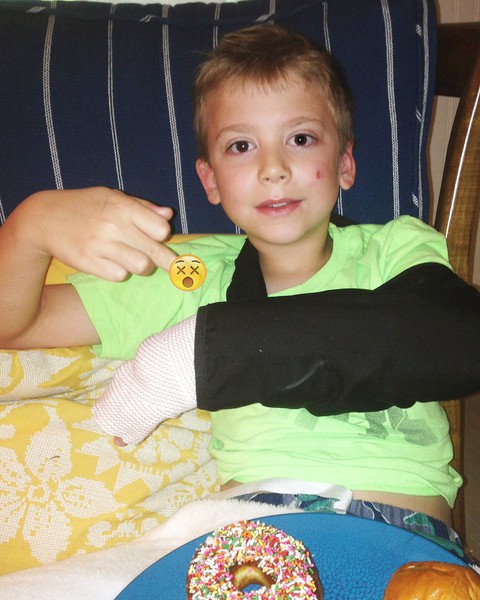 Give the kid a “break,” ya’ll. When you’re a six-year-old trapped inside a ten-year-old’s body, things get a little awkward. For Banks, pointing with the correct "pointer" finger has always been next to impossible. Let's just say it drives my grandmother crazy and she's always threatened to tape his fingers in the correct pointing position as a barbaric form of occupational therapy. But when he broke his arm, those fine motor skill delays made for the perfect photo opt. I’ve been sitting on this little gem for almost two years because it felt highly inappropriate to share, but as I sat down to seriously consider some resolutions for 2016, I knew it was selfish to keep hiding it.

I hate goals. I hate deadlines. And I HATE New Year’s Resolutions the most.

For the record, just because someone goes ninety-to-nothing and takes on a million responsibilities, does not mean they are some kind of type A perfectionist. If you look a little closer, you might just find a hater like me hiding behind that busy facade. But don’t let the the word “hater” fool you, it’s really just a front for frustrated perfectionists. I know you’re out there, haters: you’re thinking about all those resolutions you have for the jolly new year, but you dare not speak or write them down. Voicing your goals makes you accountable (yuck) and writing them down might be tempting, but only if you hide them in a spot you will surely forget.

In 2015, 45% of Americans set New Year’s resolutions, but 92% of them broke their resolutions. You know what this proves? Surprisingly, 55% of the population is smart enough to avoid the resolution trap because there must be some truth in my logic: a resolution can’t be broken if it’s never set.

The validity of these statistics might be arguable, but if so many of us are on to the resolution hoax, why do 45% still bite the bait? I like to think it’s because we’ve yet to discover a viable alternative that will light a fire under our butts and motivate us to get some crap done.

Honestly, the problem isn’t really the resolutions; it’s the crap we feed ourselves when we screw it all up. So instead of setting yourself up for failure in 2016, try a few of these resolution hacks to soften the blow when you fall off the bandwagon:

Just like the clueless kid flashing his middle finger, there is no shame in breaking a resolution. Who says resolutions are for reserved for January first anyway? Or that you have to stick with it for a year? Some progress is always better than no progress, and hey, it’s the thought that counts.

Iron clad contracts ain’t cool when you need an out--neither are resolutions--so choose your words wisely. For example, saying you’re going to lose 25 pounds sounds great, but it’s much smarter to say something more open-ended like: "I’m going to lose weight." Then whether you lose one pound or 50 pounds, you’re golden.

Sharpies are dangerous business when it comes to commitment, so grab a #2 and make your list. If you don’t bear down too hard, no one will ever know when you erase.

But, make your only real resolution not to lose it, actually look at it, and rewrite it often. It’ll be the closest you ever come to keeping those resolutions--guaranteed.

So there you have it, your keys to unprecedented success in 2016! Now, go: drag your feet, make some resolutions, and give ‘em a break. Who gives a flip?

I'm an early childhood education professor and mother-of-two. I'm a potty training junkie with a wild sense of potty humor.

The Best New Year's Resolution Is None At All
Top-Ten Beach Hacks for Beach Haters
If you need me in the next hour, I'll be on the couch -- guilt-free.
advertisement

The Best New Year's Resolution Is None At All
Top-Ten Beach Hacks for Beach Haters
If you need me in the next hour, I'll be on the couch -- guilt-free.