Getting Down to the Nitty-Gritty of Parenting

Published by Damian Rodriguez on January 30, 2018 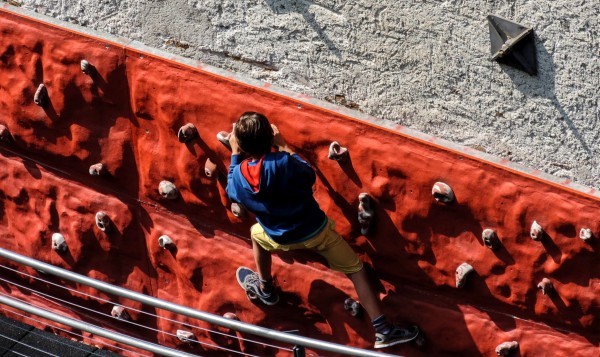 Recently the wife and I decided to go rock climbing. During our courtship, this was one of our favorite activities, but the craziness of two demanding careers, school, and raising two children has resulted in nearly half a decade since we last got out the chalk bags, harnessed up, and ascended a wall. While progressing arthritis made the climbing experience more difficult than I expected, watching my two-year-old son (I’m cool with the judgment. Yes, my boy accompanied us on “date night”) harness his inner Spiderman helped ease the frustration of my declining athletic abilities. Watching him fall (onto a very heavily padded floor, of course) was just icing on this bewildering, amorphous parenting cake.

Falling is good. As every parent ever has said at one time or another: “It builds character.” Or more apropos for the times: It builds a growth mindset or “grit.” These are the concepts right now. This fascinating area of behavioral psychology that is the root of the terms “mindset” and “grit” stems from the research of Carol Dweck and Angela Duckworth, whose quest to identify the characteristics that make people successful has spawned further investigation into leadership development, every area of health science, and you don’t need Superman’s x-ray vision to see the correlation to parenting. We’ve made mistakes, but in our never-ending effort to raise children who are better than we are, many of our recent bedtime chats have been about how we are going to raise “gritty” kids. The Mrs. and I have come up with some basic concepts that are currently in this scientist’s beta-testing phase (don’t hold your breath on a peer-reviewed publication):

1. Let them do it themselves…and let them fail. Being able to pick yourself up after being knocked down is one of the fundamental principles of a growth mindset and “grit.” In fact, in evaluating the hiring, leadership, team-building, and parenting tools that have been developed off the back of Dweck and Duckworth’s research, learning to productively respond to failure is the single most common theme. While I wasn’t going to allow my two-year old son to get halfway up a 40’ climbing wall without a belay, it was very important that I allowed him to fall and that he was made aware that the only response was to get back up. On this day, there was a lot of bouldering, but he got to choose the course of ascension and accept the consequences if his eyes were aimed a little higher than the capabilities of his developing kung-fu grip.

2. “Scaffolding”. If life has taught me anything, it is that the common phrase “Do as I say, not as I do” doesn’t work. It doesn’t work with employees, and it certainly doesn’t work with children. In the oft-repeated words of Gandhi: “Be the change…” Demonstrate how to do something, or at the very least, use words to suggest a strategy. Social modeling has Hulk-like power in influencing those you come in contact with, especially your children. I recently heard a cool parenting term to describe this behavior: scaffolding. Basically, help your children build a solid foundation by modeling the character traits or habits you want them to have and then provide them the freedom to expand on these foundational principles with their own experiences. Provide the framework, then allow them to “build” their abilities and confidence on their own with each successive challenge.

3. Focus on efforts, not results. One of the paradigms of a growth mindset is the belief that one can acquire any ability, given enough time and effort. So, in developing gritty, growth mindset children, the key is to not provide feedback on characteristics they did not develop and that they have little ability to control, but on ones that they can. Give specific positive feedback on action, effort, and perseverance, rather than on primarily inherent traits, like being smart or good-looking. "I see you worked so hard on this." "How did you learn to do that?" Put those statements on your parenting brain speed dial and use them early and often.

4. Challenge them – the “hard thing rule”. Finding the balance between choice and autonomy is one of the greatest challenges in parenting, and Angela Duckworth provided a simple family-wide rule to address this age-old parenting conundrum. The “hard thing rule” has three primary components: every family member has to choose one hard thing to do or accomplish, you have to finish what you start (no exceptions), and nobody gets to choose what someone else’s hard thing is (well, my two-year-old doesn’t get that much say in his). This year daddy is going to collaborate on more peer-reviewed scientific publications (number three is currently in the works), mommy wakes up each morning well before the sun rises so she can keep up with her full academic course load (and full-time job and athletic endeavors) without effecting family time, and our daughter wakes up early to do 30 minutes of yoga each morning before school. Our son...he's getting shockingly good for a two-year old at maintaining a clean room.

5. Establish an expectation. Let your kids know that you expect them to do their best and then create a structure that will help them do it. While their focus should be on action and effort, it is imperative that there be a well-defined line about what is and isn’t acceptable. It’s not productive to tell my daughter that anything less than straight A’s is unacceptable, but she should be well aware that unexplained absences and missing homework assignments are.

6. Confusion, frustration, and plain old boredom are actually good things for your children…sometimes. Yes, they should know that you are always available to help them navigate the learning process, but it is also important that they understand that learning isn’t supposed to be easy. Struggle and even failure is part of the process, and having a difficult time doesn’t mean they’re incapable, it means that they are forcing their perseverance muscles to grow. As for boredom, research has shown that not being provided a constant stream of external sources of sensory activation helps develop divergent thinking skills and that ever-elusive growth mindset. Studying and practicing can be some of the most efficient boredom-inducing activities known to man (and children)—make them do it anyway.

Unfortunately, my son was a remarkably good first-time climber. His toddler hands were a lot more capable on that day than my arthritic digits. Our initial trip to the climbing gym didn’t result in enough falls to force hypertrophy of those mindset muscles, but it’s only a matter of time before life provides ample opportunities for him to be challenged, confused, bored, and to even fail. All in the name of good parenting and self-development…I think.

As a school counselor and a mom, I know what kids need most
Why Gifted Children Fail and How to Prevent It
Perseverance and Grit Can Be Taught
advertisement

As a school counselor and a mom, I know what kids need most
Why Gifted Children Fail and How to Prevent It
Perseverance and Grit Can Be Taught