Frog Belly Rat Bone-- A Monster with a Moral 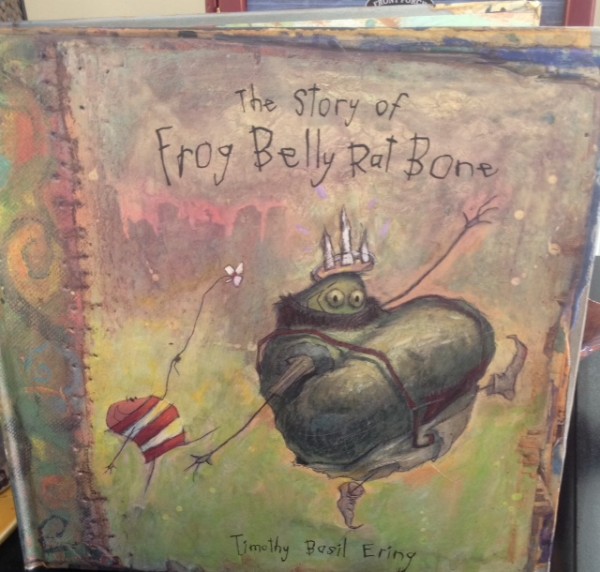 With three boys close in age, reading time was a group event. A loud group event. The task of finding a book that catered to the varying levels of reading ability and interest often proved difficult.

That is until “Frog Belly Rat Bone” entered our lives.

My husband brought home the book, a gift from friends, and I immediately balked at the creepy cover with a dancing, dark monster and odd name. We had clearly left the realm of Dr. Seuss and chirpy, rhyming prose.

And the boys could not have been happier.

This off-beat book, written by Timothy Basil Ering, chronicled the tale of a boy living in the junkyard called Cementland who longed for only one thing…

“This boy had one singular wish: he wished to find treasure.”

And with that line on the first page, my boys were hooked. They squealed in delight as the boy used old, smelly socks, underwear and wire to build a monster that would guard his treasure. He named him Frog Belly Rat Bone; a monster that turned out to be wise indeed.

They were captivated night after night; never tiring of the victorious boy and his able accomplice. Knowing the ending never spoiled the journey. The illustrations were such that you could spy something new with each retelling. They spent hours batting about theories on how to craft a monster out of junk.

Although Frog Belly Rat Bone taught the character about patience when waiting for things you desire, the real lesson for my kids was that reading is a treasure.

They saw that you must be patient, like the boy, until you discover the words that speak to your soul. They learned that books have the ability to bring people together and spark discussion.

It was the only time in those early days when the simple cadence of a story lulled us into a slower place where imagination ruled. A time when tiny hands turned pages, hesitating ever so slightly on the last one, dreading the end of their time in Cementland.

I knew exactly how they felt. I didn’t want my moment with three snuggly boys to end either.

Now that they are in their teens, I hope Ering’s moral of patience, both in the literary realm and life in general, still resonates with my sons. I swear, if I close my eyes, I can still hear them chanting along..

We must be patient