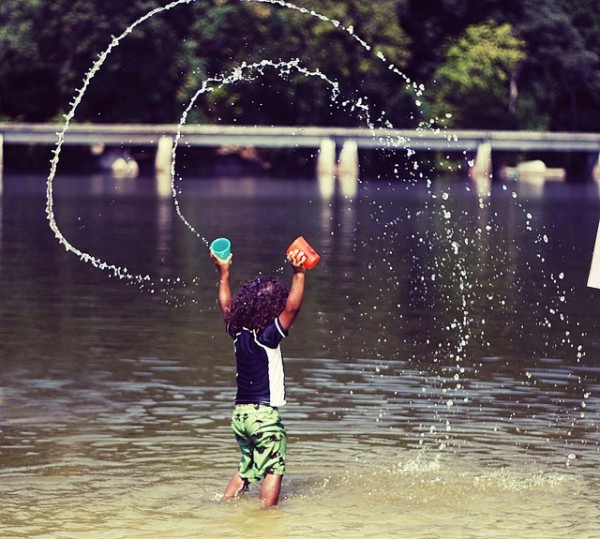 Quirky. That's probably the best word to describe the 7 year old I call my own.

He needs the lights just so in his room to sleep, he has very unique style choices, he can't stand powerful smells or unidentified sounds, he hates being late, he rarely makes mistakes, and his food, it can't touch, because ew.

When he got sick, his quirks sort of became ingrained into his being.

Like all of the kinda cute little things he used to do took over in his mind and became not-so-cute, frustrating tasks he needed to complete.

That’s sort of what OCD is like when you’re little.

You have all of these things your brain is telling you to do and they’re in there, no matter how much you try to ignore them, nudging, insisting, then pounding on your insides to break out. And then they do and you feel better, but kinda worse because OMG DID ANYONE SEE THAT? I REALLY HOPE NO ONE SAW THAT. WHAT IF THEY MAKE FUN OF ME?!

His OCD is exasperated by a tic disorder which means he performs a lot of movements (everything from eye blinks to limping) and/or sounds (he’s done throat clearing and humming) repetitively.

When it’s really overwhelming, he worries more about people noticing.

Because while he likes being different good, he doesn’t want to be different bad. And he knows that people make that distinction.

Recently, he’s gotten better about living with his disorder (I hate that word, because it sounds like a bad thing, and while sometimes it is, it is also just a part of this person I love). He can control it better, he can manage it more effectively, he can accept what it is and that it’s a part of his life. His ability to do this (thanks to his weekly visits to his cognitive behavior therapist this summer and more life changes than you can count on all of your appendages), makes it less pervasive, which in turn makes it again even easier for him to mange.

It’s a vicious and beautiful circle that I wish he wasn’t in, but also love being a part of.

We still have hard months, but we also have amazing ones. Ones where I feel that even as I wish his life were easier, I also love who he has become. Ones where I realize that his different is the kind of different we should all want to be.

He worries more about things other kids don’t even think about, like death, and old age, and the world, and it’s problems. He’s more accepting of things others question. He’s more open with his affection. And he lacks a filter that makes him honest but also endearing.

Me: Oh, so you’re doing that? I didn’t realize it was a school thing too. (He had been wearing them thusly all summer long.)
Dude 3: Yeah, I like it this way.
Me: You know you will get a lot of questions, right?
Dude 3: Maybe, but I think it will be fine.

When he got home, he had his shirt changed –still inside out, but not also backwards…

Me: Oh, you changed?
Dude 3: I got tired of being questioned. Everyone thought I was confused, but really, it was them.

He gets himself, it’s everyone else that can’t keep up.

His difference is both confusing and intriguing to those around him. He has a large personality accented by all of these special quirks that make him interesting and attractive and unique and even cool.

Which brings me to the socks.

They never match and they really never have other than when he was a baby. And for a brief period in kindergarten when I wanted to be in control of something at a time when all of my children were leaving my nest.

He used to actually unfold all of the matching pairs I made and select two non-matching ones. When I realized I didn’t need to bother with folding any longer, he would go into the laundry and just pick any two socks out, no regard for color, shape, or even owner, and put them on his feet. Recently, he’s gotten more intentional –as least one must be tall, patterned or brightly colored are best, and never, ever white, those are boring.

It has become such a thing that other moms have come up to me and thanked me for lightening their laundry load since, now that their sons won’t wear matching socks anymore, they don’t need to worry about folding socks.

You’re welcome. But don’t thank me. It’s all him, totally.

In fact, even I have been baffled by it. So, I asked…

Me: So, what’s the deal with the socks?
Dude 3: They don’t match.
Me: Well, I know that. But why?
Dude 3: Because everything in life doesn’t need to be exactly perfect. It’s ok for things to be different. Because different is interesting and I want an interesting life. Plus, I can never find the matches anyway.

And then I cried.

All of the tears. Pouring from my eyes.

Because I am lucky to have this soul in my life.

I don’t know why he came to me, but I feel afraid and excited and anxious and overjoyed all at once.

I asked him about this too…

Me: I am so happy you chose me for your Mommy.

Dude 3: I didn’t. God sent me because He knew we’d be good together.

Can’t argue with that.

If you want to learn more about the disorder Dude 3 has and how it effects him, this is a pretty comprehensive place to start: Pediatric OCD & Tics

Sharing my super stylish life as a mom of three Dudes.