Published by Stroller In The City on November 8, 2018

Our second day at Disney World was probably our favorite, because we spent it in the Magic Kingdom (see Part I). In preparation for the big day, we had gone to bed early the night prior, and caught the first bus to the park, offered by the Four Seasons Hotel, at 7am. Something I remember from my trips to Disney as a kid were all the lines of people, naturally before fast passes were around and apps to check on wait times. With this in mind, I was determined to arrive at the park early enough to maximize the time in the day. Looking back, I am kind of shocked how many rides we conquered in one day, and I am happy to share my little secret. 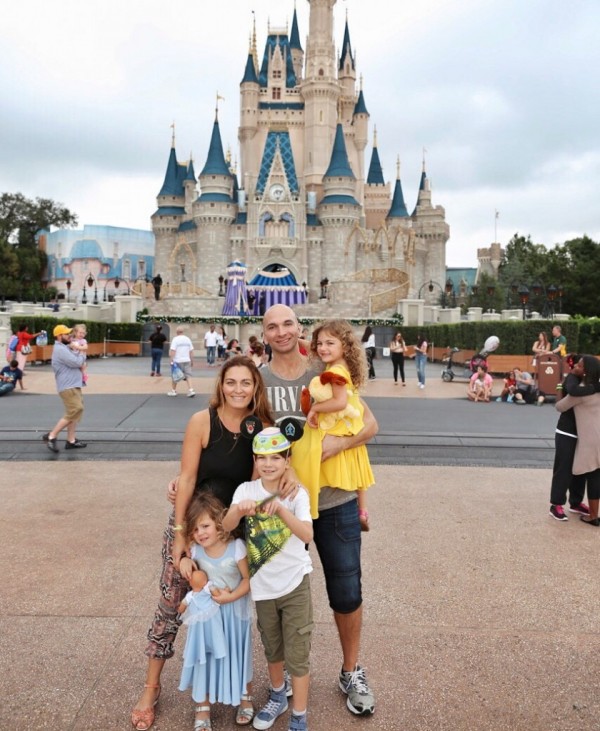 When the bus let out in the parking lot, we were directed to the ferry boat, because the monorail was not running at that time. Even with some rain, the boat ride was an added bonus, because the kids watched as the Magic Castle moved closer and closer to us. To rock their Disney colors, Siella was wearing a Belle dress, and Gemma had on a Cinderella dress, both fabricated by Little Gloriana. To get him in the spirit, Ryder picked out a pair of Toy Story inspired Mickey Mouse ears. 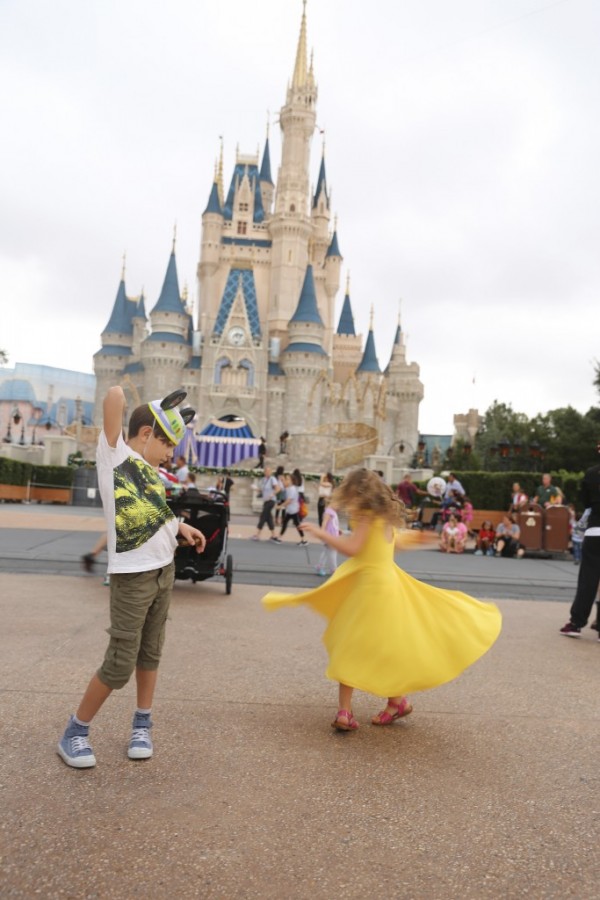 Before booking our trip, I spoke to a few friends who recently enjoyed the Disney Experience, and everyone recommended hiring a tour guide. I had some doubts at first, but I quickly remembered our spring break trip to DisneyLand in California, where we only made it onto 2 or 3 rides. I decided to search around, and chose Magical Tours, a private organization, not affiliated with Disney, to chaperone us for the day. They were surprisingly affordable, and also came highly recommended. Upon booking the guide, we discussed the children’s ages, interests, and rides that were our top priorities. He asked to have access to our My Disney Experience account, which he would access to book Fast Passes, and map out the day. Since he was not a Disney employee, we did not have access to unlimited Fast Passes, but his knowledge of park, and how the crowds moved throughout the property proved to be invaluable. Once our itinerary was locked, we exchanged photos and contact info, to make finding one another easier. We met at the entrance gate at 8:30am, and he showed us the way to the first ride of the day, the Jungle Cruise. With absolutely no line, we quickly hopped on the boat for our fantastic jungle tour. 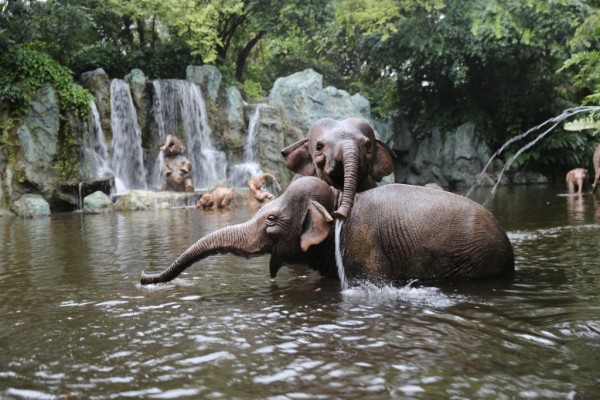 Ok, first ride down, and we were ready for more! Some attractions had height requirements, so they were limited to just Ryder. At this point, our guide suggested that the girls and I ride the Aladdin Magic Carpet ride, while Ryder and Jason hit Splash Mountain. The girls love the ride so much, that we actually went on twice, before walking over to meet Ryder and Jason, who were soaked from their ride! With another big ride, Thunder Mountain, in the lineup, Jason and I traded places. He took the girls to the Splash Mountain playground, while I hit the roller coaster with Ryder.

Next, the five of us used our first Fast Passes on the Peter Pan ride, which left us feeling as if we were flying through the air. We snuck in one more ride on Under The Sea, before heading to our character breakfast, inside Cinderella’s Castle, which the Four Seasons Resort was kind enough to arrange for our family. 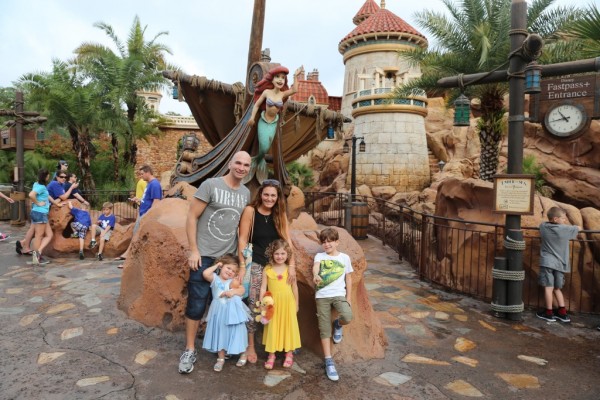 Upon arrival at the castle, we were greeted by Cinderella, where she posed with the girls for some adorable photos. The girls loved getting taking pictures with the princesses as well as getting their autographs, and I think Gemma was especially excited to be wearing a matching dress. During our sit down breakfast, we were joined by all of Cinderella’s friends, including Snow White, Ariel, Princess Jasmine, and Aurora.

After our breakfast ended, it was time to tackle more rides. We met our tour guide David outside, headed over to Tomorrowland Speedway, then used a second Fast Fass for BuzzLight Year, followed by a quick loop on the Tomorrowland People Mover. 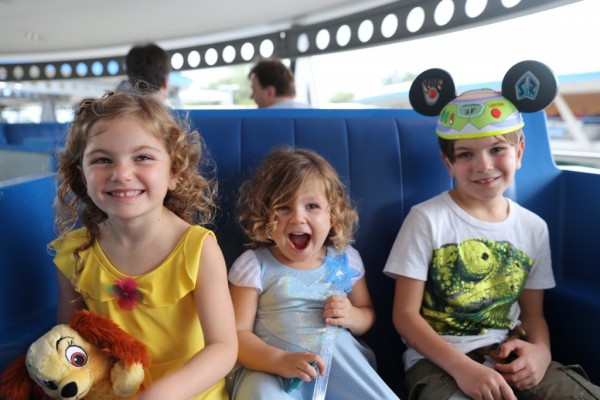 Following those rides, we split our Fast Passes, so the boys went to Space Mountain, while I took the girls on The Barnstormer. Ryder was so impressed with Space Mountain, that he begged Jason to buy him a pin featuring the ride, before they came back to meet us. Following our roller coaster escapades, we rode Alice’s Tea Cup, went into Mickey’s Haunted Mansion, Winnie The Pooh, The Carousel, and ended our afternoon with my absolute favorite, It’s A Small World. 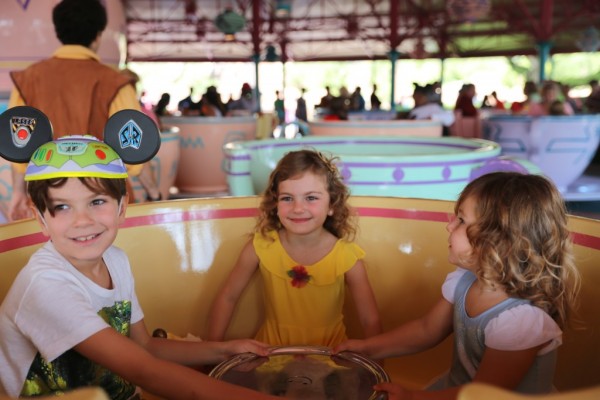 At this point, it was almost 4pm, and the kids were in desperate need of naps, so our next ride was the bus back to the Four Seasons. Fortunately, the buses run roughly every half hour, so we didn’t wait long. The plan was to rest up, eat and make it back to the park, in time for the Electric Parade and fireworks display. 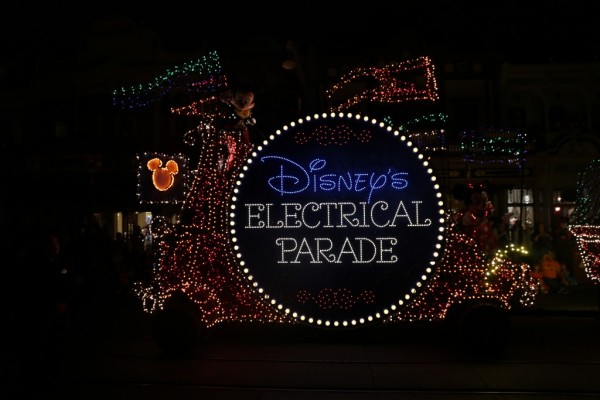 Rather than searching all over the area for a restaurant, we dined in our hotel at Ravello, which is a modern italian restaurant. Naturally, the entire meal was spent talking about all the rides we conquered, and the characters we’d encountered throughout the day. Our waiter got a kick out of their excitement, and shared some stories about when his kids, much older now, first visited to the park.

After our early dinner, we grabbed some sweaters and hopped the bus back to the park. With popcorn and chocolate snacks in hand, we perched ourselves right on the side walk of Main Street for a perfect view of the Electrical Parade, consisting of floats and our favorite Disney characters, adorned in lights.

As if the parade was not enough, we stayed even longer to catch the fireworks, sparkle atop the Magic Castle, now with added magical lights, resembling Elsa’s castle from Frozen. It was definitely a long day for us, but so worth it, and kids still haven’t stopped talking about it!