Due to her birth circumstances

Published by Daniela Botello on November 18, 2017

June 18th, 2015 at night I had some back pain. Didn't think too much of it because up till then my pregnancy had been great! And thought I finally was getting a taste of pregnancy struggles. Well not the case. I woke up at 2am ( as normal throughout my pregnancy) June 19th to go pee. And went back to bed but had to pee again and got up my back was still bothering me though. I went to the bathroom and noticed blood. I freaked out ( this was my first pregnancy) and woke up my bf. He asked if I wanted to go to the ER and I said yes!

As we were changing to head to the ER, I got horrible contractions (thought they were cramps ) to the point I could move or breath. Then, I left as though I had to go number 2 and thought I might be constipated and it was just very bad. Went to the bathroom once I could move and then I had my baby! I screamed bloody murder and her dad delivered her and saved her from going into the toilet. It was roughly 2:26am.

She was born weighing 1lb 11oz and 12 inches long.

My bf then was finally able to dial 911 and get the first responders to us. 7 minutes later they arrived . I had to hold her while he unlocked the door for them. The first responders then helped us and got us to Enloe where we waited to see if she'd be stable enough to be transfer her to Sacramento where the NICU'S were better equipped to help her.

She was in Sutter medical center for 122 days ( 4 months exactly). Had grade 2(3) brain bleed, ROP, heart pda, colostomy , many blood transfusions, constant right lung collapsing and countless infections. We started by taking things an hour at a time till we got to a day at a time. Throughout her stay in the NICU a phrase I heard repeatedly was due to her birth circumstances... her arrival in this world was unique but then again so is she.

But she made it! Left the NICU reconnected, breathing on her own and no issues! The nicu road was tough but she was stronger. One day in the nicu is one day too many. Its hard emotionally, physically and financially. Through all that, I know we are one of the lucky ones because we took home our baby.

Fun fact: she was the first baby moved from the old Sutter hospital to the new one in Sacramento.

Pic of her today vs the second day she was alive. 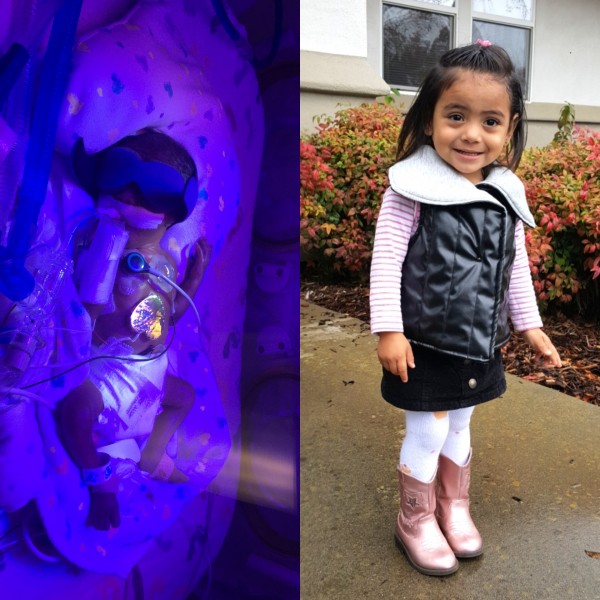 The unknown
Our Journey!
To The Mom With Preeclampsia: It Is Scary, But It's Going To Be OK
advertisement

The unknown
Our Journey!
To The Mom With Preeclampsia: It Is Scary, But It's Going To Be OK