Don't Fight It: Hire The Elf As Seasonal Help

Published by Mother of Serendipity on December 7, 2017

Let's get real, shall we? The few weeks between Thanksgiving and Christmas are stressful. Most of us don't need to add-on by coaching an Elf to be creative.

Not to mention, my kids were the type who would grab our Elf and go long. That first year, our Elf, Donnie, spent a lot of rehab time in the freezer trying to get his magic back. 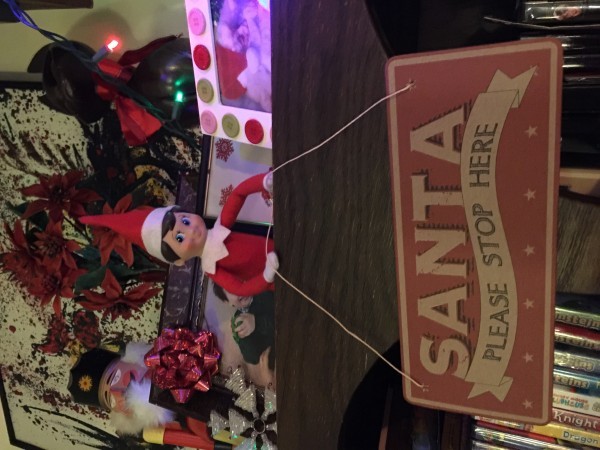 I am not ashamed to admit, it took me a while to sort through my feelings for the little home invaders. Clearly there is a benefit, and it should be fun for the kids, but I didn't want some Elf making my husband and I miserable in the process.

From the start, we told our Elf, Donnie, there would be rules. None of this giving the kids 25 days of gifts nonsense, and we weren't okay with having a "trickster" Elf either. He had a job to do, fine; but he wasn't there to disrupt our house.

Flashback to December 2015: Year 3 with our Elf, and the first year in our new apartment.

It started out like any holiday season, with our Elf Donnie trying to figure out what he could DO beyond leaping from one high perch to another. I'm going to tell you straight, little dude was frustrated, not really enjoying his gig with our clan. So, one night he decided to take some ornaments OFF the Christmas tree and hang them from different pictures on the wall.

Sure, it was borderline trickster behavior, but I thought it was cute. My son, then 5, was thrilled Donnie had done something (anything) original. My daughter, who was just shy of her fourth birthday, was immediately cheesed off.

I know, I was shocked too.

But there she was in the morning, stamping her feet and wagging her finger up at Elf Donnie. She yelled at him for "undoing" the decorations! He was ruining her tree!!

Trying not to laugh at her righteous anger, I suggest maybe Donnie was just trying to have a little fun. I was glad he wanted to decorate in parts of the apartment we hadn't gotten around to sprucing up. She nodded, then returned to lecturing the Elf. In softer tones she told him he could decorate, but he had to get different decorations. He couldn't take them off the tree, or move things around. That was NOT NICE. She loved him, and needed him to be a nice elf.

Later, after my little ones were asleep, I sat in the living room mulling over what decorations still needed to be done. When I caught a glimpse of Donnie's sparkling eyes and impish grin, I knew we had finally gotten in sync.

It's been two years since that night, but it didn't take long for the kids to accept the truth. The Elf on the Shelf might be contracted by Santa, but he REALLY works for ME.

This is the 3rd year I've hired our pal Donnie the Elf as seasonal help, and no questions asked, he's just magical. 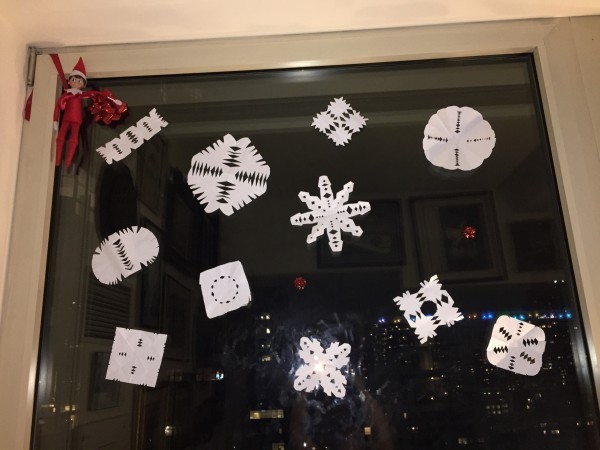 One of the first things Donnie did this year was round up all the kids' paper snowflakes and taped them up on the window with some accent bows. My children were so proud!

Mother of Serendipity
> See my posts
> Visit my blog

As Serendipity I frequently write about the struggle to find the bright side of life and motherhood, while looking out for unexpected treasures, and committing random acts of photography. Just hitting my 40s, I’m a wife and SAHMom of 2 young rebels in my adopted hometown, NYC.

Don't try to keep up — do it your way!
The Elf on the Freakin' Shelf
Keeping Up With Christmas
advertisement

Don't try to keep up — do it your way!
The Elf on the Freakin' Shelf
Keeping Up With Christmas