Don't be afraid to leap... and get your hair wet 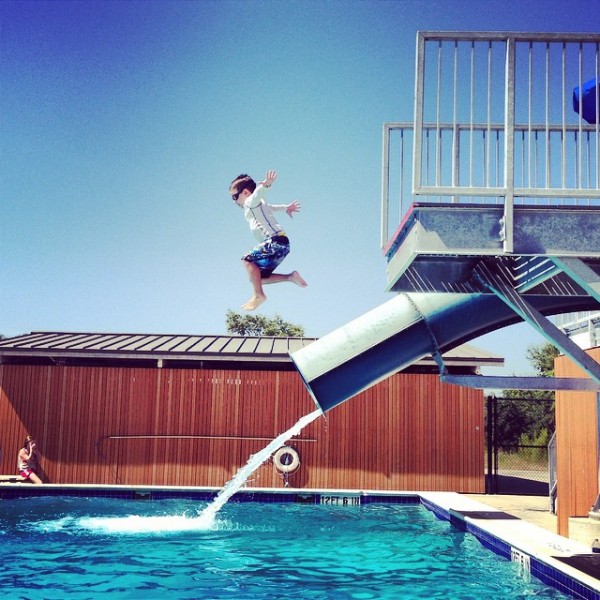 My son, 7, leaps into the water, splashing with joy. He is exuberant and does not care a whit what the thermometer says; it’s pool weather and he’s jumping in.

My nieces, tweens and teens, take their time. Segment by segment, they wade in, allowing their bodies to adjust to the cool water.

“Why don’t you jump in?” my son asks his cousins, quizzically. Why, indeed? He wonders what is taking them so long. The water is perfect and it’s time to play.

“It’s easier to jump in when you’re younger,” one of my nieces replies, with a smile. She’s 11, but already she is more cautious and does not throw herself into the pool with abandon the way she did when she was his age, just a few short years ago.

As I skim the leaves and water bugs from the surface of the pool, I think about the myriad of ways this is true. When I was younger, I would leap headfirst into most things. I thought I was invincible and it was a shock to discover that I wasn’t, sometimes.

I jumped. I often failed. But it didn’t stop me from leaping into other situations without thinking. Sometimes, it worked out; sometimes, it didn’t. As we become adults, we tend to take the road we have traversed before, and taking those risks and not being afraid to dive in without a second thought is not as intuitive. The jobs I took, the rejection I risked, the times I wasn’t afraid to make a mistake are little victories in my life when I look back at them now.

The summer I was 10, a friend was swimming in our above-ground pool and she slipped into the deeper center from the sloped edges. I swam to her, using all my YMCA swim-class knowledge to try and pull her back to the shallow section. She was splashing and panicked, and she nearly took me down with her as adrenaline coursed through her body.

My father was nearby, and to this day I still have a crystal-clear live-action memory in my brain. He leapt over the side, his right leg clearing the white rim of the pool and the rest of him following it into the water. Two strides later, he was there and pulled us to safety, coughing and sputtering and scared. My dad has saved my life more times than I can count, and that’s a whole collection of stories for another time.

Often, getting back on the horse makes the difference that determines where your courage will take you next, like a true-to-life Mad Libs book. As a member of the rowing team, our crew was tight; one year, 18 of us lived in a giant former sorority house and spent all our time cooking and eating food or riding our mountain bikes when we weren’t on the water in our 4- and 8-person shells. We hit the trails hard on our bikes and had a code of honor that if a rider fell during the creek crossing, he or she had to double back and tackle the creek again. On my turn, I fell twice, on the second time crashing so hard I was wobbly and bleeding. My teammates took me back to the van, that time, but I got back on my bike and rode again later that week. I was 19, after all, and not ready to be defeated by a metal frame and some pedals. I jumped back in.

The summer of 2004, I was in the middle of a painful divorce and all I wanted to do was crawl back into bed every night after work. My friends, however, didn’t allow it. “Get up, Kristin,” they’d say on the phone. "We’re going out."

And we did. They didn’t let me stay on the path of wallowing in grief and sadness; they guided me back to the road to life, where I could meet new people and test my injured wings out again. And later that summer, when a certain man indicated his interest without any coy games or pretension, I was ready to step a toe back on the road to loving someone else. Of course, I didn’t know that yet, and I pedaled backward, away from any chance of getting hurt again. When he invited me to visit him in Phoenix that fall, I told my mother I didn’t know if I should.

Mom likes to take credit for nudging me gently toward the man who would become my husband now, the one who cherishes me more than I have ever been cherished and is the father of that little boy we love so much. I’m glad I took a chance on him, despite my fear. Despite my misconceptions about finding love again at my age (a young 33, then!) and whether I deserved his love or any other.

Meredith Walker, the co-founder of Amy Poehler’s Smart Girls organization, has a mantra she uses: “Get your hair wet.” In other words, don’t sit by the side of the pool and stick your little toe in the water. Don’t move so slowly that you can’t enjoy the spontaneity of the moment. And I’m going to push myself to do better at jumping, too. Age is just a number, and I’m not going to let it define how much fun I have.

Get your hair wet.

Go on the Ferris wheel.

Be a little reckless and fearless, the way you were when you were younger.

Celebrate life. This one, right now. Not the one you used to have or sometimes pine for. THIS ONE. 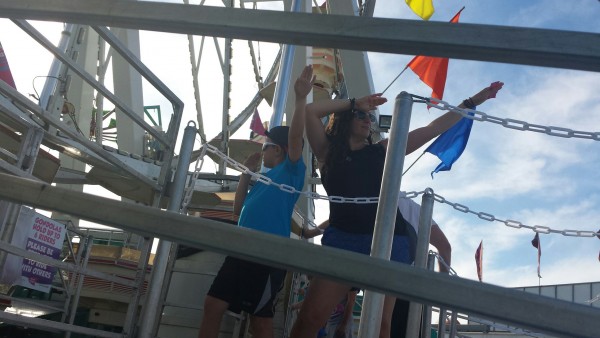 You've Still Got It, Mama
My son drowned, and in my last video of him all I see is a puddle jumper
'Levi's Legacy': My son drowned, here's how I'm turning my anger and grief into action
advertisement

You've Still Got It, Mama
My son drowned, and in my last video of him all I see is a puddle jumper
'Levi's Legacy': My son drowned, here's how I'm turning my anger and grief into action