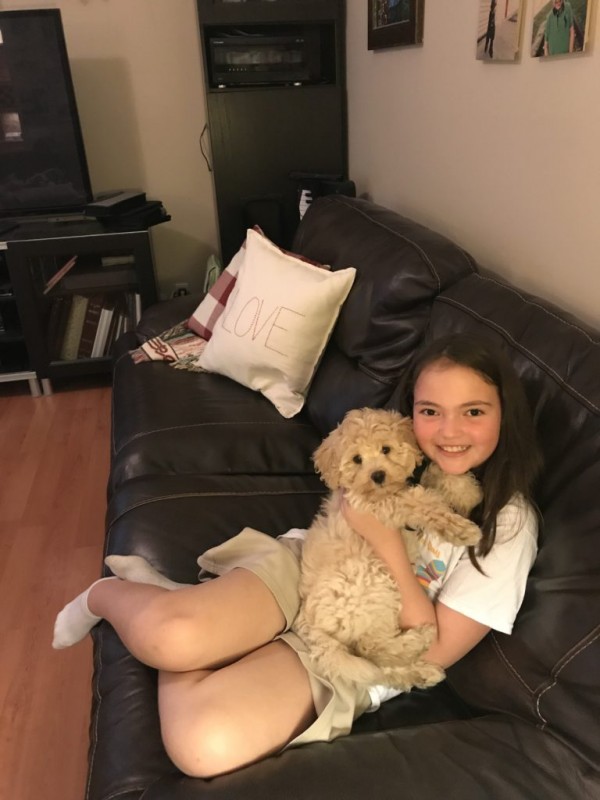 Growing up we always had a dog in my family. They were our family members. Our dogs gave us so much unconditional love. I believe having and loving them helped us to learn a little bit about caring for others, especially those who are most vulnerable. Dog therapy is a good thing for everyone.

I’m the only one in our family of four who has had pets. I know how much hard work they were for my parents. I am aware of all the costs associated with them. As a child, I experienced the heartbreak of losing a few doggie pals. But at the same time, I know how much joy they can bring and the positive impact they can have on a family.

Our daughter is getting older now, and her needs are changing. In some ways it’s gotten a little easier, but in other ways, it’s much harder. Autism is crazy like that. I remember someone liking it to that wacka-mole game at carnivals. Just when you seem to get a handle on one issue, another pops up. Some of the challenges are always there and some of them they may progress past. It just depends on the kid and where they may be on the spectrum. Changes in our children sometimes bring changes in the therapies they need.

Many people look at our daughter and assume she’s not struggling with anything. But aren’t we all? Are all challenges visible? I don’t think so. You may not see a girl that has spent years in ABA and other therapies, who has been able to learn and grow a lot. It took a lot of hard work for her to get to where she is now. Sometimes you can have all of the hard work in the world and it may have little to no effect on a child. I wish I knew why she progressed so much and others don’t. But there is and will always be challenges for her, that’s just par for the course.

Right now, a lot of her needs as far as support goes are social, emotional, sensory, and some behavioral. Also, let’s not forget I have a pre-teen, so need I say more? I’ve taken on the role of primary therapist in our family because, well….it’s just easier than dealing with insurance and paying for new evaluations. I’ve seen how much being around animals like horses has helped our daughter. Dogs are known to be very therapeutic for people with all kind of disabilities. I knew dog therapy was just what she needed. We didn’t need a service dog and we couldn’t afford an actual therapy dog for our child with autism. But I knew that a dog would provide a lot of support for her and everything she’s going through. She needed dog therapy in her life.

Once I got my husband on board for this addition to our family, the search began. I searched for a rescue for several years. We needed one that was at least semi hypoallergenic, so that made things a lot tougher. If you’ve ever looked into adopting, you know how rare it is for one of those kinds of breeds to become available. I would spend hours searching on the internet. After a while, I would get frustrated and give up. It felt like it was never going to happen.

Then last fall, I decided to give my search some effort again. I was hoping there was a rescue center somewhere that I hadn’t heard of. So in a last ditch effort, I called on my facebook friends for recommendations. Lots of people listed places to try, but I still came up empty handed. It was the end of the line. I was pretty much done trying to look for our family dog. If it ever happened, it would basically be a miracle that just presented itself.

And that’s exactly what happened! Never underestimate the power of social media! A friend that hadn’t commented on my post remembered we were looking for a dog. She happen to see another friend post about their daughter wanting to give a dog to someone. The family has a son with autism. They got him a dog and it made a huge difference. As part of his sister’s Bat Mitzvah, she wanted to raise money for another child with autism to have a dog. My friend told them our family had been looking for a dog and suggested us. It looked like a furry family member and dog therapy was in our future!

The rest is history! We met the family and then we took a drive up to Orlando to meet our puppy. Right away I could see the sparkle in my daughter’s eyes and how much joy the excitement of getting a dog was bringing her. I was surprised how she let all the puppies climb all over her. My husband, who was never a dog person, completely fell in love hook, line, and sinker. But the one that actually picked out our puppy was my son. He was a bit shy about it all and when one of the excited puppies came to sit in his lap, that was it. Our Shiloh was chosen!

I picked the name because it is a town in ancient Israel mentioned in the Bible, but it also means “the peaceful one.” If you haven’t read the blog before, I’m big on all the ways I’ve tried to find peace as a mom of a child with autism. I knew this dog would bring us all some much needed stillness, as crazy as that sounds. It was one of the happiest days for our family when we got to pick him up and bring him home.

Shiloh is a mini australian labradoodle and he has the sweetest disposition. He’s still hyper, like most puppies, but he’s able to be chill a lot too. He’s learning so quickly and is very smart. Shiloh is really the best dog we could have asked for!

Shiloh has been such a blessing to our family. Don’t get me wrong, dogs are a lot of work. It’s basically been like having a newborn all over again, but it’s been worth every second. Every time I see my daughter holding him and playing with him, I’m amazed. I was told so many times that dog therapy would help and it’s so true! I remember when she was very nervous around dogs, especially the bigger ones. She hated when they would jump on her. The barking bothers her, but he’s not going to be the world’s best guard dog, so we may be ok there. She has adapted really well to the dog and has really taken to the responsibility of having him. Every day after school she takes him out with her brother, and picks up his business. That’s huge!

The unconditional love this dog has given all of us has been so wonderful. My son has a new little friend that he loves spending time with. It’s a beautiful thing to watch. Our daughter is really doing well and the dog provides a lot of support to her emotionally and socially. If she’s having a tough time, spending some time with Shiloh really helps. A lot of her friends have pets, so it’s been a great conversation piece for her and a way to bridge one little gap socially. And my husband, well, let’s just say he fell the hardest and loves this little guy.

Shiloh coming into our life was truly a little miracle and we are so grateful to the family that helped make our little dream a reality. He has already made such a huge difference in our family life and has had such a positive impact on both of our children. If you don’t have a pet and have a child with autism, I highly recommend looking into it. Dog therapy is a real thing. It really is helping our daughter in so many ways and giving us all a little more peace. That’s something we can never have too much of.

The Peace To My Puzzle Blog 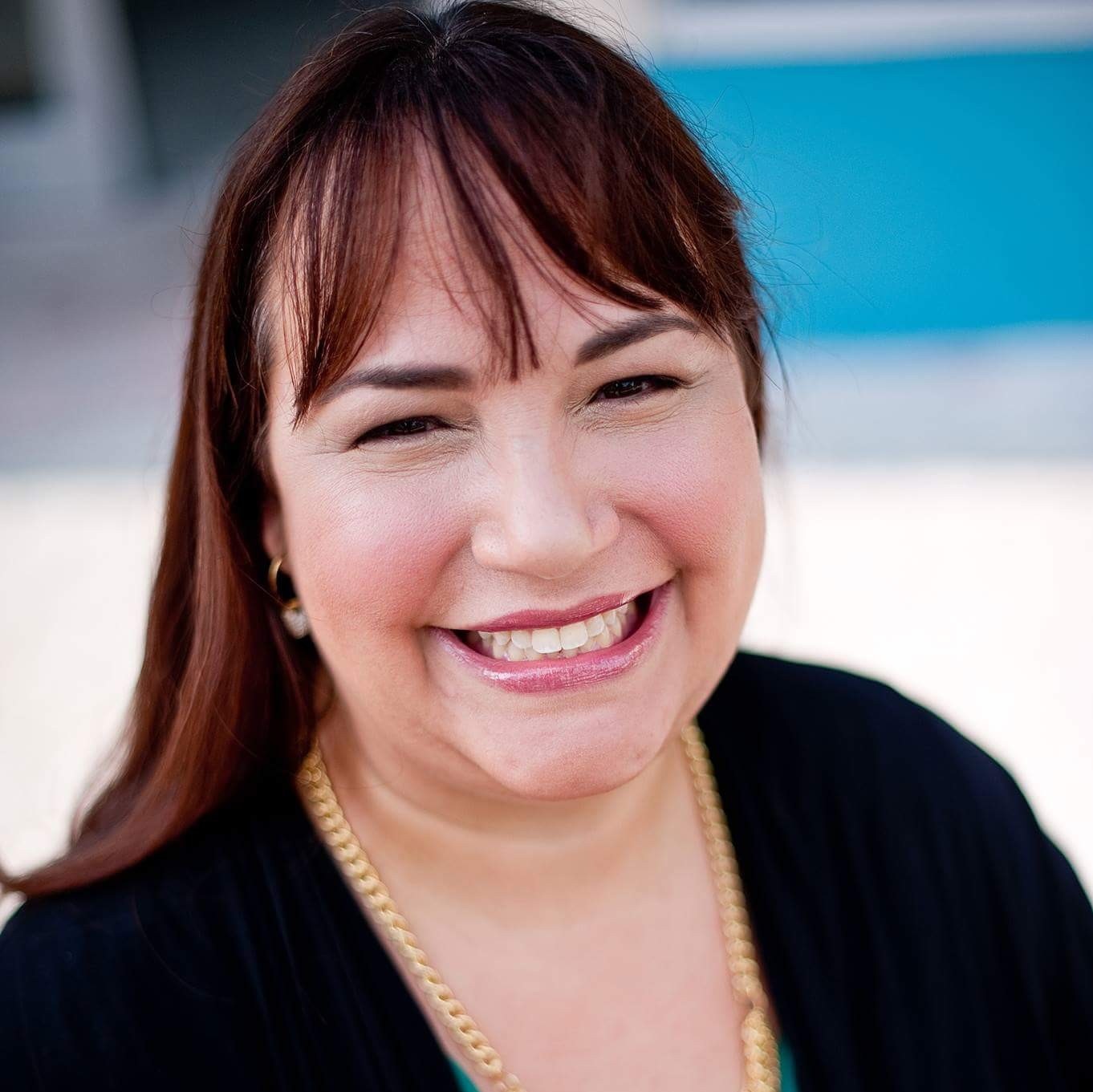 Darlene Giol is a wife and mother of two beautiful children, one who is on the autism spectrum. She currently writes at The Peace to My Puzzle at www.thepeacetomypuzzle.com , where she details her family's journey searching for peace and grace, while advocating for their daughter. She grew up in the Keys and is a Florida native who enjoys copious amounts of coffee, writing, photography, and road tripping throughout the country with her family.

A girl and her rescue therapy dog
We have a new puppy! Welcome to Gracie!
OMG I have a dog!
advertisement

A girl and her rescue therapy dog
We have a new puppy! Welcome to Gracie!
OMG I have a dog!