Yes, I should probably up the weight training at the gym. I know my back will thank me for it now that 2 of my “small” children each weigh over 50 lbs. However, the resistance training I’m referring to is more an act of my will than of lifting more weights.

I’ve come to the realization that trying to thrust an 80 lb bar over my head is a lot easier than the mental resistance training I encounter on a daily basis. For instance, I should resist the urge to shout at my children when they won’t stop fighting with each other. I should also resist the desire to scroll through everyone’s Facebook statuses when I should instead be reading to, or playing with, my children a little more. I should also resist the temptation to beat myself up every time I commit a mommy fail (which is pretty much every day with 4 small kids).

These are some of the more obvious “resistance” exercises that are somewhat easier to recognize and work on, but the one that I discovered is hardest for me is the need to resist the compulsion to overprotect my children.

Let me tell you a story…

Once upon a time in early December I took my kids to this awesome dinosaur park in Winston-Salem. I was happily recording their every move so I could get some “action” shots and, boy, did I get more than I anticipated. My 4-year-old daughter confidently climbed out onto some “leaf steppers” and followed her brother across. But, 3/4 of the way she suddenly stopped and became hesitant as the leaves got higher off the ground. This hesitancy quickly turned into fear and she wanted to quit. I was tempted to tell her to hop down and go do something else like I usually do, but something stopped me. I could see that, though she was scared, she didn’t get down.

She wanted to do it, but was letting her fear paralyze her. I, too, once suffered from a crippling fear of heights but ultimately found the courage to overcome that fear and grew to love the sport of rock climbing and rappelling. If I had never overcome that fear, I would have missed out on so much fun that life had to offer. In fact, I recently read a quote that expresses it so well: “Our fears don’t stop death,…they stop life” (@johnrampton).

So, with this in mind, I told her I would stand right beside her and that I knew she could do it. With a good deal of coaching and a whole lot of patience, my sweet daughter found her courage, climbed to the top of these leaf steppers, and overcame her fear! 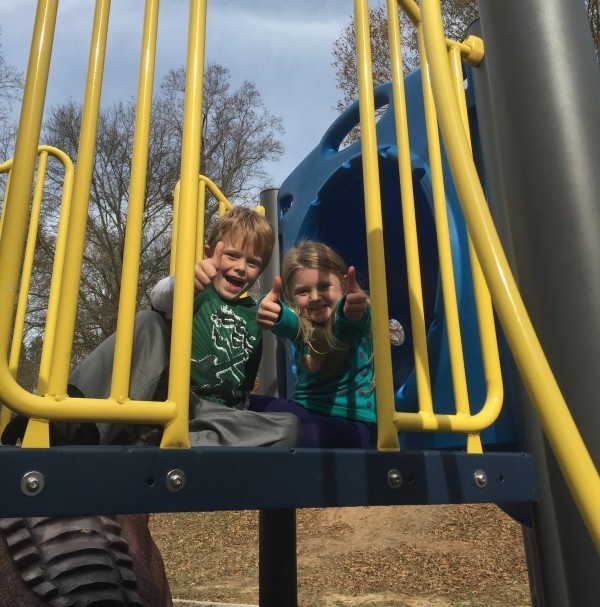 What if I hadn’t resisted the compulsion to step in and prevent her from experiencing this fear? She would not have learned how to overcome it! No parent wants to see their child suffer in any way but I’m starting to realize that if I always overprotect my children then they will ultimately suffer even more. They will miss out on some of life’s great opportunities if I don’t let them work through their fears. They will lack the skills and developmental tools necessary to succeed in life if I don’t allow them to take risks and sometimes fail.

These are such heart wrenching prospects to consider but seeing the smile beaming on my daughter’s face at the end of her struggle made me realize just how important it is to make this mental “resistance training” my New Year’s Resolution.