Published by Stephanie Hartman on November 13, 2017 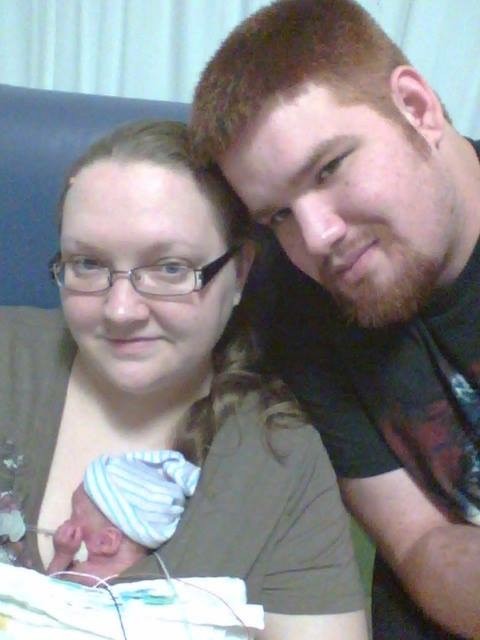 There was a time when I didn’t know you. A time of ignorance, when I didn’t know what went on behind those double doors where your work is done. See, my vision of my child’s first days never involved neonatologists, isolettes, and a weight measured not in pounds and ounces but in grams. You weren’t in those visions, either, so in the beginning you’re a terrifying reminder of how wrong my baby’s birth has gone. It isn’t you I don’t want to accept, though. It’s the crumbling of my hopes and dreams that causes my fear. The unknown and unsure. The almost indescribable moment when reality slides into something you’ve seen in a movie. Accepting you meant it was real; it meant that my ignorance was over. Awakened, I watched you keep vigil over my tiny son…all 540 grams of him…and love him. I would soon begin to understand how badly I needed you.

It felt like an eternity before I got to see my son. Arick would place me carefully into a wheelchair, hang my pain pump on the IV pole and slowly he’d wheel me to the double doors where the tiniest, most fragile patients were housed. In his first day as a father he’d become an expert at the only two things he could control: calling you every 15 minutes to check on Avery and scrubbing in and standing helplessly at his bedside. That first time I set eyes on all of him you soon came to tenderly change his diaper, no bigger than a packet of gum. His little corner was dim but for the single light shining down on him, illuminating your hands as you then worked to take his temperature. I’d never seen anything so delicate as either my son or your hands as you touched him. Your words would bring me the first comfort I’d feel in nearly a day. He was stable and breathing 21% oxygen. It was you who explained to me that night what room oxygen, TPN, the vent, the six IV pumps and all of the other overwhelming things meant. We stayed for a while- I was weak and still very sick- and you were there with us until we left. It wasn’t until I was back in my bed in my own room that I realized your only patient might have been Avery. I was stricken with the thought that you were given the unlucky job of watching, and waiting, to see if he’d survive his first night in this harsh world.

Over the course of Avery’s four month stay I feel that I witnessed the very same thing occur before my eyes with other babies. I saw you, worn, the concern evident on your face. I watched you care for a baby like it was your own knowing that this child’s time might be coming to an end. It was in those moments that I realized how strong you were. How you can face every expectant families worst fears and still go on. You’ve been with families as they say goodbye to their precious child and the next day you’re back knowing you could be doing the same thing. I believe that during those four months I saw the scariest, most heart wrenching aspects of what it means to be a NICU nurse. I probably experienced a great deal of them first hand. But I know in my heart I’m wrong. I can’t imagine what those moments are like. I’m just glad that you were there for those families. I’m just glad you were there for US.

It was you who taught us how to feed our two pound baby. A daunting task, feeding this child was. You wrapped him tightly in two receiving blankets and showed us how to remove him from the isolette safely while attached to so many wires. You showed us how to get him to suck and how important supporting his chin was. You facilitated the very thing that saved him- eating. You knew he liked to sleep on his tummy if you wanted to step a foot from his isolette. There you’d bundle him, long legs tucked under him like a little frog. You taught us how to stimulate him to breathe when he forgot to and showed us how to read the monitors, especially how to recognize the false alarms. When we watched him stop breathing and almost lose his fight you sat with us nearly all night. You were there in the darkest moments, when fear outweighed all other emotions.

Then again, you were there for the good days, too. When he gained weight for the first time you wrote on his board in big bold print, 1 lb (giant 5) oz. We walked in and the first thing we noticed was that enthusiastic note. You took his tiny footprints on his one month birthday and created beautiful keepsakes for us. It was you who celebrated every single hurdle he jumped beside us. You cheered when he successfully transitioned to CPAP after five long weeks on the vent and participated in an epic photo shoot four weeks after that when he finally went onto the nasal cannula. It was you who gave us that knowing smile the first time we walked into level 2 to see our newly minted “feeder and grower.” And it was you, every single one of you, who came to us the night he went home to say goodbye. You told me to dry my tears. You said we’d do fine. I wondered how, why, you had so much faith in us. Now, I know how you knew we’d make it. It was because everything we knew we learned from you.

NICU nurse… You held my baby before I did. You touched his thin red skin long before I could. You took mercy on me and let me hold him for the first time at 6 weeks old, still vented, knowing it was a burdensome task and that he might not tolerate it well. It was the only time I held him until a month later when he could be fed and it was the single most precious moment of my life thus far. You knew our sons cues, his likes and dislikes. Before I knew enough to know him, you already did. Each night we walked out of those doors and left a piece of ourselves there with you. We called at all hours of the night and you never got tired of telling us he was “just chillin’.” You cared for him like I know you would care for your own. Thank you will never suffice.

When I think of Avery’s early days, it is you who stands out because your presence was so strong. You saved our son. YOU were exactly what our family needed.

To the ladies and gentleman at Clear Lake Regional Medical Center NICU: Thank you for doing what only you could do. To the families of sick babies it means the world. It equates to their fears being eased, intimidating medical terms being understood and trust being built. You did all this, and so much more, for my family.

I’m Stephanie, 35, from Southeast Texas. I have two amazing kids, 12 year old Abby and four year old former micro preemie living with cerebral palsy Avery. I write about life a a medical Momma and my own journey with PTSD and anxiety. I love to read, write and love!