Dear Dads, You're killin' it 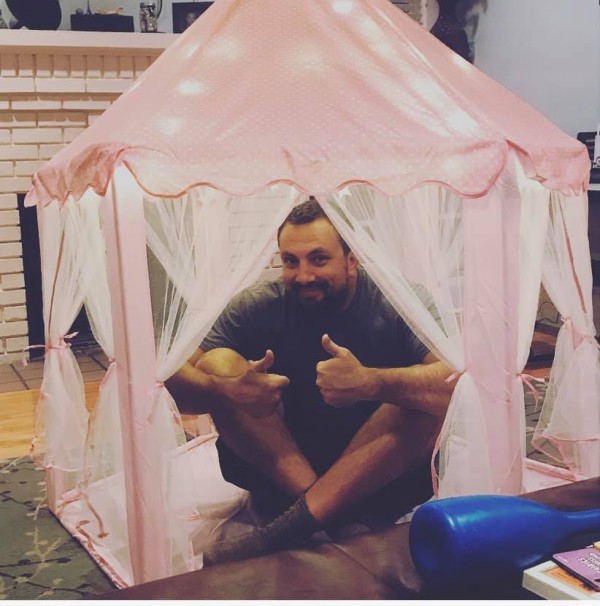 And I think it's time that someone told you.

More than that, I think it's time the world rally around you fellas and shout your praises.

Us, women, who are mothers, are *usually* good at building each other up, but where we often slack is doing the same for our male counterparts.

When it comes to you all, we are quick to

dismiss your hard work (because how could it compare to ours),

assume life is easier for you (it ain't, I know),

and joke at your expense ('cause the marriage and dad memes circulating sure are hilarious).

I want to flip the script, though.

In my own home, for sure, but I'm hoping other gals will do the same.

I know a lot about being a woman and mother in today's world, and it's really freakin' hard.

But I know nothing about being a man and father in today's world other than that it, too, is really freakin' hard.

And you know who does hard well?

(Please get your mind out of the gutter.)

But just because you *typically* wear the heaviness of life and stress better than your wife, doesn't mean you don't feel steadily challenged or that there's no need to applaud you for stepping to plate each and every day.

For the dads who work very long hours, we know you're working hard to support your family, and we see you, and we thank you.

For the dads who stay at home with their kids, we know that 'all day on' shiitake isn't easy, and we see you, and we thank you.

For the dads who are still married, we know your relationship isn't a cakewalk, but you've stuck around regardless, and we see you, and we thank you.

For the dads who are no longer married, but are still present as hell for their children, we see you, and we thank you.

For the dads who love their kids' mama so well, that their children know what being loved in the right way is supposed to look and feel like, we see you, and we thank you.

For the dads who support their kids no matter what, and for the dads whose kids are kind because they model compassion incessantly, we see you, and we thank you.

For the dads who

— however that looks for their family —

we see you, and we thank you.

You see, despite any collective societal social conversation that has made you feel or think otherwise, and despite any of your own fear that you are lacking or failing in some way, you sure as heck are not.

And this, well, it's a continued promise that we, the women of the world, won't fail you and that we will ALWAYS give you the recognition you’ve so rightfully earned and more than deserve.

With love, respect and an immense amount of gratitude,

The Mothers of Your Children

Just as much as a father needs to dine with, talk to, and listen to his daughter, so does her mother...
Mamas: You Need To Date Your Daughters
To All The Dads Who Are Supermen — I See You
advertisement

Just as much as a father needs to dine with, talk to, and listen to his daughter, so does her mother...
Mamas: You Need To Date Your Daughters
To All The Dads Who Are Supermen — I See You