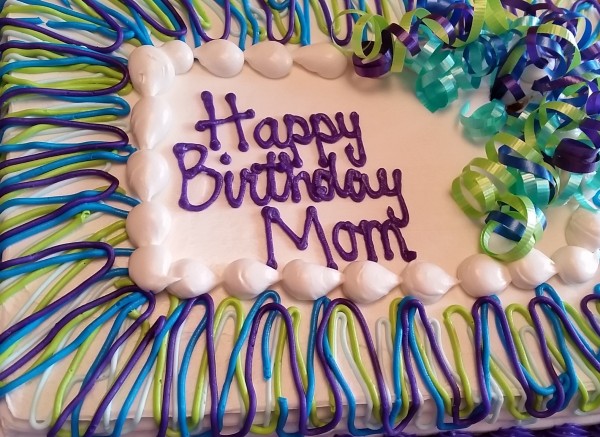 I just had a birthday. I’m not going to tell you the number of that birthday. Let’s just say I turned 29…again…and again…and many times more. Birthdays are certainly fun, but let’s face it – the more you have, often the less likely you are to look forward to them each year.

I was certainly in that camp. That is, until this year. What changed? My son. My son gets so incredibly excited for birthdays – anyone’s birthday – that it’s infectious.

He wants to stand in the card aisle and spend time picking out the card. Now that he’s starting to read, he’s beginning to be thoughtful about picking out the right card. He also wants to help pick out gifts. On the morning of my birthday he immediately wanted me to open his gift ~ a lovely necklace.

My husband told me later how much time our son spent selecting my necklace. He looked up and down, back and forth, round and round the racks, until he settled on just the right one. It puts a smile on my face just thinking about it.

They also spent time picking out a cake. It didn’t take quite as long, though, as our son quickly found the perfect cake. It was purple, my favorite color, and the prettiest birthday cake I’d ever had.

So after I opened cards and gifts, listened to their rendition of “Happy Birthday,” and blew out the candle, it was time to eat cake. My son normally devours cake, but this time he didn’t take one bite. I asked why, and he said he would eat it after dinner.

That night we had his favorite babysitter over to watch him. I told them they could have cake, but when we got home she said he didn’t want any. The next day he refused cake again, twice. The following day he said no again. I asked him what was wrong, and this time I finally received an answer.

“Well Mom, some things are just too beautiful to eat.”

A friend told me after I had my son that he would make me laugh in ways I didn’t know were possible. This was one of those moments – a very tiny, but extremely proud and impressed, little laugh.

Karla Lemmon is the founder of Little Peanut on the Go, a mobile app helping parents stay organized and connected when they or their children are away from home.

A father’s memory has gone but the memories will always remain
My brother gave my young kids a drum set. I waited years for revenge
Why I Choose to Celebrate my Deceased Daughters 3rd Birthday Despite Many Critics
advertisement

A father’s memory has gone but the memories will always remain
My brother gave my young kids a drum set. I waited years for revenge
Why I Choose to Celebrate my Deceased Daughters 3rd Birthday Despite Many Critics