Be at the Race: Lessons in parenting from a 1992 Olympics semi-final race. 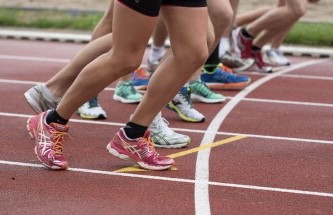 Photo by Snapwire from Pexels

Back in 1992, I was all about me: graduating from high school, toes at the starting block of my own race to adulthood, face lifted toward the future. After 18 years in the town of my birth, my family was moving to Houston.

Because my world was shifting, and because I was 18, I didn’t pay much attention to the news of the day. I don’t remember the Barcelona Olympics that year. And I do not remember hearing the story of Derek Redmond and his 1992 Olympic 400-meter semi-final race.

One evening this week, my husband came into the kitchen to find me wiping tears as I watched a video on my phone. “Oh boy, what now?” he asked, knowing it could be anything: a sappy commercial, a soul-stirring song.

“His dad died,” I told him. “Look, he pulled his hamstring at the Olympics and his dad helped him to the finish line.” Jim Redmond, a man I’d never heard of, died, and here I was crying at the table about it.

Unlike me, my husband was working as a journalist in 1992 and has followed sports and the news his whole life. “You’ve never seen that race before?” he asked. “How have you not seen that before?”

Like I said, I know nothing about this father except the video I’ve seen. But I can imagine that he, like all of us, wanted to see his child fulfill his dreams. How many hours must he have spent driving to track and field events? I know how that feels, and none of my kids are Olympic athletes.

Even so, I have watched my kids pursue a dream. I’ve been there for their successes and I’ve been there when they don’t make the team. I’ve driven hundreds of miles to lessons, recitals, concerts and school events, and I’ve sat in more bleacher seats than I can count.

Because I’m a parent, I can imagine how my heart would break if I saw my child go down on the Olympic track with a torn hamstring in the race of his life. And I can imagine bursting with pride seeing my injured child get up and try to limp to the finish line.

In the video, you can see Jim Redmond, Derek’s father, run out onto the track to his limping son. You can see the grief and love and support as the son allows his father to support him in his arms. You can see the determination on this father’s face when the staff tries to tell him he can’t be on the track and he remains steadfastly by his son’s side and shoos them away.

When you’re a parent watching this video, you feel the father’s pain. When our kids hurt, we hurt. When they’re limping, we are limping. Sometimes it’s a torn hamstring. Sometimes it’s a NICU stay or being left out of a second-grade birthday party. It could be a missed note or a forgotten line in the school play. Sometimes it’s a botched audition or a failed test. Sometimes, all we can do is be present and walk by their side.

On a bigger scale, sometimes our kids are limping with drug or alcohol addiction, mental health deterioration, or a terminal illness. At times they’ll deal with broken relationships or dreams.

Sometimes we see our kids heading down the wrong path and we cannot stop them from taking that path. All we can do is wait at the fork in the road and walk them back home if and when they choose to turn around.

Most importantly, like Derek Redmond’s father, Jim, sometimes we just have to be present at the race. We can’t fix the torn hamstring or the broken dreams, but we can walk beside our kids, broken or whole, on the path. And sometimes, that’s all they need.

He's The Anchor
When the lessons you teach finally come to fruition on a field of sweaty teens
To my kids on Father’s Day: Your dad is not perfect
advertisement

He's The Anchor
When the lessons you teach finally come to fruition on a field of sweaty teens
To my kids on Father’s Day: Your dad is not perfect