Infertile at 26, I Found Motherhood Through Adoption 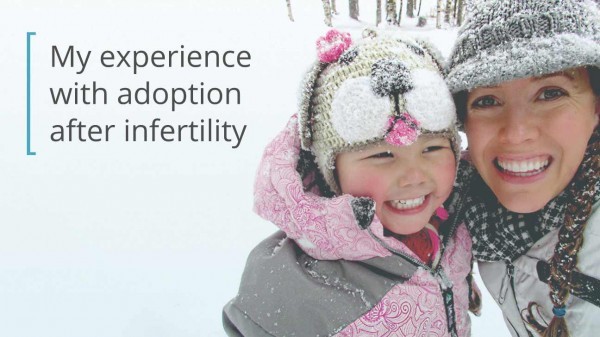 This article was originally published on Healthline.

I was young when I was first told that I’d likely never get pregnant on my own. I was also still single. I’d been under the mistaken impression that I still had plenty of time to settle down and have kids.

And then, my hopes for the future were ripped out from under me. Just like that.

Is adoption after infertility common?

And the assumption that they should can be incredibly painful.

“Why don’t you just adopt?”

“Just adopt.” They are words that every person ever suffering from infertility has heard at least once. The words themselves generally come from well-meaning people, but they discount the loss and the grief that goes hand-in-hand with infertility. They discount a parent’s desire to have a biological child, or at the very least, to have a child as easily as everyone else they’ve ever known.

Many of those men, women, and couples may in fact go on to adopt one day, as I did. But in the height of their grief, it’s rarely the best suggestion to make.

So many people told me to “just adopt,” that I began to bristle against the very idea. It was tossed out as such a simple explanation to such a complicated problem.

It made me feel as though those offering it up didn’t believe me to be justified in my grief. Or perhaps worse, that they saw me as too stupid to have considered this possibility myself.

It took time for me to come around to the idea of adoption. It took me pursuing in vitro fertilization, experiencing failed cycles, and taking a step back to focus on healing from the wound of infertility before I was ready to consider becoming a mother any other way. It was only when I was nearly two years removed from my failed cycles that I was able to truly open my heart to the idea of adoption.

It was only then that I was ready.

Today, I am the proud mother of the most beautiful and amazing 3-year-old. She brings me more joy than I ever could have imagined. Now that she is part of my world, I can’t imagine it any other way.

Still, I do have some advice for those who are now pursuing infertility after adoption. This is based purely on my personal experience, but also seems to ring true for many of the other adoptive mothers I’ve spoken to over the years.

So many people along the way will try to push you toward adoption. You will hear the words every time you have a cycle that fails, every time you experience an unexpected bout of tears, every time another person’s pregnancy announcement breaks you.

“Have you thought about adoption?”

Don’t allow those suggestions to convince you it’s time to turn your back on fertility treatments and pursue adoption before you’re ready. Know that adoption is just another path to parenthood, and one that comes with all its own hurdles and challenges to overcome. There will be waiting lists, certifications, home studies, and a slew of false starts that are overwhelming enough for those who are fully onboard.

If you’re not there yet, if you’re heart isn’t truly open to the idea of adopting, pursuing this path now will only hurt you further.

So wait until you’re ready. Wait until it’s something you want. Not something anyone else is pushing you toward.

The pain of infertility fades, but it never goes away

Adoption isn’t a cure for infertility. It won’t erase the scars left behind by your years of being unable to conceive. It will fill some of the holes in your heart. It also will bring you a joy and love you had started to fear you’d never experience. But it won’t leave you feeling suddenly healed and whole.

There are still some times when my heart clenches. It’s usually when a friend is pregnant and talking to me about what it’s like to grow a human. I have to remind myself I’ll never know that.

There are times when I look at my daughter; she’s so happy and full of life. I fear for the future and how she may one day process her own adoption. I’m sad for the moment when she asks me what it means that her other mommy didn’t keep her. I’m sad for the day when she’ll inevitably shout, “You’re not my real mommy,” in the midst of a teenage fit.

Except, if I could… I would have been the one to carry her. To love her. To nurture her. And to know what it was to grow her beneath my heart.

The yearning for that will never go away.

Leah Campbell is a writer and editor living in Anchorage, Alaska. A single mother by choice after a serendipitous series of events led to the adoption of her daughter, Leah is also author of the book Single Infertile Female and has written extensively on the topics of infertility, adoption, and parenting. You can connect with Leah at her personal website and on Twitter @sifinalaska.

We want to be your most trusted ally in pursuit of health and well-being. How you feel affects every day of your most precious life.

Why Finding A Community During Infertility Is So Important
What Lena Dunham's essay failed to say about the infertility community
Sadness, Joy and Infertility
advertisement

Why Finding A Community During Infertility Is So Important
What Lena Dunham's essay failed to say about the infertility community
Sadness, Joy and Infertility