A Rainbow After the Storm 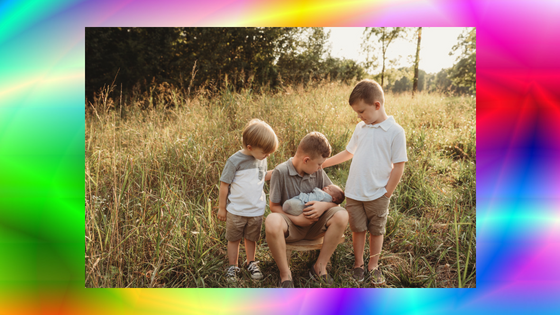 I want to share the story of my rainbows. I want to tell the world about the babies that healed my shattered heart. The little boys who saved a woman from sinking into a grief so deep that there might have been no return. I want to tell you how I’m still standing after the storm.

Eight years ago I was early in my motherhood journey with a beautiful two-year-old that we finally had after facing infertility. We had battled infertility a second time and by the grace of God I was carrying a set of triplet boys. The sun was warm on my face as I breathed in the summer air.

One day a storm started brewing in the distance. It brought with it the death of one of our triplet sons. The storm raged for sixteen long days and nights before it claimed the second and third triplet. I was strong and steady in the storm, but in the end was no match for its destruction.

My husband and I clung desperately to the only sunshine we could see, our two-year-old son. I’ve written before about the amazing ability he had to make me want to stay on this Earth when I thought of nothing but going to be with my angels. He was the baby that gave me a worry free pregnancy and delivery. I was naive to the hurt and pain of losing a child when I carried him. I refer to those first two years of parenting as the “before.” In the “after” he has continued to be one of the most beautiful parts of my life.

However, this isn’t his story I share today. This story is about the babies that came after the storm. The three little boys who put the color back in our lives.

Two years after losing our triplets I was in a hospital bed hearing the long awaited first cry of our first rainbow baby. We had once again faced infertility, but also a scary surgery, and nine long months of wondering if he would survive. Every morning that he was inside my womb, I put my hands on my belly and asked God to save him. I begged for a chance to deliver a living baby. In those days I would have traded anything to give my first son a sibling. 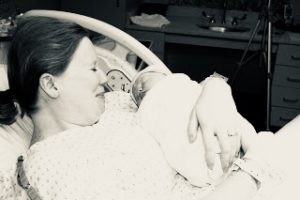 The moment I realized that our rainbow baby was drawing breath.

Our amazing rainbow baby began to heal my heart in those first moments of his life. My body hadn’t failed me this time. I had protected this baby and he was going to live. And live he has. He has continued to be a light in our lives for the past six years. He is his big brother’s best friend, and a ball of energy that keeps our house full of loud noises and excitement.

Amazingly, I gave birth to our second rainbow three years later. And guess what? Four weeks ago today, we adopted our third rainbow baby to complete our family. A woman came into our lives unexpectedly and just knew we were suppose to be Mom and Dad to her baby. So here we are with four perfect boys in our arms, and three angel boys in Heaven.

I would be lying if I said that I came out of the storm as strong as I went in, but here I am living my best life. Four little boys get to be loved by a woman who was once broken and lost, but is now standing in the sunlight once again.

Our sunshine baby, as we call our first son, and these three rainbows have put the color back into our world. You can find my husband and I shaking our heads and wondering how all this happened in just ten short years. How did we come so close to losing it all and end up with cups overflowing?

The only answer I have is that we survive the storm one day at a time. We allow ourselves to feel the pain of loss while also giving ourselves permission to feel the joy.

Our rainbows don’t negate the storm, but add hope and beauty to a story that is still being written.

This story was originally shared on thisbeautifulmomlife.com

The Greatest Legacy of All
A Long Journey to a Full House
We faced infertility for years, then became pregnant naturally
advertisement

The Greatest Legacy of All
A Long Journey to a Full House
We faced infertility for years, then became pregnant naturally