At this point, I've hosted my fair share of toddler birthday parties. I actually consider myself something of an expert when it comes to hosting too-big parties in a too-small space for way too many small kiddos without going nuts. And since my career as a toddler party planner is coming to an end - my little guy will turn four this year, eek! - I wanted to share some of what I've learned with you! Here are eight tips for hosting amazing in-home toddler birthday parties and actually enjoying them, too:

Sweep Before, Mop AFTER
You know, so you don't end up mopping twice as part of pre- and post-party cleanup. Like I did. As much as I didn't want anyone to end up with really dirty socks at my daughter's second birthday party and then at my son's first, the various icing and drips that ended up on the floor killed that dream. A pre-party sweep would have been sufficient. Socks can go in the wash. 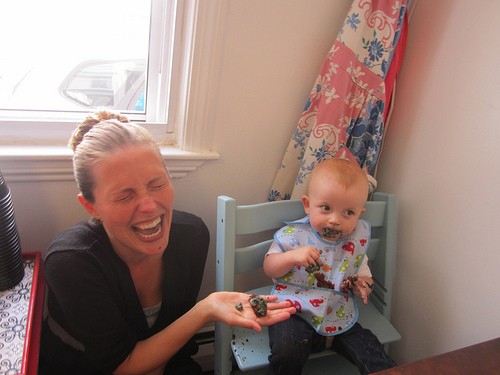 Skip the Chips
Crumbs, much? At my daughter's first birthday party, we had chips in bowls along with all the other food. Bowls in the living room, no less! And one year old kiddies sure do love chips. By which I mean they love to grind them into cracks in the floor and drop them in radiators. I was finding chips crumbs for weeks. At her next party, with no chips served, the post-party cleanup went a lot more quickly.

Brunch Is the Best
Very few people don't like breakfast - and brunch foods often straddle the fence. There's something for everyone at brunch, and that something will usually be less expensive and easier to prepare than fancy appetizers or other party foods. Plus, having cake as part of brunch seems to make sense.

Room Temp Rules
At my daughter's first birthday party, we were running the oven almost non-stop the entirety of the party, and that meant we had the doors open in February because the house got too darn hot! At her second birthday party, I decided that I only wanted to serve foods that needed nothing more than warming or could be served at room temperature. Bagels. Fruit. Pre-cooked quiche. Finger foods. That sort of thing. No one mentioned the lack of hot food at all.

For the Crafty, DIY Saves
Sure, I could have ordered a custom prefab party pack of decorations for the Babby's second birthday party like I did for her first birthday party, but I have a sewing machine and plenty of scrap fabric. For a cost of $0 - thanks, crafty mom friends! - I made rainbow banners, rainbow mini-banners, a tall rainbow party hat, and even a rainbow banner spelling out her name. For my son's birthdays, I've continued to do my best to make do with what I have to keep costs low.

All that yummy food you buy for your toddler birthday party and your awesome cake will delight your guests, but they should delight you, too. After you're sure everything is ready to go and your guests are situated, grab a plate of food and a drink and find somewhere to sit down and relax. Or at least pretend to relax. 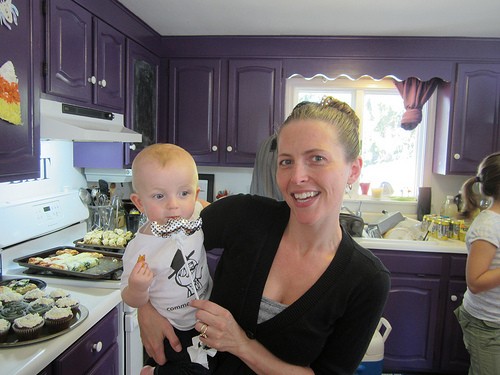 Anticipate the New Toy Influx
There's nothing like a toddler birthday party to make you realize how many toys kids have. (And no, I'm not going to say they have more than I did, since I'm pretty sure I had tons of toys growing up, too.) The day after my daughter's second birthday party, I put a few toys away to bring out later on, bagged up all the really babyish toys to stash in storage, bagged up a selection of other toys to swap out in a few months, and only then distributed the loot. Now we have roughly the same amount of toys as we did last week, but they're age appropriate and novel.

Childproof Like Crazy
The more space the toddlers in attendance have to work off all that cake-fueled insanity, the happier parents will be. My advice: Childproof as many rooms as you can, spread out your toys, put a few chairs for grownups in each room, and watch the adults chill out in the full knowledge that their kids are safe and that your stuff is safe from the kids.

Now one more piece of advice... At the first toddler party I ever hosted, my daughter's first birthday, the guest of honor had some fun. But she also found some parts - the singing, the cake, etc. - pretty stressful. I wish I could go back in time and tone that party down, actually. A year later, though, she seemed really energized by having so many toddlers her own age around and even spent most of the party totally ignoring me and my husband!

That's when it really clicked that the best birthday parties are the ones where the hosts and the guests and the birthday boy or girl can ALL enjoy themselves. These tips should help you plan a toddler birthday party that everyone on your guest list will love!