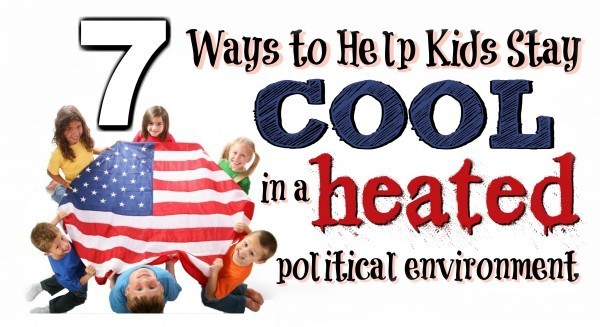 During a heated election year, kids hear more than their share of arguments, mud-slinging and sometimes misinformation dished out in tidal waves. It’s no wonder they’re starting to get in on the action.

A friend of mine recently attended a backyard cookout in which a political argument broke out. No surprise there. Except in this case, it wasn’t the adults engaged in political mud-slinging – it was the kids, all of whom were elementary age!

Where did that come from? Well, most likely from parents and from the media and in the halls of their schools – some of which can be misinformed and dauntingly disrespectful.

The good news is even in a heated political environment, we can help kids stay cool and learn important lessons about character with a few simple strategies:

1. Model respect and tolerance. It’s our job to teach kids respect, acceptance and tolerance because life will be full of people from every color, religion, culture, and persuasion. We have to teach not just with our words, but our actions and our behavior.

When kids see parents mirror the rants they see on television or slip into the same kind of name-calling, bullying, or ugly rhetoric that’s coming off the campaign trail, we send the message that that kind of speech and behavior is acceptable. Our kids in turn might feel it’s fine to confront other kids in classrooms or on playgrounds who think differently, look differently, or speak differently with aggression rather than kindness.

2. Listen before speaking! Before sharing your opinion about the current state of politics, seek to understand what your kids have heard and how they feel about it. Ask:

3. Connect the dots when sharing who you support. Be specific (in age appropriate terms) when talking to your kids about what you are “for” and “against” and why you believe the way you do. Connect the dots between your family values and the policy positions of that candidate - while reminding them others might take a different point of view and that THAT’S OK. 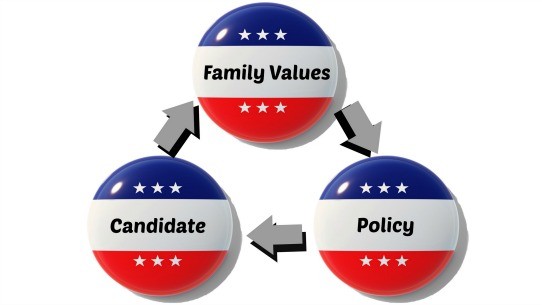 Make sure your kids know they are entitled to their own opinions and they don’t have to support the same candidate as you.

4. Do your research with your kids! Don’t depend on the media for all of your political information. Help your kids do age-appropriate research on the candidates. Talk about the importance of having all the facts and not simply jumping on a bandwagon and repeating what you’ve heard. Discuss how voter’s backgrounds, upbringing and even geography can affect their political allegiance.

5. Take time for training on empathy. Just because kids see adults behaving badly, name calling, and being unkind to others, that doesn’t mean it’s okay. Use the opportunity to teach kids about empathy by asking questions like: How do you think he/she felt when that was said? How would you feel if someone said something like that about you? What can you do if you hear someone saying unkind things about a friend at school? Dr. Michele Borba’s new book: UnSelfie: Why Empathetic Kids Succeed in Our All-About-Me World is filled with strategies to build empathy with kids.

6. Turn it into a civics lesson. Use the election to teach kids about the political process – how presidents get elected, the party system and the importance of voting. For older kids, explain how the electoral college works – if you can figure it out yourself!

7. When it comes to your kids, seize the day. This election season will be a treasure trove of teachable moments – if we seize the opportunity.

Use all that lies between now and November 8 as an opportunity to talk to your kids about respect for our leaders – from the one who ultimately sits in the Oval Office and other branches of government all the way down to their teachers, parents, elders, counselors, and eventually bosses. Teach them about tolerance and compassion. About not jumping to conclusions. About thinking before speaking. About doing your homework before forming your opinions.

In all of these teachable moments, we will raise kids who will hopefully make more educated decisions, treat each other fairly and with dignity, and perhaps even become leaders themselves one day. And that – is something that EVERYONE can cast a vote for!

Amy McCready is the author of The 'Me, Me, Me' Epidemic: A Step-by-Step Guide to Raising Capable, Grateful Kids in an Over-Entitled World and If I Have to Tell You One More Time…The Revolutionary Program That Gets Your Kids to Listen Without Nagging, Reminding or Yelling. Learn more at AmyMcCready.com.

Parenting Expert and TODAY Contributor Amy McCready is the Founder of PositiveParentingSolutions.com and the author of “The ‘Me, Me, Me’ Epidemic” and “If I Have to Tell You One More Time”