7 Tips To Get Your Pickiest Eaters Eating!! 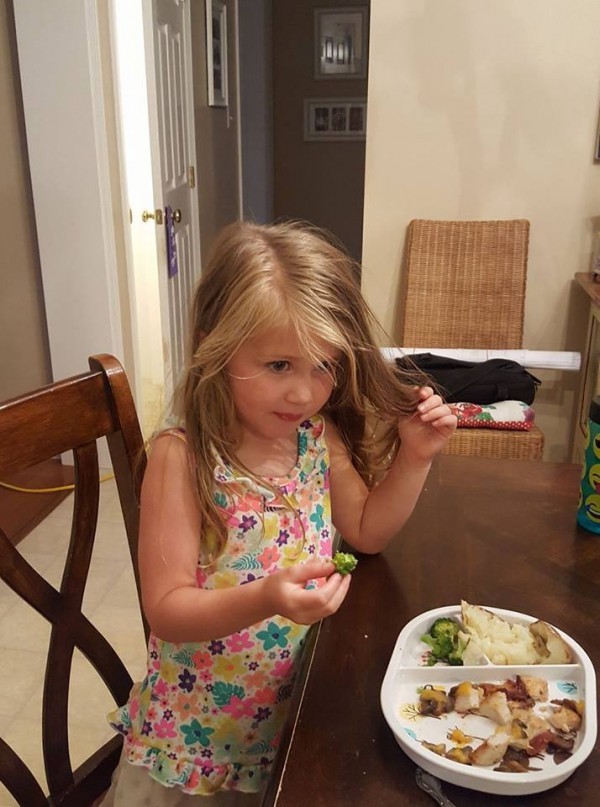 With two little ones at home, I've tried it all and these really work!

1. Tell them they have to lick it.

This might sound funny to us, but it will sound fun to them! The idea is once they lick it, they’ve jumped the first hurdle which is to actually let it get close to their mouth! Then, you can say, “Now take a bite!” and watch them fall to the floor in agony. But it’s worth a try.

When you put something on a stick, kids are instantly game for trying it. Why? Because it’s different, it’s cool, it’s dangerous? Or at least they think it is since we’re always telling them not to pick up sticks or pointy things. Anyways, put it on a stick and I guarantee they will at least take one bite. Oh, and by “stick” I mean a long kabob stick that looks like a very long toothpick, not an actual stick.

3. Let them use a toothpick instead of a fork.

Again, kids like to eat things on sticks and switching up their utensils can be very effective. So, put some broccoli on their plates and put a toothpick in one. They will at least pick it up, even if it’s just to tell you they’re not eating it. But try it! It might work. One time I actually raided my son’s play workbench and dug out his plastic screwdriver and let him eat with that.

Kids love to help cook and are more likely to eat something if they’ve helped cook it. When introducing new foods, let your kids have a hand in the food prep. This will make them more interested and invested in trying it out.

5. Give it a different name.

For the longest time I tried to get my kids to eat cheese quesadillas because they are so easy to make but every time I would give it to them they would ask, “What is this?” As soon as I said quesadilla they would say, “I’m not eating this.” So about a year later, I tried again, but this time when they asked “What is this?” I said a different kind of pizza. They love pizza so they gave it a chance. And guess what? They loved it. Then I told them this different kind of pizza is called a quesadilla.

So, if your kids really love chicken nuggets but won’t eat fish sticks, then tell them it’s a different kind of chicken nugget. You’re putting it into terms they can understand and something they can associate it with so they don’t see it as some weird, new food.

At my house, if you eat your dinner you get ice cream. This works for us because my son LOVES ice cream. But my daughter, she doesn’t really care. She loves cakes and cupcakes and things like that, so her dessert is different. Nevertheless, it works well. Kids are more likely to be motivated to eat their “yucky” dinner if they have something appetizing to look forward to.

When my son was four years-old he suddenly became an insanely picky eater. He just up and decided that the dinners he had always eaten were now disgusting. This forced me to get creative. I told him every time he took a bite of food and swallowed it, I would sing a song and chair dance. He loved seeing me act goofy and sing him a song of praise and this quickly became a favorite way to encourage him to eat. My go to was Celebration by Kool & The Gang but sometimes I would just make songs up and do various hand movements and cheer.

Originally published on Her View From Home.