Published by Tracy Cutchlow on February 24, 2017 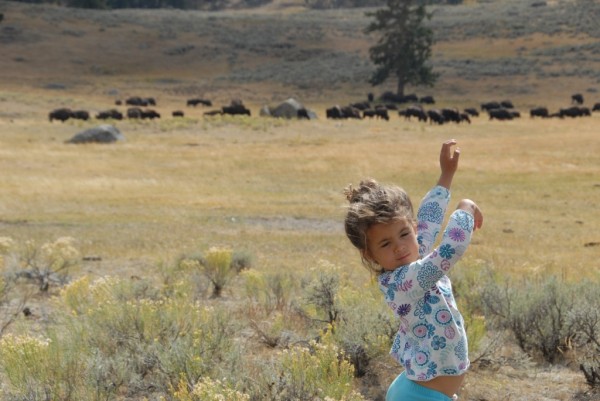 “Should WE try that?”

A friend had just come back unscathed from a road trip to Yellowstone with her 5-year-old, and we thought, “Huh.”

We decided to do it. Of course the big unknown was how G would do on the 12-hour car ride from Seattle to Yellowstone. She’d be solo in the back seat, as my attempts at borrowing somebody’s kid didn’t work out.

I recalled the late-summer trip recently, when revised screen-time guidelines came out from the American Academy of Pediatrics. Some highlights from AAP:

* No screen time under 18 months old (down from 2 years old), with an exception for video chats.

* For kids age 2-5, less than 1 hour per day (down from 2 hours) of screen time, with no screens during meals or 1 hour before bedtime.

* Avoid media as a way to calm kids.

* Early media use has some health risks, including obesity and sleep disturbance.

* Kids will quickly and easily catch up on technology later.

For a couple reasons (what I knew about brain development from working with the author of Brain Rules for Baby, and a startling observation that the TV rendered my nephew zombie-like), my husband and I had taken the screen-time ban fairly seriously in our daughter’s first two years. As time went on, we didn’t see a compelling reason to change that too much.

Fast forward to the road trip last month. We didn’t bring any digital devices for our 4-year-old, and …

I’m certain that her lack of regular screen time is the reason. We broke up the 12-hour drive from Seattle over two days, plus had short bursts of driving each of six days at Yellowstone, plus took two days to get back home. Of course we made plenty of playground and run-around stops. But we were amazed that, for just about the entire time, G was content to: 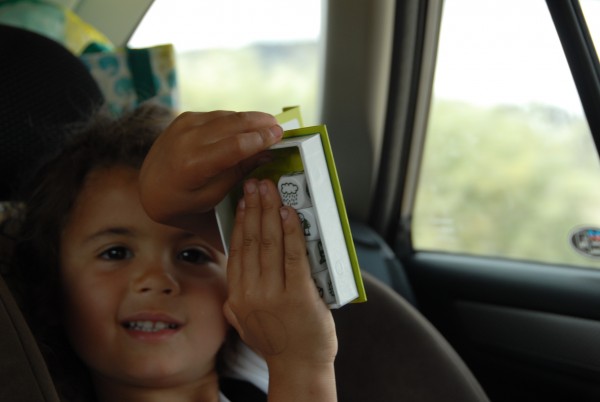 Story Cubes are like dice, but with pictures instead of dots. You roll them, then make up a story with whatever nine pictures you get. I insisted that we take turns. At first G protested, claiming she couldn’t do it. “Choose two pictures,” I said. “Tell me what could happen with them.” Starting small, she gained confidence. “I’m going to pick three this time,” she announced on her next turn. Then four, then five. (Starting small is a great strategy in so many aspects of parenting.)

Stories were such a sweet way to connect during the drive. Some of the childhood memories we dredged up, my husband and I hadn’t even heard from each other.

We’ve seen the benefit of no screen time outside of road trips, too. We see it every day, really, in our daughter’s love of reading, her imagination, the way she observes her environment, and her ability to play independently for long stretches. And oh man, do I appreciate not managing constant requests for devices — or arguments and tears when time’s up.

Sure, there are plenty of reasons to lay off the screen time, which I detail in my book, Zero to Five: 70 Essential Parenting Tips Based on Science. It’s some of the most robust research out there. I applaud the AAP for keeping its ban through 18 months old, making thoughtful updates that address modern situations while remaining in line with current research.

But research can feel theoretical. I wanted to show you just a few practical effects.

All this is to say: If you feel drawn to try these new AAP guidelines, even though the commitment may seem onerous at times, I want to let you know that it is possible. Even peaceful. And, looking back, for my family, preferable.

I encourage you to stick with it. You won’t be sorry.

Bonus download from my book: The Trouble with 2+ Hours of TV (the research) plus 7 ways to avoid that trouble during screen time

Children, Screens, and Why It's Time to Take Back Childhood
5 Pediatrician-Approved Tips for Kids' Media Use
The Blue-Light Babysitter
advertisement

Children, Screens, and Why It's Time to Take Back Childhood
5 Pediatrician-Approved Tips for Kids' Media Use
The Blue-Light Babysitter