Published by @AmyCherrstrom on November 10, 2017

No one can ever really prepare you for what it feels like when your infant sons require intensive care that the NICU offers. It's feels like your joy is cut short, replaced by fear and sadness. You miss your baby terribly even if he is a few floors away or a short drive away at a nearby children's hospital. For a few days, you live through those nurses and doctors. Our first son was born in Chicago, and had no issues. It was a joyful time, uneventful just getting used to being new parents.

Our second son was born, and he had an undetected rare disease called Hunter Syndrome. Although he appeared to be in good health, he began to deteriorate a few minutes after birth, and began to lose his ability to breath on his own. He was rapidly transported to the NICU, and from there he began his fight for each breath and his life. His NICU stay was exactly 17 days, a short day when compared to what other babies such as premie babies encounter. He was known as the "big kid" in the NICU because he weighed 9+ pounds. When I was able to go to his bedside, he looked angelic once the wires and tubes were removed. It was frightening to try and hold him, and often I was worried about the wires and tubes. End to end from arrival to release the staff helps you hold it together when you need it, and get you ready to go home and have a successful life once home! It's an incredible experience. For our second son, Alex, this was only the beginning of his struggle and fight for health and life and a few years later after his NICU stay we found out about his rare disease. Sometimes the NICU is just the beginning signal that there may be more trouble to come.

Our third son was born, as Alex was diagnosed while I was carrying our 3rd son, it was a joyful day. All appeared to be well with Nicholas, despite some small issues detected in utero. We understood there was a 50% chance he could have the same disease as his brother but we were hopeful. For about an hour after his birth, all looked well. My husband cried showing relief that our son might be OK. We felt this overwhelming sense of gratitude. Then Nicholas started to deteriorate, and lose his ability to breathe. As returning NICU parents, we knew the drill. Nicholas fought for every breath, and fought for his life. He made it, and after 17 days was sent home. I can't fully describe how wonderful it is when you return home with your son who has been in the NICU. It feels like a small part of your life returns to normal. We love every parent, baby, nurse, doctor, and caregiver we encountered during this time. It's a bond that no one can quite understand as we live on that edge of fear only to return to normalcy. We know that everyone is not that fortunate, and no matter what we carry that lesson with us every day of our lives.

This upcoming holiday season we think of all the babies in the NICU, and the parents scared for their little ones. We send you hope, love and joy because we have been you. You will return from the edge of fear and loss, no matter the outcome. This experience will change your life, and from it you can change the lives of others especially those little ones entrusted in our care forever. 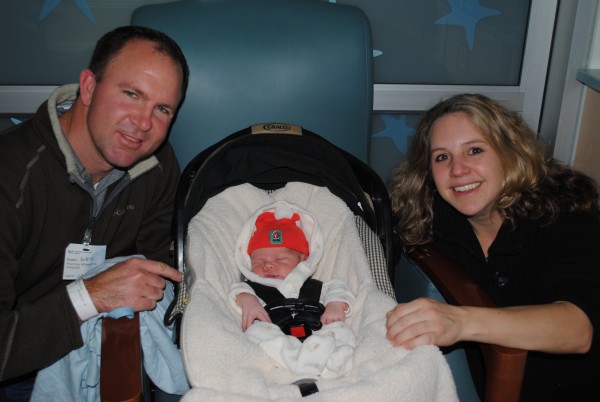 Wife, Mother of 3 boys, 2 with Hunter Syndrome. I'm a passionate advocate for rare diseases. A Silicon Valley, design thinker with 20+ years of experience in the tech industry.

'It was 7 days that changed me forever': My preemie, five years after our time in the NICU
Rigby is Our King and My Hero
Beating the Odds
advertisement

'It was 7 days that changed me forever': My preemie, five years after our time in the NICU
Rigby is Our King and My Hero
Beating the Odds